Part 3 in the story of the pilgrimage through Middle England by Brendan McBear and Chris Humble. In this episode they get to Oxford. 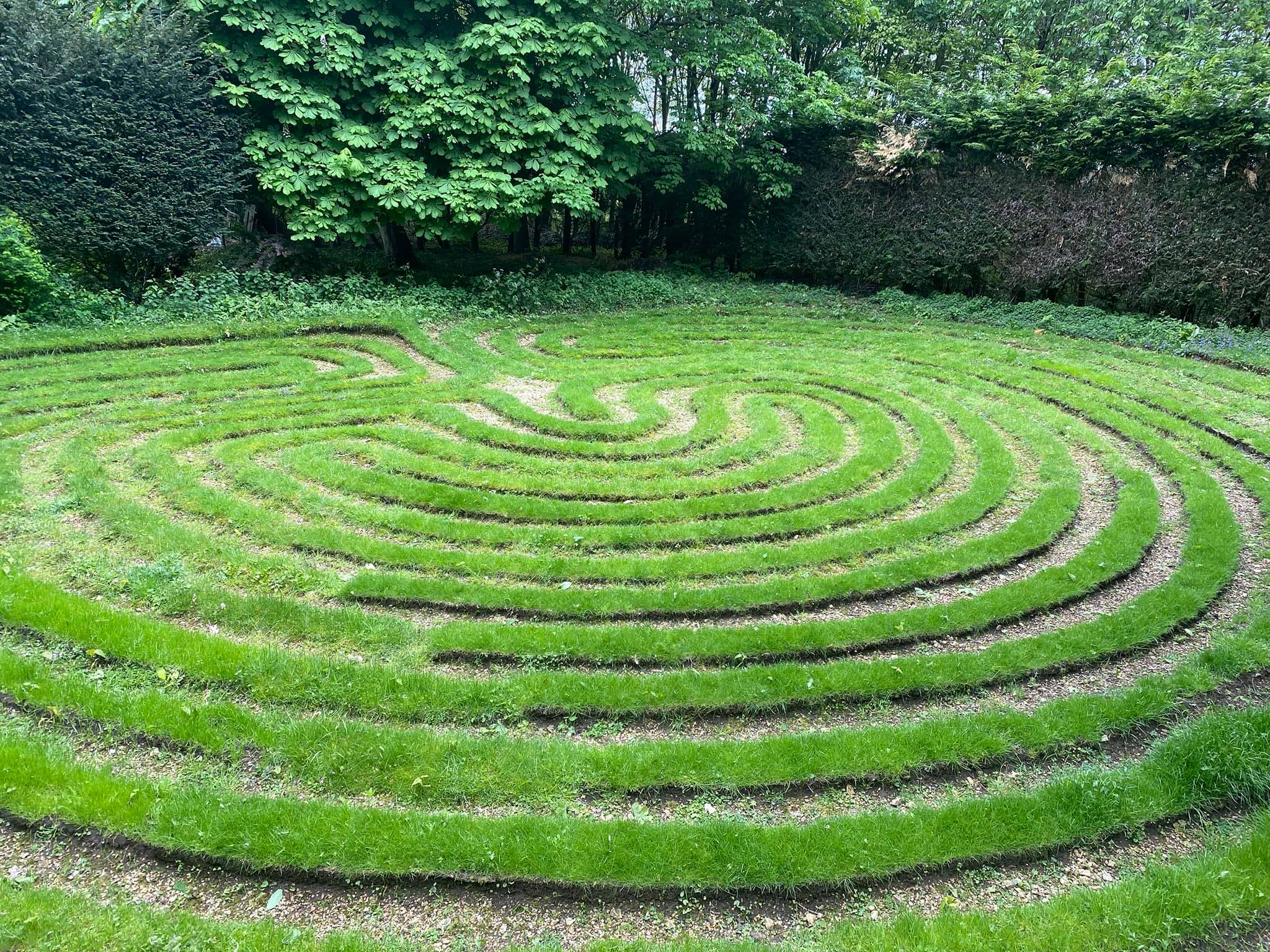 The Troy maze - Photo by Chris Humble, used with permission

Brendan is a bear. He would describe himself as a New Monastic Celt when he’s not too busy taking the mickey out of The Big Eejit or BE – his companion and sometime mentor. His association with Chris Humble began when the Northumbria Community asked Chris to take him on pilgrimage. This is their third and most recent outing, and you will hopefully see why Chris counts on Brendan’s Celtic charm and ready wit to make friends and open doors!

Oxford in the rain

By the time we made it to this seat of learning what we had learnt was that this was the wettest May on record and also that we needed a base for a couple of nights, to wash our socks and whatever else pilgrims (and shepherds) do of an evening. We thought Oxford may be the place, but t’was not to be.

The first pilgrim place on our list was Newman ‘College’, former home, current retreat centre, and shrine to the recently canonised saint John Henry Newman. The realisation that we may be able to stay there for a couple of nights caused great excitement momentarily until we discovered that they were already full.

However, we did enjoy a very informative guided tour of the place and then went to our latest doss house, which – although horrid – was very central, allowing us to find the Martyr’s Monument and the Execution Cross. The latter was extremely difficult to locate (we walked past it six times before doing so) but I’m glad we persevered.

It’s the exact spot where Nicholas Ridley, Bishop of London and Hugh Latimer, a royal chaplain, were slowly burned to death on 16 October 1555, and we could sense the power of the place by standing on the cobblestone cross set in the road (at some risk to our own life and limb, as though it’s in a pedestrianised street that doesn’t count for much in a city full of speeding bicycles!)

Setting off for Aylesbury

It was an early – though still not bright – start for Aylesbury the next morning.

“Sure, the day the big eejit is simultaneously early and bright is one I’m looking forward to, so it is!”

Thank you Brendan, I had almost forgotten about you…

I was feeling the need of a base for a couple of days whilst catching up on laundry etc.

“And I needed to wash my cloak!”

Aylesbury presented itself as a good option for us, lying as it does close to several of the pilgrim places on our list.

In our favourite bus seat (upstairs, on the right, at the front), all seemed right with the world (despite the weather) as we glided from Oxford to Aylesbury. This, we decided, is a very good vantage point from which to see Middle England.

Being rather sick of sub-standard accommodation we opted for the Travelodge on Aylesbury Waterside; a newish establishment pleasantly situated on the edge of the Grand Union Canal, and adjacent to a plethora of amenities, including an Odeon, a Waitrose, a major bus stop, a Wetherspoon, and the town centre – all of which we made use of. Well, except the Wetherspoon. There are limits.

A veritable oasis, and there is much to be said for such town planning when it is well done and sensitively located. Sadly it so often isn’t.

The next morning we were back on labyrinth duty, following the instructions of the Lord of Labyrinths Jim Bailey, and headed for Troy Town turf labyrinth. This necessitated complex bus journeys to Upper Heyford via Bicester followed by a long walk round the perimeter fence of that place’s ‘disused’ (Ordnance Survey) airfield. There were several indications that it may not be as ‘disused’ as OS or whoever would like us to think, including newly surfaced roads, security patrols that gave us hard Paddington stares despite our legal traversing of a permissive path, and fencing that would give Colditz a run for its money.

Eventually we arrived at Troy Farm and were greeted with suspicion and warmth in equal measure from Mrs Power of that establishment. Apparently we should have booked in advance to visit the labyrinth as it is on Mrs Power’s private land and is currently undergoing re-turfing at her personal expense. Nonetheless she told us that she could tell we were genuine, and kindly allowed us to walk the labyrinth (carefully) and even supplied a cup of tea. Brendan was going to ask for a jar of honey but I told him that would be pushing it.

A reprisal of hitchhiking skills

Getting back to Aylesbury proved to be harder than expected. I generally refuse to walk back the way I’ve come (especially when arrest on an allegation of spying does not appear to be completely out of the question) so we walked round in a massive loop back to Bicester and caught the bus back to Aylesbury.

However, we did meet a Buddhist called Adam, and I did get to (unsuccessfully) reprise my hitchhiking skills. I tried this both masked and barefaced and couldn’t work out which look was more discouraging to drivers. Whilst doing so I recalled that my last and more successful hitch-hiking endeavour had been 40 years ago, when I was picked up on the outskirts of Brighton, driven up the A23 at the speed of light, and deposited a buttock clenching 40 minutes later on London’s Kings Road by a record producer in a top of the range Beemer, who told me Jesus was his hero. Those were the days…