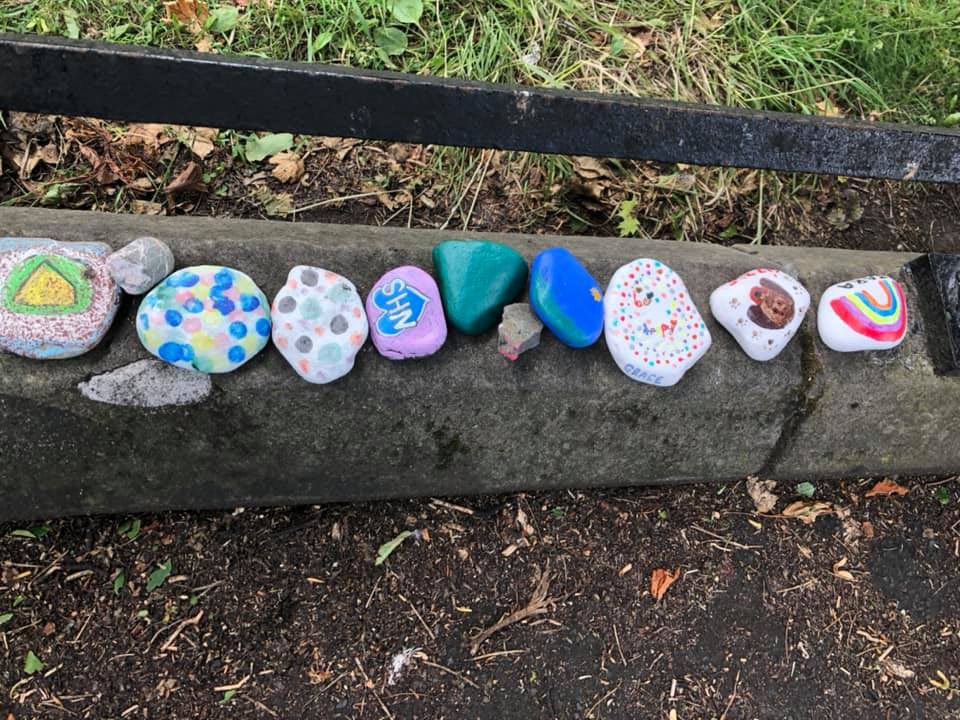 If you take a walk along Osborne Road in Jesmond, Newcastle you may see a rather unusual sight. Lurking beside the edge of St George’s Church Green is a long snake made entirely of painted pebbles.

The idea came from Emily Wallace, one of the organisers of Jesmond Neighbours, a community group set up at the beginning of the Covid-19 crisis as a Mutual Aid group. This group has been involved in supporting neighbours by shopping, picking up prescriptions, and friendly phone calls among other things. Wallace felt that this project would be a natural extension of this community work.

“The Jesmond Pandemic Pebble Python was a bit of an impulsive decision on my part – a friend from Dorset sent me a picture she had snapped in her village while out on her daily exercise, of a snake made of painted pebbles. My first thought was ‘that’s so cute!’ My next thought was ‘I bet our Jesmond group would love to do one of those!’ I asked online to see what people thought and immediately received a really positive response.”

“We had already started a patchwork quilt project (still ongoing) and this seemed like an easier artwork option! St George’s Green was suggested as a good spot, and the church staff very kindly agreed to let us use their wall to place our pebbles. Another neighbour kindly made a sign, and someone else donated some paint so I could start it off. I felt like I had very little to do! I set the pebble head out at 1pm on a Saturday and within 48 hours there were already a dozen beautiful pebbles added. I went back to look at it the other day and counted 161 pebbles!”

Jesmond Neighbours is a busy and creative group. Some members also started a sewing group, which to date has contributed handmade items to the NHS and local care homes. These have included 700 scrubs bags, 30 keepsake hearts, 40 bands for facemasks and  numerous sets of scrubs and facemasks.

Wallace also has this to say about the Pandemic Python:

“There’s a range of designs, some super glittery and some with very delicate patterns, but I think a recurring theme has been some sort of tribute to our key workers…rainbows, NHS workers, or a simple painted ‘thank you’. I think people have appreciated another opportunity to send a message of gratitude, as well as having a lovely visual focal point of community spirit at this time. “Good Neighbours in Byker

Jesmond Neighbours were asked recently  what they appreciated most about the group and how they saw it going into the future. Comments included: feeling better connected, supported and reassured, supporting local businesses and having a real sense of community. As Keith Jewitt, resident said: “I’m incredibly grateful to the people who set up this group, and even when not using it we felt that it gave us reassurance. It’s amazing that it happened  so quickly and always seemed so professionally run. I’m sure that thousands of others feel the same and I hope it doesn’t disappear!”

Overall, the group and the Pandemic Python have been a great success and in the words of one Jesmond resident: “Niceness breeds niceness”