"I doubt if Boris Johnson will resign over this." Analysis by David Taylor-Gooby. 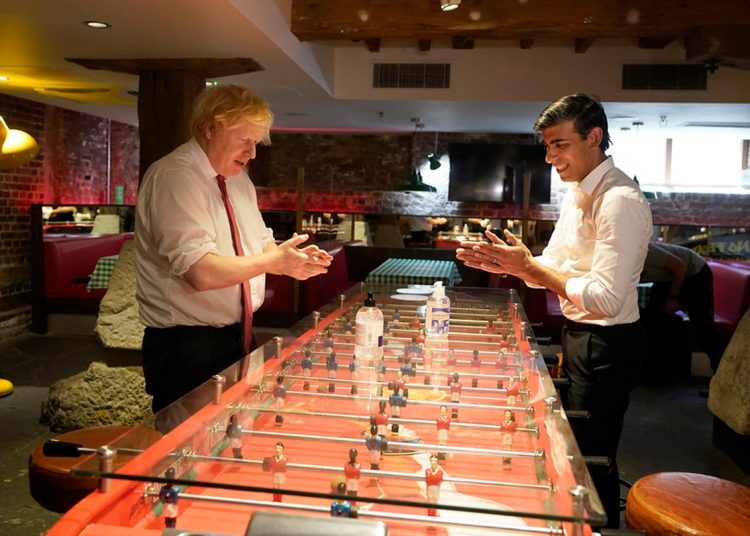 Boris Johnson and Rishi Sunak by UK Prime Minister This image was marked with a CC BY-NC-ND 2.0 license:

So now we have it officially, what most of us knew all along. Both Boris Johnson and Rishi Sunak have been fined for breaking the Covid regulations. The obvious loser is Rishi because he had cultivated a squeaky-clean image as distinct from Boris’ carelessness with the truth and was lining himself up as a competent and honest successor. Partygate and his wife’s tax affairs seem to have finished him.

I doubt if Boris Johnson will resign over this. He will use the excuse that dealing with the war in the Ukraine is far too important and other things will have to wait. In his imagination he is leading the charge and there is some truth in this, given both Germany and America’s hesitancy and Macron’s distractions at home. We must not forget the unity and resolve shown by the EU as well.

Achieving a settlement in the Ukraine will not be the glorious victory that enabled Margaret Thatcher to carry all before her. A shabby compromise is more likely as Putin has to cut his losses.  That is what happened in Afghanistan. This is when the politics of Boris’ future will kick in.

It is worth remembering what happened with the original Watergate. It took two years for Nixon to resign even after evidence pointed to Republican Party involvement and his collusion in the original break-in.  It was persistent pushing by journalists and the investigations by Congress culminating in a proposal to impeach Nixon which made him resign. The same needs to happen here.

What should happen next

Much hinges on what happens in next month’s local government elections. If they go badly for the Tories, many MPs will start worrying about their seats. Boris Johnson will not resign. He never does.  It is up to those MPs who want rid of him to act.  They need to find an obvious successor. I do not think Liz Truss is up to it. Someone such as Tobias Elwood with a strong character, ability and able to lead might be the answer.

But others need to act too.  Labour needs to come over strongly on the mess the Tories are making at home. Soaring fuel bills, rapid rises in the cost of living, and the failure of wages and benefits to keep up need to be shouted about. Labour also has to point out that the Brexit settlement was a bad one and is causing real harm to our economy. Keir Starmer needs to make more use of his able team, not try to do it all himself. We need to see Rachel Reeves, John Ashworth, Lisa Nandy and David Lammy more. Persistent hammering at Boris Johnson will take its toll, particularly if his backbenchers are lukewarm in their support.

For many people this is just one fib too many, but Boris Johnson does not do resigning simply because he has told lies. The “greased piglet” as David Cameron called him, always thinks he can find a way out. But this time people have had enough. Two things are necessary. Many Tory MPs need to discover a backbone, and then find a successor with the ability to do the job.

Labour too has to strongly attack this government for the harm it is doing. Internal Labour Party reorganisation and feuds should be over by  now.  It is time to stop the damage the government is doing to those least able to cope with the economic crisis. I believe there will be a general election before long.