Passage to India: Agra and the Taj Mahal

Chris Humble continues his adventures in India, this time with a visit to the Taj Mahal 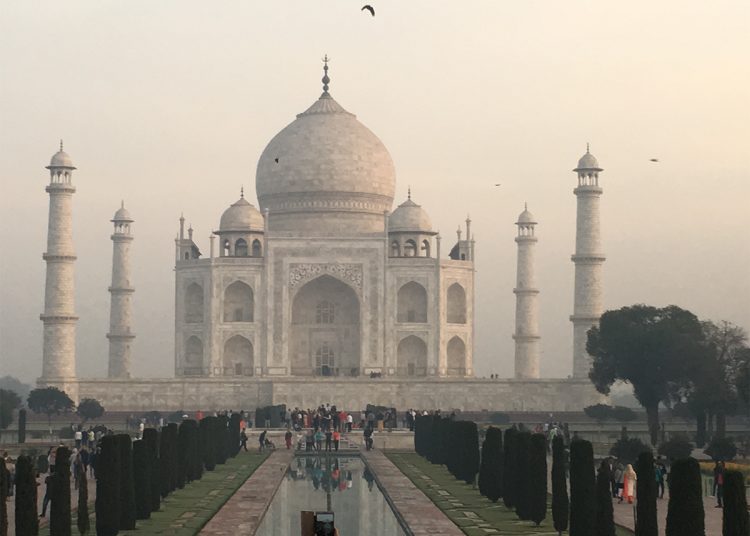 On arrival at my (different) hotel in Delhi I prepared to visit Amir (Part 1) and his family that evening but received a message to say that his cousin had been involved in a road accident and they would have to cancel. Obviously, my concern was for my cousin Adil – who thankfully, although seriously hurt, did not have life-threatening injuries – but I was sorry not to meet Amir’s family.

The next morning my driver ‘Binbin’ (or something similar – I never did pick it up as he was quiet and taciturn) picked me up to drive me to Agra, home of the Taj Mahal. The road between the two cities is an almost deserted 3 lane highway for 150 miles. The contrast with the Delhi roads is extraordinary. Clearly all the drivers are far too busy playing dodgems in the city to venture onto the motorway. However, the same principles of lane discipline are applied, and we spent most of the trip in the fast lane, even though Binbin would not exceed 80km per hour (49.7 miles per hour) despite my exhortations. There is nothing between Delhi and Agra unless you count service stations, so this, the speed, and Binbin’s lack of verbosity made for a monotonous journey. We arrived in Agra to find normal service resumed, wall to wall traffic and beeping horns.

We picked up my guide Asif. I alerted him that I needed the toilet urgently. He stated that it was less than ten minutes to the hotel, which I assured him I could endure. However, that was before the prime minister intervened…again. You will recall that I nearly got gridlocked in Delhi by the Indian prime minister’s imminent arrival at parliament. This time it was the Canadian PM (who was later somewhat ridiculed in The Times for turning up with his family all bedecked in full Indian dress) on a flying visit. All very well for him, but my bladder couldn’t take it. Asif to the rescue; ‘follow me’ he commanded, and we leapt from the stationery vehicle – to Binbin’s consternation – and crossed four (or was that eight) lanes of traffic to use a convenience sited on a roundabout!

We arrived at the hotel, and I had Asif’s next task all ready. On route in the car from Delhi – having failed in my attempts to strike up conversation with the chatty Binbin – I had been listening to ‘Down Under’, Bill Bryson’s entertaining account of visits to Australia. Somehow the ‘bud’ of my right earphone had become detached, and the more I’d tried to remove it from my lug hole the further it had embedded itself. This is how to assess your new guide, I thought – immediately present him with a stream (sorry) of bodily function problems and see how he copes. Unable to remove it using a variety of unhelpful implements (hotel bedrooms not being the best equipped venues for such emergencies) Asif summoned up all his resources and guided me across another six lanes of traffic to an optician’s whom – he assured me – would have an appropriate instrument to help. They did. It was a pair of pliers.

The ‘secret restaurant’ near the Taj Mahal

Hearing fully restored; we took our life in our hands again to recross the road to the hotel. Perhaps realising I was not an average tourist who requires a lie down every five minutes, Asif asked if I would like an unscheduled trip to a ‘secret restaurant’ he knew which had amazing sunset views of the Taj Mahal. I assured him I was up for this. ‘Ok’, he said, ‘But we have to go immediately to be in time’. I raced up to my hotel room to deposit my freed earphone bud and grab a jacket, and we were off – back across the ‘Mad Max’ highway on foot (I was getting better at this) and then into a Tuk-Tuk for a harem scarem ride to a tatty backstreet entrance. One gets used to this in India. The location or entrance to a premises are not necessarily an indication of its quality. We climbed several flights of stairs and, as we arrived on the roof, we were treated to the most breath-taking view of the Taj Mahal, perhaps 800 yards distant, with the sun, right on cue, getting its act together for a spectacular sunset.  And with this amazing view we had a delicious curry and Kingfisher beer. Therefore I (almost) always say ‘yes’ to impromptu suggestions. Say ‘yes’ and you may be taking a chance, say ‘no’ and you’ll never know…

During my dinner with Asif I learnt that his sister was getting married, and, as the eldest son of the family he had the responsibility of making a substantial contribution to the dowry. This comprised buying his prospective brother in-law a $3000 motorbike (when Indian’s want you to comprehend the huge value of something they always talk in dollars). This on a guide’s income of 2000 rupees (about £22) a day – on the days that they have work. I remain uncertain how this is achievable.

Having admired the sunset view, the next morning we visited the Taj for sunrise. Bit of a waste of time as it was cloudy, but at least we avoided the much more substantial queues more present later in the day. Bit of an anti-climax though. First impressions are often the best and this was the case here. From the night before the view from the quiet rooftop had a magical quality. Now on the ground it just seemed like an overrated tourist attraction. Obviously, the herds of tourists – even in the early morning – contributed substantially to this feeling, but I did come away thinking it was all a bit ‘so what’. We went to the Red Fort and another couple of sites which were also a bit yawn inducing.

The following morning, I bid farewell to Asif, who really had done his utmost to make my visit to Agra a good one – despite being let down by the hotel (which was awful) – so I gave him a generous tip and then set off with the consistently boring Binbin to visit some other place – the name of which I can’t even be bothered to recall – ‘on the way’ back to Delhi. ‘On the way’ it wasn’t. It turned a 4-hour (at Binbin’s regulation 80kmh) drive with toilet stops into a 7 hour one, and all for the benefit of looking at yet another fortress type building made of red sandstone, which I was ‘guided’ round by Kareem, who had to be in his eighties and sported the most extraordinary orange hair. If Asif had the award for being the best guide; Kareem would have certainly earned a Razzy. His lack of sensitivity was shown, for instance when I got talking to a young guy excavating the site, who proudly pulled from his shirt pocket to show me a perfect ancient tile with an elephant design on it that he had unearthed that morning, Kareem quickly and literally pulled my face away so that he could carry on telling me which Moghul emperor had done what and when.

I would like to pretend that I now know all about the Moghul empire, but of course I don’t. In brief they were all a canny bunch of lads who looked after their subjects, wives, and a large quantity of mistresses, except for one of them who was a nasty piece of work, killed his brothers and locked his father (creator of the Taj Mahal) in the Red Fort to overlook his creation until his death.

Is two weeks too long?

I was two weeks into my trip and could feel tourist fatigue starting to wash over me. There was some repetitiveness being felt about the places I was being taken to. I was sick of red sandstone buildings and if I had to fend off any more postcard, booklet, and bloody fridge magnet wallahs I felt I would scream. Yes, I enjoy buildings, I appreciate the architecture; I’m far less interested in who lived there, when and for how long and all the other extraneous detail that guides feel they must force feed you, many with impenetrably thick accents that are difficult to understand. Give me the basic info, allow space for me to ask questions, then let me wander around by myself, allow me to soak up the atmosphere, leave me alone! I tried requesting this with Tango-hair, but it cut no ice and he trailed after me spouting his obscure and incomprehensible facts.

The 110th anniversary of the Titanic's departure