Should the Prime Minister be allowed to lie in the House of Commons? A petition to make this illegal has reached over 100,000 signatures. 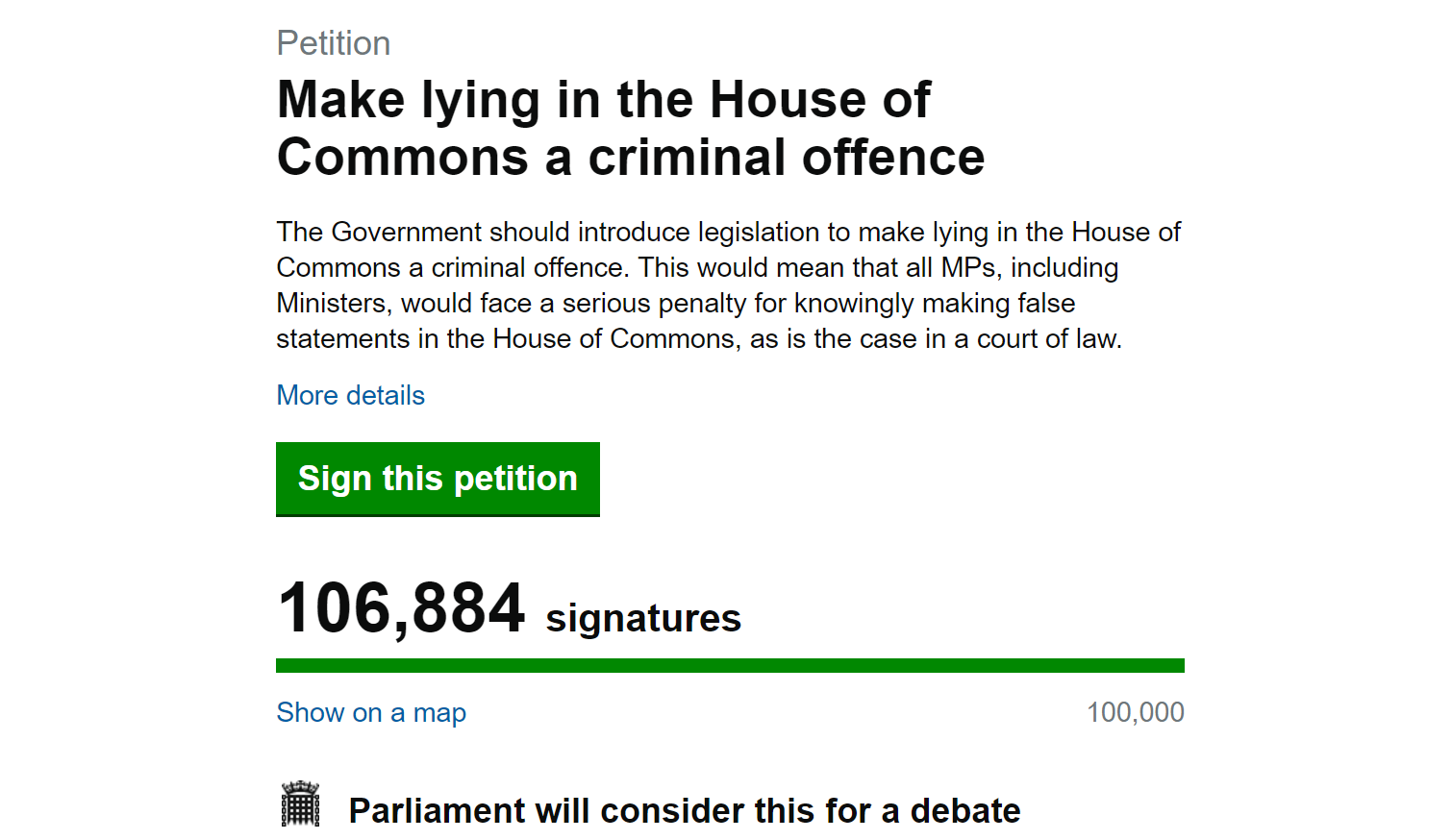 Lying is generally frowned upon but only in certain circumstances is it actually illegal. Being economical with the truth when filling out a tax return, for example (fraud) or giving a false witness statement in court (perjury). But lying in the House of Commons is, apparently, just fine as long as the said liar happens to be the Prime Minister.

Perjury can lead to serious consequences for either the plaintiff or the defendant and tax fraud can have a negative effect on the Treasury. Lying to Parliament can have devastating consequences for the whole nation.

Lying and the Iraq War

Take Blair’s ‘dodgy dossier’ that led to the war in Iraq. The false claims of Hussein’s ’45-minute strike capacity’ on the UK (totally made up) and the ‘weapons of mass destruction’ (pure invention). How many British soldiers died in that conflict? All based on the lies told in Parliament to get approval. Lying to Parliament has consequences!

An assumption of honour

The House of Commons is run on an assumption of honour. Members who knowingly mislead Parliament are expected to offer their resignation to the Prime Minister. But what if the Prime Minister lies to Parliament? Well, so far, the response is “Oh, that’s just Boris”. Imagine if the grieving families of Iraq victims were told “Oh, that’s just Tony” when confronting the government with the lies that were told!

The assumption of honour is not only outdated, it is a slap in the face in this ‘Post Truth’ culture with a Prime Minister who lies as a method of breathing out. The situation has become untenable. Parliament cannot function if even the Prime Minister cannot be relied upon to tell the truth.

It is for this reason that I initiated the petition: Make Lying In The House Of Commons A Criminal Offence. After the first 10,000 signatures, the government is committed to responding. I received a response on Friday 13 August (clearly they are not superstitious). The full response can be viewed here, but it’s worth including the following sections:

“The Government does not intend to introduce legislation of this nature. MPs must abide by the Code of Conduct and conduct in the Chamber is a matter for the Speaker“.

No surprises there then. Interestingly, when I contacted the Speaker’s office some months before I even started the petition (in response to Johnson’s assertion that Bridgend was to become “the centre of battery production in the UK”, regarding electric cars), I was told that the Speaker was responsible for conduct in the House such as maintaining order and adherence to ‘Parliamentary language’ (ie, not calling other members a liar) but not for the veracity of statements made in the House. That, I was told, is a matter for the Parliamentary Commissioner for Standards.

This is in contradiction to the assertion made in the government’s response to the petition, which states: “Conduct in the Chamber is beyond the remit of the Parliamentary Commissioner for Standards. This is because the House has determined that how Members conduct themselves in the Chamber, including their adherence to the principles of public life, is a matter for the Speaker…“. As Adge Cutler and the Wurzels once put it: “Don’t tell I, tell ee”. It’s a meaningless merry-go-round that creates the illusion that there are measures in place to address such breaches. There are not.

Boris Johnson lies with impunity and with a frequency that makes one’s head spin. He is telling the next lie before anyone has a chance to call out the last lie. Dawn Butler was ejected from the Commons for refusing to call his lies anything other than lies, for lies they are. Not errors but lies.

The PM has never apologised nor has he ever corrected the record despite numerous calls upon him to do so. They cannot be interpreted as anything other than lies. Dawn Butler was effectively ejected for telling the truth. So there we have it; lies are fine and dandy but the truth is swiftly dealt with.

This has to stop now! We cannot rely on honour where honour does not exist. The government even used Freedom of Speech as a justification for not legislating against lying to Pariament:

“Freedom of speech in Parliament is an essential part of our democracy. It is a right that enables Parliament to function freely and fully, ensuring that MPs are able to speak their minds in debates, and to represent their constituents’ views without fear or favour. Parliamentary privilege, which includes freedom of speech and the right of both Houses of Parliament to regulate their own affairs, grants certain legal immunities to Members of both Houses to allow them to perform their duties without outside interference“.

Well I beg to differ. Freedom of Speech does not come hand-in-hand with freedom from responsibility. Yes, members are rightly granted immunity from ‘gagging orders’ in order to raise important issues in the Commons. Legislation against misleading Parliament would not compromise this immunity. Parliamentary privilege does not grant the right to lie.

Obviously, statements made in error would not need to be penalised as long as the member in question corrects the record as soon as possible after being notified of the error. Boris Johnson does not do this. Legislation must be enacted to ensure that statements made in the House are truthful and accurate to the best of available knowledge and any errors publicly corrected in a timely manner.

Johnson would, of course, continue to lie in interviews and press conferences outside of the Commons and we must learn to take everything he utters with a pinch of salt. After all, that’s just Boris, isn’t it? We wouldn’t want the poor man to suffer anaphylactic shock from his truth allergy. But, at the Dispatch Box, we expect the truth and nothing but the truth and where honour fails, the law must step in.

This petition would not have reached the number of signatures it has (106,567 and climbing at time of writing) without the input of Peter Stefanovic. His endorsement sent it through the roof! We all owe him a debt of gratitude for his part in publicising the PM’s dishonesty and bringing this petition over the line. It now more than qualifies for consideration to be debated.