A landscape of massive factory farms with GM crops behind CCTV and barbed wire, hedgerows ripped out and wildlife assaulted by pesticides, habitat loss and monoculture – is that a future you want to contemplate? 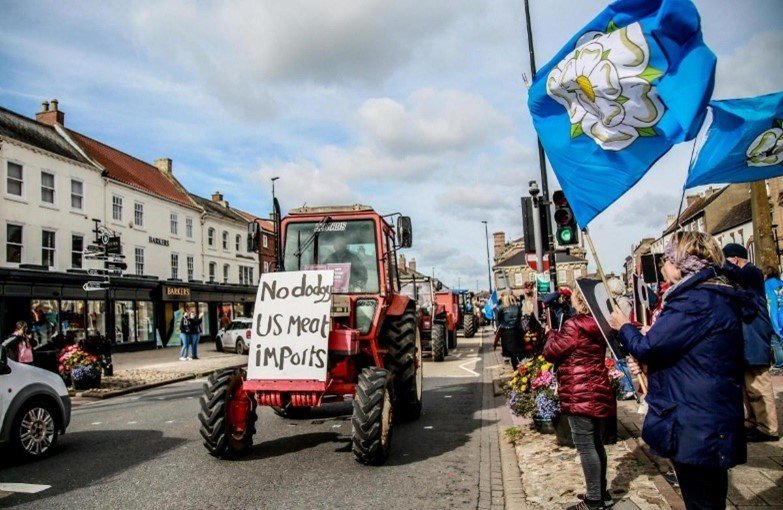 Save British Farming protest in Northallerton Photo by Sarah Caldecott

The streets of Northallerton are well used to the sound of tractors, especially at this time of year, but last Friday heard a different noise. Joining the rumble of 14 agricultural vehicles was clapping, cheering and voices raised in horror at the prospect of a bleak future for farmers in North Yorkshire and countrywide.

Organised by Save British Farming, this latest in a series of protests against the Agriculture Bill currently being debated in Parliament saw angry crowds addressed by local farmer Graham Clarke, Lord Dick Newby, Richard Sadler (NY4EU) and myself, Jon Johnson (#3.5%).

Chief among the concerns are the prospects of the bill becoming law without vital protections for our food and countryside which were promised in the Tory manifesto in 2019. These promises would

All of these basic protections face the axe so that the Tories can push for trade deals which will enrich big companies and themselves at the expense of the health and wellbeing of the whole nation.

Chancellor Rishi Sunak’s constituency (Richmond) was chosen as he has voted in favour of preserving the safeguards – albeit accidentally! – and is evidently a big supporter of local farmers, if his website is to be believed. A letter was later delivered to his constituency office asking for assurances that he would honour this support by voting for amendments to the Bill when it returns to the House of Commons in early October.

Local feeling is running high; Shan Oaks of the Green Party said “it will be a huge step back to allow inferior products into the UK market, especially at prices that undercut higher-quality local produce”.

Food and animal welfare standards are lower in many other countries, meaning cheaper imports but based on the widespread use of hormones and antibiotics, chemical treatments and cruel factory-farming practices. “By scrapping our safeguards, we face the triple whammy of tariffs to export, the need to maintain the EU standards we currently operate in and cheap imports as well. It will mean ruin for huge numbers who are just getting by right now” said Mr Clarke, who farms crops and livestock near Bedale.

Lord Newby, commenting on the decisive defeat for the Tories’ Bill in the Lords last week, said “When this Government says ‘trust us’ you have to double lock your wallet. Worse, this Bill will only be debated for 90 minutes, so keep pressuring your MP”

There is a great deal of misinformation about all farmers voting for Brexit but this was not the case. Many small farms and tenant farms will be ruined if this Bill becomes law, with thousands of rural jobs lost and food prices pushed further out of reach for many families already struggling with Covid-19 and an uncertain future.

A landscape of massive factory farms with GM crops behind CCTV and barbed wire, hedgerows ripped out and wildlife assaulted by pesticides, habitat loss and monoculture – is that a future you want to contemplate?

This is about farmers’ long-term livelihoods and we owe it to future generations to do all we can to protect them. If we’re going to do anything about this we need to do it now before it’s too late.”