“Politicians shouldn’t run scared of seeking changes to our relationship with Europe”: new report from Another Europe is Possible

AEIP's report is an agenda for change. 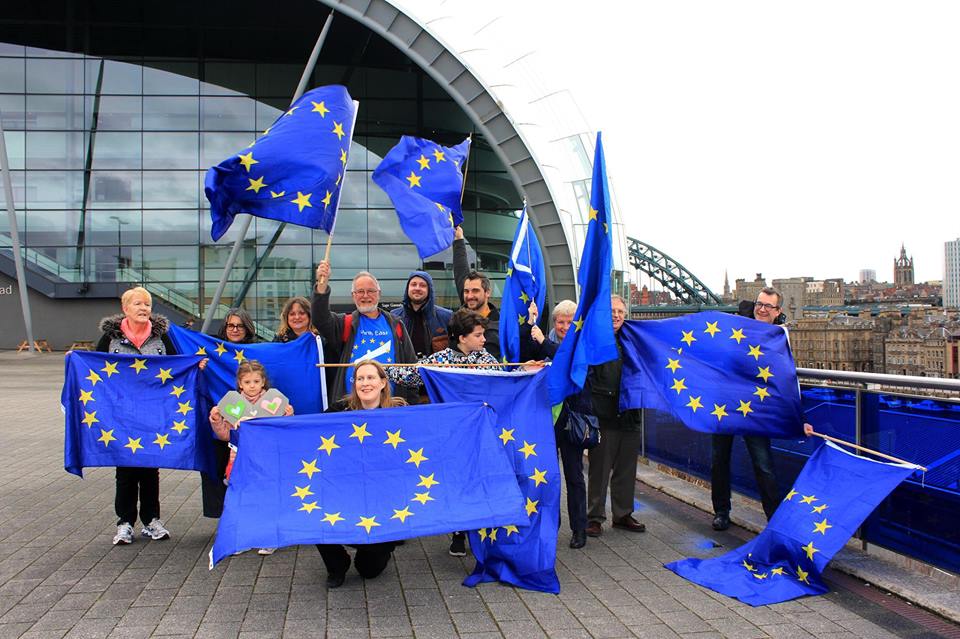 Protestors with EU flags at the Sage Gateshead Photo by NE4EU

I sat down to write this as my former MEP colleagues in the European Parliament prepared to vote to ratify the EU-UK Trade and Cooperation Agreement (TCA) just three days before the current temporary arrangements were due to expire. After postponing this historic vote several times due to concerns about the UK being a trustworthy partner the vote finally passed in the plenary, thereby avoiding the possibility of yet another cliff-edge No Deal Brexit.

Brinkmanship on both sides has been a hallmark of this bitter and unnecessary divorce, driving a diplomatic wedge between our countries and making us all poorer, materially, socially and culturally, whilst also destabilising peace on the island of Ireland. Although the true cost of Brexit will be temporarily masked by the economic crisis caused by the Covid-19 pandemic, we are already counting the cost on this side of the Channel. The Digby Jones Index was started as a belated response to a statement by a Brexiter Lord in 2016 saying “a vote to leave the EU would not result in a single job in Britain being lost”. The Index makes for a depressing read with jobs being lost across a wide range of sectors from aviation, car and bicycle manufacture to losses in the food and drink industry, from pharmaceuticals to legal services, from designer goods to dog chews.

So here we are nearly five years after the disastrous referendum at yet another watershed moment. What should our response to this ‘historic mistake’ be? To ‘take it on the chin’ in Boris Johnson fashion or to fight back? Contrary to the government’s line that we got a good deal, the TCA is in effect a hard Brexit which offers little to folk on either side of the Brexit argument, hence Brexiter James Dyson’s relocation to Singapore whilst other prominent leavers have been busy furnishing second homes including in places like Malta and Cyprus where it’s possible to buy yourself EU citizenship for as little as €1,150,000.

It is tempting to forget the efforts of the last few years, the historic marches with more than a million on the streets, the camaraderie and friendships founded in common cause, the politicisation of an erstwhile apathetic electorate, the nearly moments. We were so close to achieving our goal of a confirmatory vote on the deal, only to have it snatched away through disorganised opposition.

Another Europe Is Possible (AEIP), originally founded in February 2016 to make a broad Left progressive case for remaining in a reformed EU, is still however one of the most dynamic anti-Brexit campaigning organisations. It is AEIP that was responsible for the headline-grabbing banner drops off Westminster Bridge along with coloured flares, and similar actions around Tufton Street (the de facto Brexit HQ) as well as the huge unfurled banner filmed from the air by Led By Donkeys at a People’s Vote March.

When Brexit finally happened on 31 January 2020 AEIP did not shut up shop but focused instead on creating an Alternative Brexit Mandate, campaigning for migrants rights, and organising information and solidarity events with a wide range of international campaigns such as supporting Belarusian trade unionists and ongoing action with the Stop Trump movement.

Now there’s a new AEIP report which clearly identifies a series of critical failings in Boris Johnson’s Brexit deal and offers a clear and concise roadmap for a better relationship with Europe. Authored by the LSE’s Luke Cooper, the report lays out the problems of Johnson’s Brexit deal in simple understandable language which makes it an excellent campaign tool. Cooper demonstrates that the Brexit settlement the Tories have negotiated is unsustainable and wasteful even on its own terms, giving us less access to EU benefits than countries like Moldova.

However, since the 2019 General Election, most politicians have shied away from proposing changes or alternatives to the Brexit deal, with Keir Starmer even suggesting that Labour would not alter the text when in government. However, the report highlights the overwhelming public appetite for looking again at the deal, with around three quarters of the public saying in recent polls that they expect and welcome at least some changes to the Treaty.

Putting forward the case for a new, progressive relationship with the EU, the report recommends a number of changes including a mutual rights agreement for UK and EU citizens in order to reinstate free movement, and re-joining EU programmes such as Erasmus+ and Horizon on the basis of common interest. The report also recommends promoting a democratic economy, with state investment and an industrial strategy sitting alongside strong protections against cronyism. Given the rampant contracts for Tory chums witnessed over the past year (and now being challenged in the courts), I would wager that most decent patriotic Brits would back stronger protections.

“The British public are more nuanced on Brexit than the media and political class give them credit for,” says Cooper, “so politicians shouldn’t run scared of seeking changes to our relationship with Europe. The public support strong environmental standards, support for industry and manufacturing investment and a fair deal for farms and fisheries. They are not obsessed with absolute sovereignty above all else and would happily support a progressive deal that works for the UK.”

AEIP’s report is an agenda for change. It suggests a basic level of cooperation so that we can respond to the major crises of this century: from runaway economic inequality, environmental destruction to the threat of nationalism and authoritarianism.

“A new settlement between the UK and EU has to rise to these challenges,” says Cooper. “The Biden stimulus plan in the US shows what is possible. We need a new internationalism globally to unleash this potential.” And that is why Another Europe is Possible exists – to fight for a future of solidarity between people across borders. You can find out how to get involved here.

Something for everyone at Jesmond Community Festival, Newcastle: launches on 1 May