A North East family was delighted to stumble across a ‘box of delights’ that containing priceless memories. 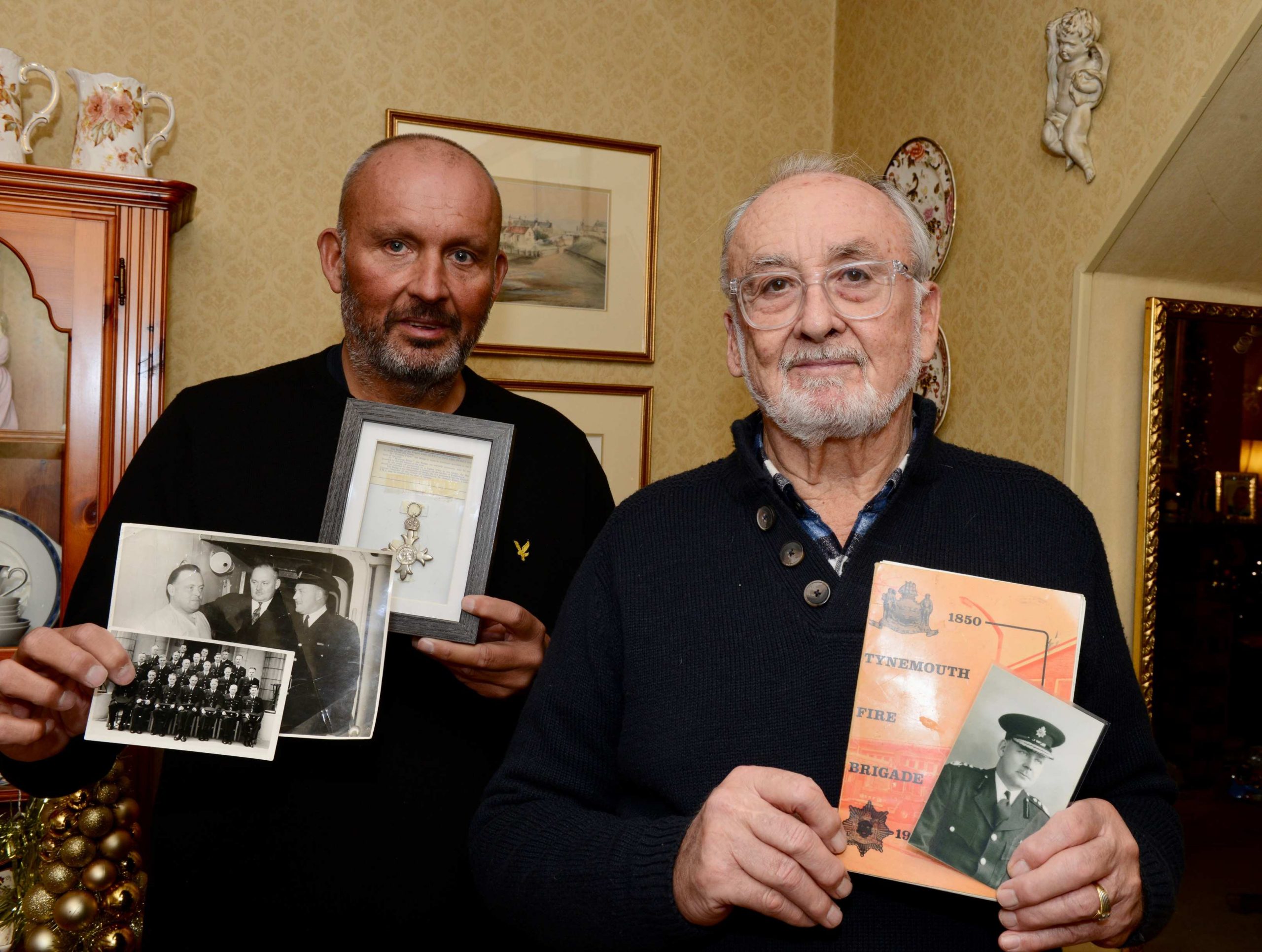 A local Northumberland and North Tyneside family were delighted to stumble across a ‘box of delights’ that contained priceless memories of a beloved father, grandad and great-grandad.

Scott Andrews and his dad Wilf, of North Shields and Holywell, recently rediscovered a selection of nostalgic treasures featuring Wilfred Andrews Snr – who is remembered, still to this day in this neck of the woods – as being a local law enforcement and fire service legend.

In 1957 at the age of 48, Wilfred Andrews Snr was so well regarded in the region that he went down to London to receive an MBE for his services to the local community from Her Majesty the Queen.

The respected pillar of the community was born and bred in Blyth, Northumberland and right the way through his life and career he was proud of his North East roots.

Wilfred Andrews started off his blue light career back in 1932 as a Police Constable walking the beat in Tynemouth.  He then enjoyed a busy and aspiring 13-years of activity in the Fire Service working his way up the vocational ladder.

The career rollcall for Wilfred Andrews MBE was impeccable it included:

When Wilfred Andrews Snr retired from life in the emergency services he pursued a couple of other avenues including working with his family in the local amusements trade, also as a chief security officer – before taking over as the landlord of The Three Wheat Heads in Thropton near Rothbury.

“Everyone knew my dad”

“As a little lad growing up in North Tyneside I had to always keep my nose clean and be careful what I did as everyone knew my dad,”

During the early years of Wilf’s life he quite literally lived and breathed the fire service as he lived at North Shields Fire Station with his parents until he was three-years old.  The building is still standing and people know it now as the Bell and Bucket public house.

“It was quite good growing up in a fire service family. I used to go down to a number of the fire stations with my dad.  I loved all of the different yarns he used to spin about the fire brigade including dramatic stories about some of the fires he’d attended.

Wilf didn’t follow his dad into the emergency services, instead he chose the world of leisure and entertainment as for many years he played a major role in Spanish City, Whitley Bay – where he worked for Miller’s Amusements – alongside his sister Una.

He later went on to own The Plaza in Tynemouth, a popular coastal attraction that for residents and tourists alike was the place to be for fun and excitement.  Staying with the link to the fire service, the Victorian building overlooking Long Sands was destroyed in a devastating blaze back in 1996.

“I’ve always been very proud of me dad, and for what he achieved. People used to come up and tell me what he was like during the war.  He seemed to be a courageous type of guy, and when he died, a Police Inspector said some nice words about him – saying that he was always the first person in when there was a fire and he would rally the crews by telling them ‘…come on lads let’s get it sorted’”.

Wilfred’s MBE hangs with pride of place in Wilf’s home office. It accompanies the other heritage items of the Defence medal, the Certificate from Her Majesty the Queen (that came with the MBE), and a selection of wonderful archive photographs from yesteryear – that they recently rediscovered.

Scott Andrews, aged 50, grew up in Whitley Bay and currently lives in North Shields. He works in the legal services industry specialising in licensing.

“It’s all about the importance of family.  We are always talking about our Grandad as he’s an integral part of our history. We’re extremely lucky to have someone who lived life to the full and had an amazing lifetime of stories to share with us.”

Wilfred Andrews Senior was truly a firefighter until the very end, as a vintage fire engine from Tynemouth Community Fire Station led his funeral cortege in January 1990 when he was lay to rest. An appliance that in 1951 Wilfred actually brought to the region himself when he drove it from the Dennis Factory in Guildford all the way up to Tynemouth – when he was Chief Fire Officer of Tynemouth County Borough Fire Brigade.