Urgent appeal from campaigners to join them at Derwentside IRC. The vans have not left yet. 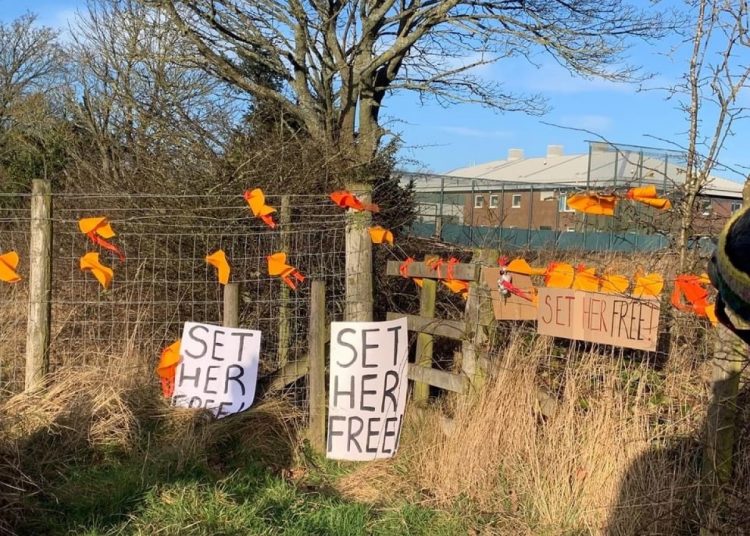 Today (Wednesday 29 June), campaigners from across the North East are standing outside the Hassockfield/Derwentside Immigration Removal Centre to oppose the deportation of more than ten women to Nigeria on a Home Office charter flight at 10.30 pm tonight. Already five people have been arrested and campaigners are calling for more people to join them, They say that there is still time to stop this flight.

Women asylum seekers are amongst the most vulnerable people in our society and they deserve our attention and compassion. This demonstration is happening with No to Hassockfield and Women for Refugee Women who are at the Royal Court of Justice today to challenge the Home Office regarding the lack of access to legal advice within the centre.

‘The Home Office has said that that there are currently 51 women imprisoned in Hassockfield/Derwentside IRC. Of these 13 are women who have previously been in prison, 3 are port arrival (sea or airport) and 35 ‘other’ immigration cases, 16 of whom are currently having asylum claims analysed’. Under their own laws, this means, even without further legal advice, almost a third of the women imprisoned in the centre should not be there and should be released immediately.

A statement by Women for Refugee Women

“The government chose to lock up women at Derwentside without provision for them to access in-person legal advice, which has severely damaging consequences for their cases:

The reason for this appears to be due to the shortage of legal aid providers operating in the North East of England.

Following the latest developments in government policy, such as the recent policies on Rwanda offshoring, the need for proper, in-person, legal advice at Derwentside IRC is more pertinent than ever. It is now clear that women have not been excluded from the government’s offshoring plans, and that anyone in detention facing removal to Rwanda will only have 7 days to challenge this decision.

The government is harming women and locking them up without access to justice. That’s why, for the first time ever, we (WfRW)are taking them to court. “

Cited in the legal challenge is the poor mobile reception inside the building and its isolated location, far from any of the legal support systems available at other sites of detention.

Emma Pearson from No To Hassockfield said;

“Deportations are violent, racist, and traumatic. They lead to the tearing apart of families, they push people into danger, and they have lifelong implications on individuals.

“Unlike other Immigration Removal Centres where men are detained, women at Derwentside have no access to in-person legal aid which means they are being discriminated.

“We’ve heard of a woman who is in her 60s who has been in the UK since the 1980s and has chronic health conditions.  Another, over 50 years old, been in the UK for over twenty years who is a victim of torture and who also has severe health issues. Many of the women scheduled to be on this flight are not only being unlawfully detained as a result of not being able to access legal support, but also unlawfully deported.

This charter flight is a huge mistake. The airline facilitating this flight, the Home Office, and Priti Patel should all be deeply ashamed to have played a part in such inhumanity.”

Dr. Helen Groom from No To Hassockfield added:

“Today we may see wrongful deportations to Nigeria because of the lack of legal support. Grandmothers, wives, daughters are being sent to a country where some of them haven’t lived for over 25 years.

“We know that, if given legal support to their case, many of those seeking asylum in detention will be granted leave to remain. These women are not going to ‘abscond’ – they want to be here. Detention is harmful and unnecessary.

“Forced removal, without recourse to the law of the land is inhumane and not worthy of the UK.”

Updated: 19:40 Very sadly the van has now left. Well done to those who protested. As the tweet says “Our hearts are breaking for these women.”

South Tyneside's parade set to be the most colourful yet