Residents made cardboard cut-out body shapes, each one representing a company or number of jobs at stake in the event of ‘No Deal’. 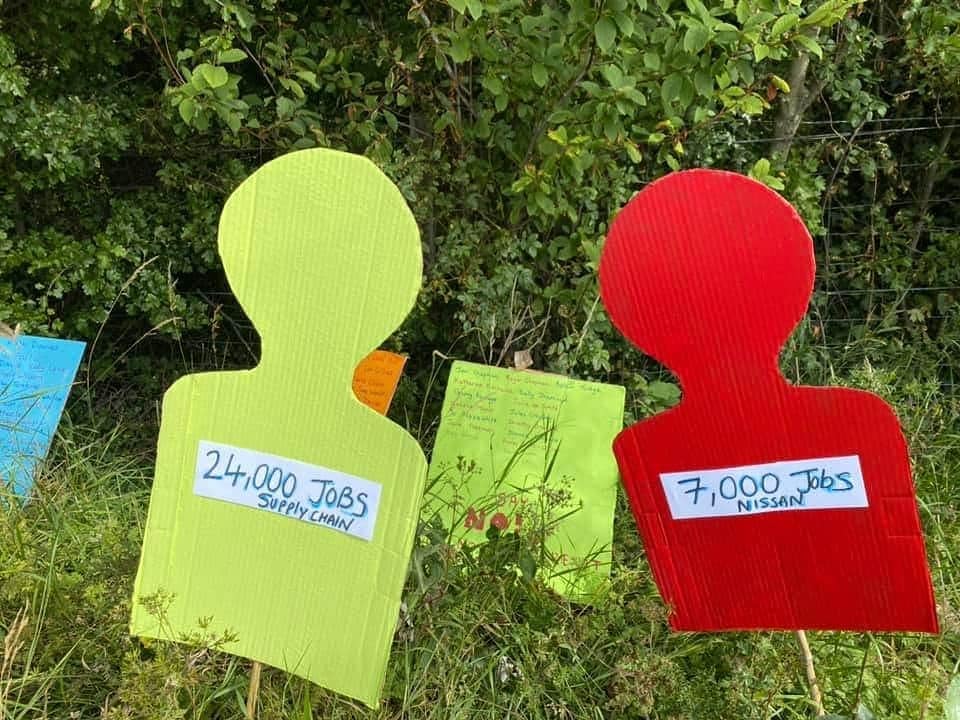 I joined a protest of local residents outside the Nissan factory on Monday 20 July. It wasn’t planned, though as protests go it was a pretty good cross section of society who gathered in masked silence. We were furloughed employees, students, health professionals, retirees, and one on night-shift who came before going home to sleep; all of us worried about the loss of regional jobs should there not be a trade deal with the European Union.

Our numbers were necessarily few due to the government restrictions on protests during the pandemic, but our presence was endorsed by signatures on placards of the many who wanted to be with us.  The strictures of life with Covid-19 have changed the manner of protests, not our ability to campaign for the best possible future for the North East.

In addition to the placards, residents made cardboard cut-out body shapes, each one representing a company or number of jobs at stake in the event of ‘No Deal’.  The shapes rocked gently in the early morning breeze and seemed to emphasise the precariousness of these jobs.

Spokesperson Louise Brown said: “Now that the government has refused to extend the transition period, a No Deal Brexit has become increasingly more likely … The North East stands to be the worst affected by a No Deal Brexit. Nissan has said that the plant in Sunderland will not be sustainable in the event of a No Deal Brexit.  In addition to the 7,000 jobs that would go at the actual plant there would also be the loss of thousands of jobs connected to it within the supply chain”.

The protest is not against Nissan. We are there to show our support for those who work for the plant and those who work in the supply chain industries and services. The protest is about trying to protect jobs in the region. You can read our open letter to Nissan workers here.

We protesters have the resilience common to all in the North East.  We will carry on and campaign for a good outcome from trade negotiations with the European Union, so that Nissan and all supply-chain businesses in the region may flourish.