Campaigners continue to protest about the controversial Hassockfield/Derwentside IRC where women asylum seekers are now imprisoned. 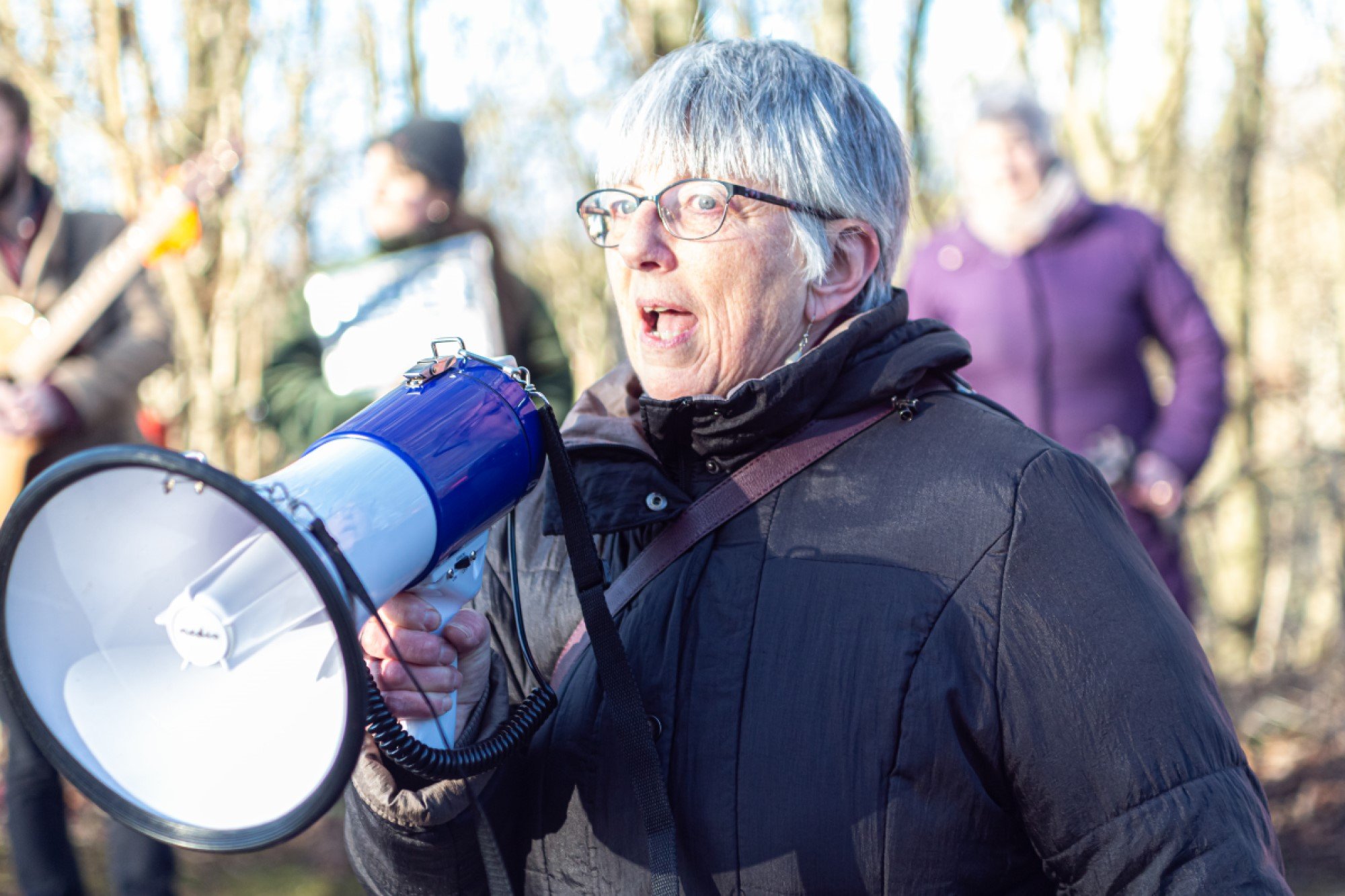 Dozens of human rights campaigners mounted an emergency demonstration at the controversial Hassockfield/Derwentside Immigration Removal Centre (IRC) on Sunday 2 January in order to show support for women sanctuary seekers who are now incarcerated there. After months of obfuscation, delays and secrecy a small number of women were finally transferred to the category 3 prison near Consett from Yarl’s Wood in Bedfordshire, in between Christmas and New Year.

Home Secretary Priti Patel had announced the opening of the detention centre on 23 November 2021, two days before 27 people drowned in the English Channel trying to reach safety. The IRC had originally been scheduled to open in mid-Autumn run by the private company Mitie whose record on employment rights and other issues is extremely poor.

The facility has been renamed Derwentside IRC in a blatant attempt to try and erase the appalling history of abuse that occurred when hundreds of boys were locked up there over several decades. Five former officers have already been jailed for their part in the abuse with many more thought to have been involved in what was probably an organised paedophile ring.

The site was initially earmarked for a housing development with a pocket park. But the government has ridden roughshod over local planning processes. It is thought that approximately 80 vulnerable women will eventually be locked up in the IRC. The campaigners say it is imperative that the women know they are not alone and have pledged to maintain regular vigils and noisy protests at the site until it is closed.

“Our work goes on to push for closure of the facility but right now we must continue turning out at Hassockfield so that the women incarcerated there feel reassured they’ve not been abandoned by the outside world. Groups taking similar action at other detention centres know from experience how they’ve helped to maintain morale and reduce detainees’ sense of isolation.

“So on Sunday, hoping our voices would reach them, we chanted ‘Set her Free’ and ‘Refugees are Welcome Here’.  We sang ‘We shall Overcome’, a universal song that would be easily recognised inside the walls. And we held our banners and placards high, tying bright orange heart-shaped messages to the perimeter fencing and trusting they’d be visible from the prison windows.

“In the weeks ahead, we’re confident that word of our support will reach the women and they’ll know the outside world has not forgotten them. But that means being there and not giving up. Every one of us turning out in the winter cold will be offering hope and comfort to someone’s mother, daughter or sister.”

Agnes Tanoh from Women for Refugee Women who has worked tirelessly to get Hassockfield/Derwentside closed down, said:

“This is personal for me. I claimed asylum here because I was being persecuted in my country and I thought I would be killed. But I was locked up at Yarl’s Wood for three months in 2012. I was put there because the solicitor who was working on my case didn’t do it properly. I suffered so much and for no reason.

“Now, the government has agreed that I should stay in this country, and I have refugee status. I dedicate my time to supporting other women. I know how detention destroys a woman. Women become depressed and suicidal in detention. I don’t want to see this happen to any of my sisters who are looking for safety.”

Emma Pearson, one of the protest organisers, said:

“From the outset, this immigration prison has always been advertised as an excellent employment opportunity for locals. This area does need investment and job creation, but these jobs do not need to be founded on the inhumane incarceration of already vulnerable women. At no point did locals get asked what they wanted the site to be used for or what jobs they thought would be beneficial.

“The fact that this is a prison for women is particularly concerning. Derwentside (Hassockfield) IRC will be facilitating state-funded violence against women who are simply seeking safety, sanctuary and security. The government is not telling the public that the women detained there are locked up for unjust and unnecessary administrative purposes. They also aren’t telling the public that over 50% of those detained are ultimately released back into UK communities. In 2019, this figure was 70%.

“The opening of this new Immigration Prison goes against previous government pledges to reduce the number of IRCs. It is an abuse of taxpayers’ money. It is an outrage for locals seeking good quality, status-secure jobs. And it is a blatantly racist attack on human rights, women’s rights and international law. Women are now imprisoned at the site and it is incredibly important they know we don’t want them locked up, and that we will continue supporting them by raising our voices in the public domain until they are released.”

The UK is out of step with international human rights norms regarding its treatment of asylum seekers. We are the only country in the 47-member state Council of Europe that practises indefinite detention whereby people seeking sanctuary are held for months if not years not knowing when their nightmare will end, if they will eventually be given leave to remain or whether they will taken in the middle of the night to be deported.

The government is also out of step with the Conservative-LibDem elected administration of Durham County Council who passed a resolution in July 2021 stating that the use of the site for an IRC is not acceptable. The IRC is also opposed by local faith communities who demonstrate their strength of feeling via regular prayer vigils. At all levels of society therefore the IRC is viewed as an abhorrent inhumane monstrosity which must be shut down.

Research by Women for Refugee Women shows that over 85% of the women who had been detained in Yarl’s Wood had experienced rape, domestic violence, forced marriage, forced prostitution or female genital mutilation. Campaigners say that the opening of Derwentside IRC is the epitome of an inhumane Tory government who have lost their moral compass.

Former GP, Dr Helen Groom, of the No To Hassockfield Campaign, added:

“Women asylum seekers are amongst the most vulnerable people in our society and they deserve our attention and compassion.”

Campaigners have committed to continuing regular demonstrations and vigils at the site in support for the women locked up there. The next demonstration will be on Saturday January 15th from 12-2pm and every third Saturday of the following months. You can find out more below.

Whatever happened to the likely lads?