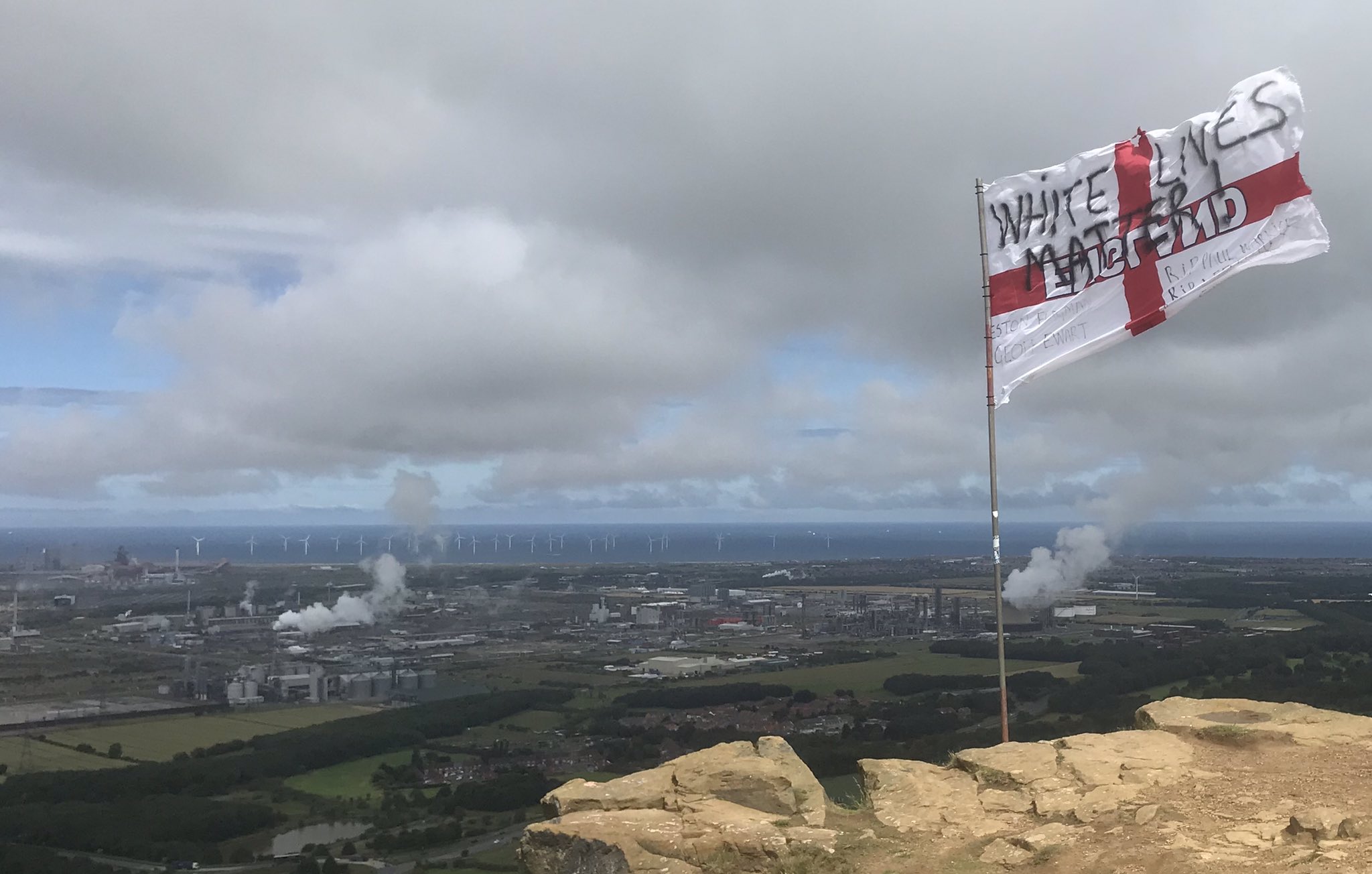 ‘Black Lives Matter’ is a response to racial inequality, ‘White Lives Matter’ is the name of an American neo-nazi group, and the phrase is unashamedly racist, and white supremacist. Photo by Tees Valley Monitor

An England flag flies on a hilltop above Redcar. It used to be just that. But recently it’s been embellished with the slogan, ‘White Lives Matter’. It’s been like that for about a month now and a few people seem in no hurry to see it gone. Tees Valley Monitor set out to discover why.

The flag’s not there officially. When a group of local people first put it up on Eston Nab in 2013, the council took it down. But the group just put it back up, and did so every time the council removed it, eventually even holding a demonstration, during which they publicised that it was there as a memorial to murdered soldier Lee Rigby and other veterans. According to a poll in The Gazette at the time, the flag enjoyed widespread public support. The council appeared to give up and left it there. The issue is not about the flag.

Fast forward to June 2020, and three things happen. First, Black Lives Matter protests and a furore over monuments, prompting counter demonstrations from groups intent on protecting said monuments. Second, the family of Lee Rigby releases a press statement, widely reported on 4 June, saying that they do not wish their son’s name to be used in connection with any of the anti-BLM protests. Then someone adds the slogan to the flag on Eston Nab. So, the flag now stands in direct defiance of the wishes of Lee Rigby’s family. The issue is not to do with remembrance.

Earlier this week Tees Valley Monitor contacted Councillor Mary Lanigan (Independent), leader of Redcar and Cleveland Council, to ask what plans the council had to remove the flag. When, after a few days, we had received no response, we contacted the leader of the Labour group on the council, Carl Quartermain. He responded by emailing all Redcar and Cleveland councillors, asking for steps to be taken to remove the offending symbol. In his reply to us he added the point that, in his opinion, defacing the national flag in any way was offensive, but noted that he believed that Cleveland Police are not treating it as a criminal offence.

Which, if true, is odd. The BBC recently reported a similar incident in Warwickshire where, during June, the same slogan was sprayed on a hillside. They reported that “Warwickshire Police said it was being treated as racially-aggravated criminal damage and said officers would be increasing patrols in the area.” Is it possible that the same slogan can be seen as ‘racially aggravated’ by one police force, and not by another? Tees Valley Monitor has now written to the chief constable of Cleveland Police as well as the Police and Crime Commissioner for clarification, and will update their Twitter thread when they receive a response.

Mary Lanigan’s response to the enquiry was, “We are aware of this [the presence of the slogan]and we are trying to ascertain who this land belongs to. It appears it is not the council, but we are doing further checks.” Which is also odd.

It’s odd because, in 2013, the council removed the flag at least four times on the grounds that the flag had been put up, without permission, on council land. So, the council owned the land in 2013, but now they don’t, and, in fact, they don’t actually know who it belongs to. And a month after the offending slogan was added to the flag, they haven’t managed to find out.

Now we know that council services have been severely disrupted by the coronavirus crisis, but compare Redcar’s response to that, earlier this week, of Bristol City Council. On the plinth formerly occupied by the statue of Edward Colston, a group installed a statue in support of the Black Lives Matter movement. Exactly twenty-four hours later the council removed it and released a statement saying that the artist who had made the new sculpture was to be billed for the cost of removal and storage.

You may not approve of Bristol City Council’s sentiment, but you have to admire their efficiency. Especially if you live in Redcar, where the wheels of government seem to move so much more slowly.

There is a need for someone at Redcar and Cleveland Council to show leadership and make it clear that racist messaging is unacceptable. There may also be a need for the legal team to complete simple tasks in under a month. And it needs to be done soon, before the whisper goes round that it runs scared of Redcar’s racists.