A personal reflection on a protest 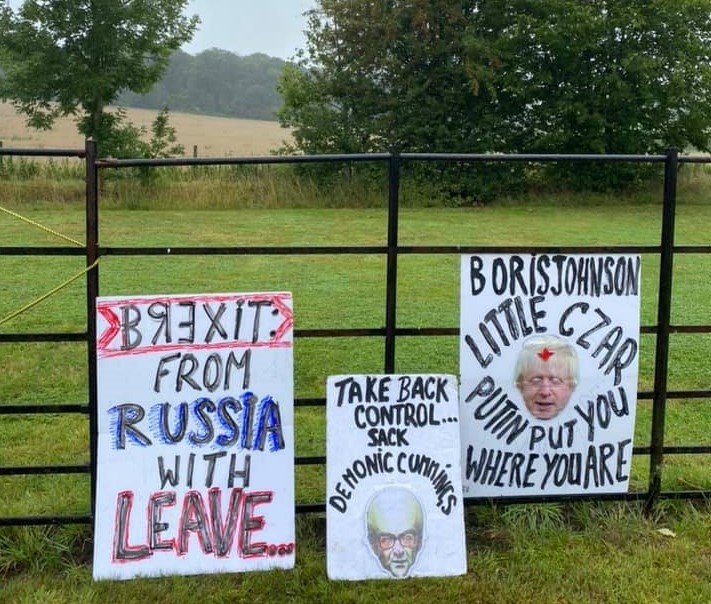 On Tuesday 18th August I joined a protest outside Chequers, the country residence of the Prime Minister of the UK.

The group was there primarily to draw attention to the Russia Report. So much for taking our sovereignty back!

In the words of Dominic Grieve QC, former attorney general for England and Wales and chair of the Intelligence and Security committee from 2015 to 2019:

“The Russia Report points to wilful negligence by the British government.”

I joined the protest to demonstrate that I have not given up, that I still care – about the fabric of our community, our well-loved institutions, and our democracy.

It was two days of contrast in many ways, not least the weather and police presence. The day, for the most part, was hot and sunny. We gathered at Buckmoorend Farm Shop, at high noon! We were greeted by a significant presence of good-humoured armed police. They explained that arms were de rigeur for that particular location and that we should not be alarmed. They did point out, however, that if we dared to wander from the pathway on to the estate we could be met with a lethal response! Undeterred by this, and the beady eyes of the surveillance cameras, most of us gave our details. One of our party was more rigorously interrogated about mental health and drugs. Difficult to reason why.

Niceties over, we embarked on a pleasant ramble along a public footpath through the rural idyll of the Chequers estate admiring the chocolate brown cows, avoiding their excrement, paying particular attention to the protected site and trespass signs. We must have appeared a motley crew carrying banners, EU, Russian and Soviet flags. Fellow passing ramblers were mostly wryly amused although a few condemned us as ‘socialists!’

We crossed the driveway and continued to a high, wooded vantage point from which we could fully admire the view and the stately home. The question on everyone’s lips was could Boris be within? Could he have returned from the Scottish Highlands for a happy family reunion with his father on his 80th birthday? Imagine the scene, Stanley dandling the latest grandchild on his lap… Who knows?

Following our return to the farm shop we lost Steven Bray, our erstwhile leader. Out of the time tunnel ‘Captain Novichok’ appeared! Could we have been infiltrated by the Russians, and Stalinists at that?

Unperturbed by this strange turn of events, we dutifully followed our new captain in single file to the gates of Chequers and the green sward designated for legitimate protests.

As we gathered, a helicopter flew overhead. The police were there standing by the gate, keeping a watchful eye.

We fastened our banners to the railings. A police officer politely told us what we could and couldn’t do and why they were there. It was all very light-hearted.

Then the party commenced.

As a rousing Russian march played through a speaker, our captain goose stepped in front of the gates: patrolling for the man in charge of the country, our closest friend – Vladimir Putin! A young police officer watched bemused, barely able to contain his smile. I did wonder was he thinking?  I don’t think he had witnessed the like of it before!

The sun shone and we danced to ‘Bella Ciao’, holding our banners high waving at the passing traffic. We were glared at, but the honks of support, outweighed the negativity and occasional derogatory gestures. One woman even drove into the driveway, leapt out of her car to enthusiastically thank us for what we were doing. At 4pm, after a heavy spell of rain as thunder rumbled, we dismantled our effects and returned to our starting point.

A few of us retired to a local pub and dined cheaply courtesy of Rishi Sunak. How wonderful to see photographs of our esteemed prime ministers spanning the years. They were strategically placed opposite the toilets, marked Lords and Ladies. A particular interest was paid to Mr. Cameron, Mrs May and, of course, Boris!

Although we were not there in our thousands, or even hundreds, a good time was had by all. We definitely made our presence felt as a video of the event went viral on Twitter!

He may be in Scotland but there will be no hiding place for our worst pm ever #SODEM #Resist @snb19692 @suehard pic.twitter.com/goWgQx9hcN

I was glad to be there. This is the nature of protest.

Something rotten at Northumberland County Council?