Red Ellen really is something for everyone, and is a pleasurable watch 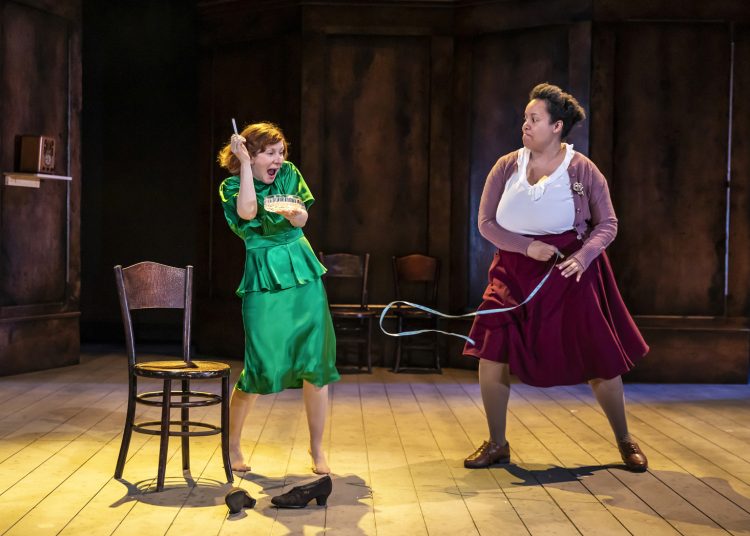 When going to see this production of ‘Red Ellen’, be prepared to be immersed in the romanticised life of a North East champion. Although her personal accounts and papers were lost after her death, the impact this woman had on the North East and the nation as a whole should not be forgotten. Mention the Jarrow Crusade and people remember the men marching, but mention Ellen Wilkinson, Red Ellen, as one of the main driving forces for it, and as so many other great women, people are likely to pull a face and answer with an ‘eh?’ This show puts Ellen where she should be, right in the centre of conflict, controversy and politics for the people of Britain and the North East.

Through the use of the clever and versatile set, which shouts rather than screams of the manic-paced brilliance of the ‘39 steps’, we are taken across Europe from the North East, to Franco Spain, wartime Germany and back, while stopping off in London for The Blitz. All the while, the talented cast multi-role spies, communists, politicians and the public to great effect, even if there are a few questionable Geordie accents bandied about.

The play seems to split into three genres and styles, which, running at almost three hours with interval, certainly has the time to do so. In the beginning it feels a bit like a sitcom with Ellen running frantically around in the middle of a hectic world, not quite succeeding, but failing brilliantly, like ‘Miranda’, but set in the 20s and 30s. Then it transforms into a genteel drama with surreal sections of panic, soundscaping and a large Ellen head. Finally, towards the end, we get the crescendo of the piece, with real hard-hitting drama, as Ellen’s world unravels, and we see the true extent of how far she will fight for it.

This play really is something for everyone, and is a pleasurable watch in the beginning, with a good punch towards the end, wrapped up nicely to celebrate a true heroine of the North East, and the people.

Bettrys Jones portrays the fire-brand ‘Red Ellen’ with great ferocity, controlling the action and space wherever she goes, while bringing a heartfelt realism to the character, that so many have heard of, but few really know. Kevin Lennon is a delight to watch as Herbert, the lacklustre politician, who appears to be a footnote to Ellen’s life, before transforming into an infuriating antagonist in a fight with Ellen, which really is the dramatic turning point of this show. Helen Katamba’s Annie is beautifully delivered as a steadfast support in Ellen’s life, who is always there to keep her grounded.

It is so easy to underestimate the difficulties of tackling the relevant issues of today in a biographical period piece. ‘Red Ellen’ manages this well, even though meandering a little at the beginning, it is still funny, hard-hitting, and has a real point to make. You should make time to see this show.