The camp and the march to it became legendry among peace activists within and beyond the Women’s Movement and its impact continues. 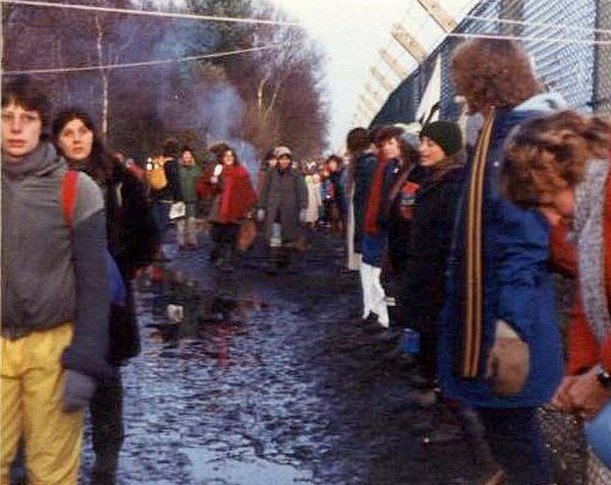 This year is the 40th anniversary of the Greenham Common Women’s Peace Camp at the American Military Base in protest against 96 new nuclear cruise missiles to be based there.

It was marked by an anniversary walk by women in late August with a weekend of festivities and memorials to women who attended the camp. This was organised by the ‘Scary Little Girls’ Production Hub and rightly highlighted the moving stories, courage and determination of the women involved.

There is a wide range of views among women on peace activism and not all of them support anti-war campaigns and any conjunction between feminism and anti-militarism. Marking and uncovering the peace activities of women involved in Greenham that extends back four generations to remarkable women’s peace crusades from the 1820s is of historical interest.  It is also an inspiration for women peace activists now, many of whom feel that 40 years on, the same battles are being fought. It is also timely.

To the concern of many peace and anti-war activists the British government has increased its nuclear arsenal by 40% and is lifting the cap on the number of Trident nuclear warheads Britain can stockpile. It has also announced a new multifaceted defence alliance (‘Aukus’) with Australia and the US. This will bring closer cooperation on military operations and weapons development in the Far East including a new fleet of nuclear-powered submarines.

The Greenham women campaigners called themselves ‘Women for Life on Earth’, so it is appropriate that Greenham is now a tranquil place of peace and beauty in which, in late summer ‘Ladies-Tresses’ orchids flower in abundance. A knowledge of the Peace Camp and the accounts of women activists involved are, however, all relevant, even crucial to anti-war activists such as those opposing these latest plans by the government as part of its ‘Global Britain’ profile.

The campaign began on 26 August 1981, when 32 women, 4 men and several children set out on a 120 mile walk from Cardiff in Wales to the base in Berkshire. On arrival at Greenham ten days later, they set up camp outside the wired perimeter overlooked by the huge watch tower (now a museum and café).

Their demand for a TV debate with the government on nuclear weapons, a meeting with the Base Commander, and Head of the Military Police, were ignored as ‘an eccentric distraction’ so they engaged in non-violent direct action that included spraying aircraft with paint, cutting the wire, and some women chaining themselves to the wire fence.

There was little media coverage of the march, the camp, or the increasing arrests, court appearances, fines and even imprisonments of women. In the face of this silence, chain letters were sent to women’s groups everywhere inviting them to Greenham on 12 December 1982 for an event ‘Embrace the Base and Close it’.

An overwhelming response at Greenham

Thousands of women travelled to the camp in response; they danced, sang, and formed a human chain around the wire fence to protest. Many women stayed and the camp became their home. They organised life in benders and tents with children and each other and learned skills and ideas on cooperative living and non-violent action.

Suddenly, Greenham was news!  The day after the event, it was blazoned across the front page of the Daily Mirror as ‘the world’s most powerful protest against nuclear war’. From then media coverage of the camp grew both in support and opposition, some of which condemned it using sexual and condescending slurs against the women.

The camp provided an icon for 1980s peace action and until it closed in 2000 and had a lasting impact on international anti-war campaigning and politics. It was also an inspiration for other Peace Camps across the world and women’s campaigns, such as the ‘Women Against Pit Closures’ during the Miners’ Strike of 1984.   Over the seven years of its existence, over 70,000 women visited the camp. The women became increasingly media-savvy providing vivid visual images from the camp such as those bringing together warheads and children’s clothes drying on the military fence surrounding them.

Very significantly, it introduced a new model of non-violent protest linking personal sexual politics to global power politics. This, and the decision, following early incidents of sexual violence, to make the camp women only, was and remains the subject of controversial debate inside and outside the Women’s Peace Movement.

Regardless of the controversies, Greenham, without doubt, galvanised the start of a twentieth century women’s peace movement that changed laws and lives.  Even, the Military Intelligence Services, despite dismissing them as a lunatic fringe of ‘Punks and Crazies’ who lacked seriousness, acknowledged the camp as a major focus of peace activity with the power to reverse public opinion on nuclear weapons.

The camp and the march to it became legendry among peace activists within and beyond the Women’s Movement and its impact continues.  Many of the protests numbers from the Camp’s songbook such as ‘Building Bridges between our Divisions,’ and ‘Which Side are you On’, are still popular at rallies; and films from the time such as ‘Carry Greenham Home’, ‘Greenham Granny’, and ‘In our Hands Greenham’, are among the different moving testaments to the Greenham Women’s achievements, the obstacles they faced and the importance of solidarity and friendship to the success of their campaigning.

Greenham, building on preceding women’s crusades, radicalised a generation of women and opened up for them the sense of the possibility of another world of non-violence for women and for humanity.  The time to begin the conversation on the power of their collective activism and to learn from it is now.