North East Bylines pays tribute to a wonderful writer and friend, Peter Lathan. He will be much missed. 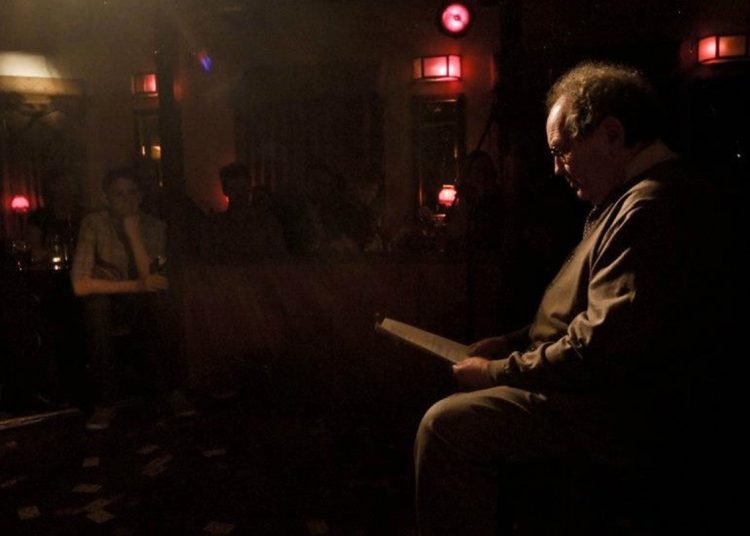 Peter Lathan giving the first performance of "Going Gently" at Pink Lane Poetry and Performance at the Jazz Cafe, Newcastle, in March 2012. Photo by picturesbybish.

The North East Bylines team was deeply sad to hear of the death last weekend of Peter Lathan, one of our writers. He will be very much missed.

I first met Peter nine years ago when I helped out backstage in the costume team for one of his community theatre projects in South Shields. This was a production entitled The Mysteries, based on the medieval mystery plays. It was a wonderful experience of meeting many new people who have become firm friends, in amongst the torrential rain over the few days of the outdoor performances at Arbeia Roman Fort!

Since then, Peter and I stayed in touch and then when North East Bylines was born, I asked him to write for us.

Love and thoughts from the North East Bylines team

Some of the North East Bylines team knew Peter personally and others knew him from his writing. Here are a few thoughts and messages from some of our writers.

“I worked with Peter a few years ago and, as an actor, I’ve also known him as an enthusiastic connoisseur of theatre and a thoroughly lovely human being. It is so sad that he’s gone. Peter helped give profile to many local theatre companies who would otherwise get little attention for their work. The British Theatre Guide was ahead of its time and it was Peter’s unstinting devotion to getting out and seeing shows that made it such an important part of the theatre scene here in the North East. We’ll all miss his cheerful face at first nights and his support and kindness.”

“Stephen and I from Northeast Theatre Guide have chatted with Peter at many a theatre press night. He warned our son many times never to start smoking, and gave us countless anecdotes about his involvement with theatre. Lovely man. We will miss him.”

And from James Barton:

“I first met and worked with Peter Lathan many years ago and have enjoyed working with him since when the opportunity arose but one of the things I will always remember fondly about Peter is whenever we ended up in the same place whether theatre, shop, or pub he would always come and have a chat with me, a little catch up to see how we were both doing, even when we hadn’t seen each other for a while, he always made time. Oh and obviously announce to the entire theatre that I had “been banned from every theatre in the north east” or “here’s trouble” when I was trying to buy a ticket, in his wonderful way.
I’ll treasure that too.”

Peter wrote an impressive total of 65 articles for North East Bylines which spanned a wide range of subject areas including theatre, politics, local history, ghost stories and even one fashion article! They have all been hugely enjoyed by many readers. I asked our writers to think about some of their favourites.

Louise Brown said that she would definitely go for his lockdown series as being her favourite.

“So sorry to hear of Peter’s death and my thoughts go out to his family, friends and loved ones. I thoroughly enjoyed his series on North East ghost stories. He will be missed by the Bylines team.”

“I am very sorry to hear this sad news, but thank you for letting us all know.  I never met Peter, though was delighted to find a fellow who felt as I do about the very bottom common denominator served as festive television fare on New Year’s Eve; but most of all I appreciated the honesty of his writing.  We are lucky to have his North East Bylines archive, to read again with much pleasure.”

And from Phil Coghill:

“I didn’t know Peter personally, but I have greatly enjoyed many of the articles that he has written for North East Bylines. My favourite article of his was also the first one I read, his three part Daytime TV series. I loved the dry humour he brought to the piece, but it also reminded me of some of my elderly relatives and their TV viewing habits.

“I would also like to highlight his writings on the theatre world. Even if you weren’t a theatre lover yourself, his clear love and knowledge of the medium was infectious and it deeply saddens me that we won’t be seeing any more of them.”

We will miss Peter and remember him with fondness.

And to conclude, with words from poet, Harry Gallagher: