The government has failed to put together a plan to rescue the social care sector, despite Boris Johnson’s claim in 2019 that he would fix the crisis in social care 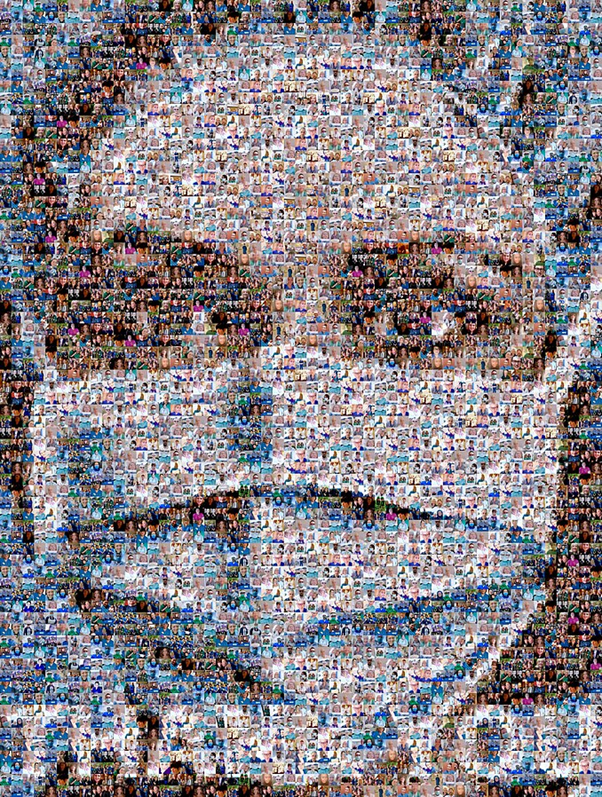 A digital collage created by portrait artist Nathan Wyburn of 200 NHS workers. The government’s gratitude to the NHS staff, though, has not lasted long. Photo from wikimedia commons

A cartoon portrays Rishi Sunak hiding behind a corner brandishing a massive “austerity” axe and trying to entice passers-by with a banknote on the pavement. Distracted by the banknote, representing Sunak’s temporary boost in Covid-19 spending, we may fail to notice the axe.

There is no doubt that the Covid-19 crisis has been exacerbated by eleven years of Conservative Party policies, which have left both NHS and social care under-resourced and under-staffed.

James Bullion, president of the Association of Directors of Adult Social Services (ADASS), has warned that the social care system risks a “catastrophic failure in some areas”.  This is why MPs on the Health and Social Care Committee have said that at an annual funding boost of at least £7bn is required.

Both the care sector and the NHS have many vacancies. An improvement, in both pay and in terms and conditions, are necessary for successful recruitment and retention. The inadequacies of the care sector have increased pressures on NHS hospitals and have made the Covid-19 pandemic worse.

The government has failed to put together a plan to rescue the social care sector, despite Boris Johnson’s claim in 2019 that he would fix the crisis in social care “with a clear plan we have prepared”. The NHS also needs extra funding to deal with the huge backlog of non-Covid health needs. Rishi Sunak made no mention of either social care or improved NHS funding in his budget statement.

NHS staff have been exhausted by Covid-19 and demoralised by a sequence of inadequate provision of personal protective equipment, staff deaths and by workload pressures exacerbated by delays in introducing lockdowns. NHS consultant Partha Kar, in an article for The British Medical Journal, has described how he had trusted our NHS leaders initially: now he has lost faith in them.

The NHS poor predicament could now be compounded by a significant exodus of nurses and doctors.

So, what was the point of offering a 1% pay increase to NHS staff, bearing in mind the  promise of a 2.1% pay increase made before the pandemic? Haven’t the events of the past 12 months strengthened the case to keep this promise? Even the Conservative-leaning The Times has come to the conclusion that the offer of a 1% NHS pay increase is inadequate in a crisis.

Office for National Statistics weekly earnings data show that average earnings across all sectors of the economy were 3% higher in 2019/20 than in 2011/12, but 2% lower for NHS staff.

The Institute for Fiscal Studies (IFS) Director Paul Johnson has pointed out that this budget has removed £4 billion per year from public spending, which is in addition to the  £12 bn a year cut announced in November. These cuts will fall disproportionately on justice and local government spending.

Cuts on local government spending have an adverse impact on social care, as local authorities are the source of funding.

These budget statements are shaped by the increasingly undeliverable Conservative pledge, at the last elections, not to increase the rates of income tax, national insurance and VAT.

None of us likes to pay more in taxes and we would all like the economy to boom, so that any increases in tax could be minimised. However, Boris Johnson’s mismanagement of the Covid-19 lockdowns has resulted in the greatest Gross Domestic Product (GDP) reduction amongst the seven leading economies (G7) in 2020. Furthermore, in the current year the Covid-21 damage to the economy has been compounded by Boris Johnson’s hard Brexit, which has resulted in reduced exports to the EU and has damaged our financial services sector.

An indirect consequence of Brexit appears to be the recently announced increase in defence spending: this is not justified by new threats but rather by a sense of increased isolation. However, the real threat we are facing is increasing failure of the NHS and social care sectors. The IFS Director’s conclusions on the budget are that Rishi Sunak’s spending plans are not deliverable, at least not without a significant impact on the public services.

Lord Adonis elected to be chair of European Movement UK