Rooting kindness in 2021: the year of the tree 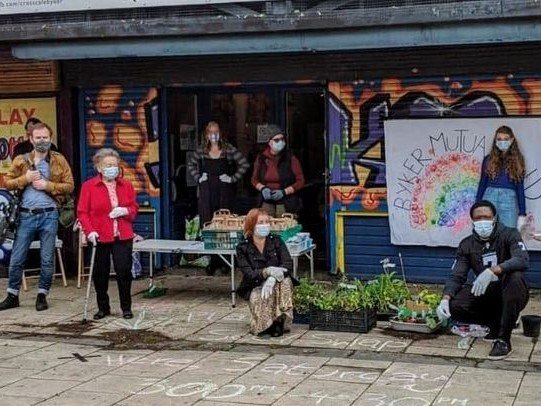 Some of the volunteers at Byker Mutual Aid Group, used with permission

I have a friend who declares she is apolitical. She is intelligent, well-read, always learning something, active in community groups and environmental campaigns. Decisions are made that she does not agree with, yet she still declares she is not political?

This outward projection of neutrality doesn’t make sense, or does it?  Neutrality serves only to uphold an extent system. I think my friend is unwittingly shining a light on an inner conflict that is blighting individuals and communities by stealth: non action.

Compassion is charged and positive action. Compassion is empathy in action.  It is kindness.  If, as Arthur Schopenhauer asserts “Compassion forms the basis of our morality’’ then consideration needs to be given to our communities and how we charge neutrality with positivity.

Over the last decade the Tory machine has churned out two narratives enabling disharmony to seed and division to germinate. The first narrative evolved from David Cameron’s Big Society, which morphed with alacrity at the start of the pandemic into two, simple, oh so clever, words: Key Worker.

Those two words made such a difference. I saw it in my son and the young people I work with.  Shoulders back, assertive: “I’m a Key Worker.” It fundamentally altered the way they felt about themselves and how they interacted with their work. It gave them a sense of connection. The term defined them as inherently good people who work hard to support their communities.

All jobs have value, and all people should be valued. Key workers have been instrumental in keeping the wheels of industry well-oiled and fuelling the home fires. This is despite the majority of roles being underpaid and undervalued, highly insecure with poor contracts and limited guarantees, predominantly non-unionised, and lacking in the necessary protective equipment while also being most at risk of infection. It is because of these key workers, in spite of everything I have mentioned, that food distribution continued, and refuse was cleared, and parcels delivered, and health services operated, and education was provided.

The second narrative to play out is that of the parasitic stranger, the alien. We have heard this story told so often in the insidious and serpentine language of those who wish to convince you of the evils of the refugee, the asylum seeker, the single mother. We are taught to doubt and not to trust. We are good people. We give to the poor; we do for others as we would wish for ourselves. But shall we give to them? Doubt interrupts action. Cognitive dissonance causes thoughts and feelings, logic and reason, to misalign.

These two narratives played out last year in extremis on both sides of The Atlantic with elected leaders propagating racism, misogyny and intolerance with no room for the vulnerable under their gendered umbrellas.

The news from Calais last autumn was particularly upsetting; vulnerable people in atrocious weather conditions, often with only the clothes they stood up in, denied sustenance.  Human beings, our fellow human beings, cold, wet and hungry.

On both sides of The Channel, charities Care4Calais and Kent Refugee Action Network recounted stories of limitations to food distribution and blocking of volunteers in some helping activities.  People in those host communities were at risk of harm too, of becoming less than whole; if prevented from giving care and helping actions are blocked, they are disabled from acting in their full humanity.

More to give than to withhold

Human potential yearns to be realised. The rapid creation and response of Mutual Aid and community groups to take care of vulnerable people in their communities evidenced that it is within us more to give than it is to withhold.  Hospitality and sharing is a common thread running throughout human history.  Breaking bread, sharing what we have is at the heart of our major religions and root traditions too. Giving food and shelter are the first steps in giving kindness to our neighbours and strangers alike; it makes us human and in giving we become whole.

The virus is dangerous. It is a threat to public health and is ruining lives. It is also exposing societal ills and fundamental inequalities. But here is a more virulent and dangerous contagion that no amount of hand washing or vaccination will rid: oppression.

Cuts to education, trade union education, training and skills, losing Erasmus – none of these are incidental or accidental. They are staged and they are deliberate.  The tools to think, to learn, to speak, to challenge have been blunted.

Education sharpens wits and minds to challenge the status quo, debunk myths and rewrite narratives.  We have the vaccine for this, we just need to bankroll the roll out.  Fully funded access to education for all people of all ages levels inequalities by enabling them to build skills and confidence, retrain for different careers, learn English, have options, ask questions, find answers and lead fulfilling lives with hope.   Education is kindness.

In this strange pandemic and lockdown world we could have taken inspiration from former Czech President Vaclav Havel to lead our own bloodless, compassionate Purple Revolution; driving a moral reconstitution of society through education to support people to live their best lives in full humanity, embedded firmly in the world and in their communities.

We all have a right to learn; for our own sakes and for each other.