Interference by Russia in our democracy must be stopped. If it isn’t, we really will become a vassal state and we will no longer rule Britannia. 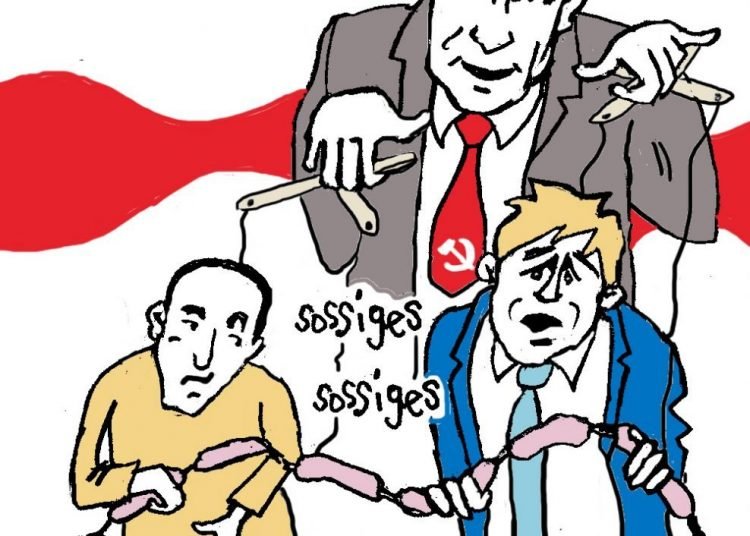 Bo & Do puppets of Putin by Suzy Varty

The long-awaited report by the House of Commons Intelligence and Security Committee into Russian interference has finally been published: and what is most important is what it leaves out.

It fails to say whether there has, or has not, been Russian interference in our democracy; it does say there probably has been, and it should be investigated.

Prime Minister Boris Johnson said there was “not a sausage” of evidence in the report to suggest Russian interference.  However, he fails to explain why he delayed its publication for 38 weeks. What is more likely to explain this delay, which ensured interference was allowed to continue past December 2019, are the things the report doesn’t mention:

On Wednesday 22 July, during Prime Minster’s questions, Leader of the Opposition Sir Keir Starmer tried to investigate. He asked why the Prime Minister had sat on the report for so long: “The government has taken its eye off the ball. Arguably it wasn’t even on the pitch.” Johnson did his usual wibble wobble and avoided answering, trying to distract his audience and dismiss his complicity: “The Right Honourable member’s questions are absolutely absurd.” He went on to add a jaw-dropping claim that “there is no country in the western world that is more vigilant” in tackling threats to its security. This claim probably has the whole world laughing, given that the UK officially does not bother to investigate Russian interference in its own democracy.

Next, Starmer tried to elicit something from Johnson with a different approach: “Eighteen months ago, the then Home Secretary said that we did not have all the powers yet to tackle the Russian threat.” and then asked, “Why have the Government delayed so long in introducing that legislation?”

Again, Johnson tried to deflect the issue and obfuscate: “this is about pressure from the Islingtonian remainers who have seized on this report to try to give the impression that Russian interference was somehow responsible for Brexit.” He wanted to make it about Brexit, but Russian interference is bigger than a single, corrupted referendum: it is at the heart of our democracy. This is exactly what Putin wants him to be saying, stoking the UK’s tribal divisions and avoiding any challenge of the Russian threat to our national security.

It’s shocking that the Prime Minister is acting like a ‘sausage lap dog’ for a foreign power. Particularly shocking given the Russian Ambassador’s final comment on leaving London a couple of years ago “We have crushed the British to the ground, they are on their knees and they will not rise for a very long time”.

Starmer went on pushing for a reply that made sense, asking this time about the disjointed response raised by the intelligence committee. Johnson just revealed himself as a floundering, one-trick puppy: superficially appealing, but ineffectual. Again portraying Starmer as attacking Brexit, he said “Everyone understands these criticisms are motivated by a desire to undermine the referendum to leave the EU, the result of which he cannot bring himself to accept.” Johnson also tried to hide behind a poorly pre-prepared joke on Starmer flip-flopping: “The leader of the opposition has more flip-flops than Bournemouth beach.”  But this fell flat, and was expertly countered by a very on-the-ball Starmer: “Pre-prepared gags on flip-flops. This is the former columnist who wrote two versions of every article ever published! In case the Prime Minister has not noticed, the Labour party is under new management. No Front Bencher of this party has appeared on Russia Today since I have been leading this party.”

Ben Bradshaw MP was next to ask the PM questions about the report and his accurate assessment of the issue was damning: “By blocking the publication of the Russia report before the election, on grounds that the Intelligence and Security Committee has said were spurious, and then trying to fix the Committee, is it not abundantly clear that this Prime Minister has knowingly and repeatedly put his own personal and party interests before the national security of our country?”

Johnson could only follow the Trumpesque line ‘there is no problem if we don’t look too closely for one’.

Johnson will make sure we never see any real investigation while he is Prime Minister, because that way we’ll never be able to find the truth about anything. And there are lots of truths to find, even just in this report: we need to get past the lies being spun by this government to see them.

Johnson is using every trigger he can to cover up the involvement of a foreign power in our democratic process. It’s the same old ‘dead cat’ routine, say something that will get everyone talking – or even better, arguing – and they will miss the real issue. He knows there are many in his audience who will be blinded by these nationalistic and divisive statements, even though they are irrelevant.

Brexit is not the issue; the past is done and Brexit has happened. It is the future that we must fight for, and the interference by Russia – or indeed any foreign power – in our democracy must be stopped. If it isn’t, we really will become a vassal state and we will no longer rule Britannia.