The end of June marks the deadline for EU citizens to lodge an application for settled status in the UK. 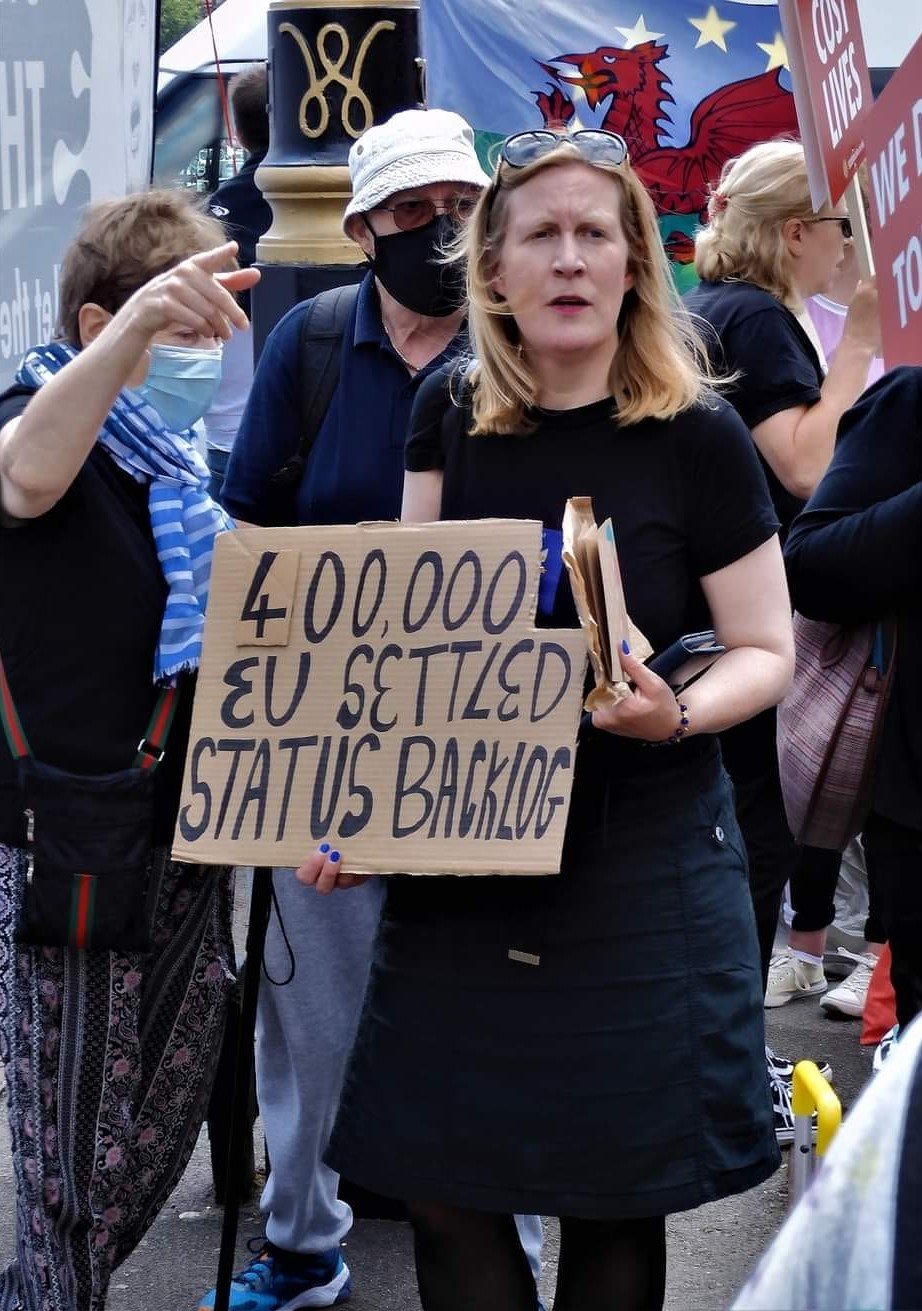 The deadline to apply is today, 30 June. Photo © Duncan Hodgkins

We are now five years on from the Brexit referendum, and a lot of things have changed for a lot of people, both from the UK and from the EU. Yet there are still many loose ends to be tied up! This includes settled status as well as cross-border service industries. I wanted to look at groups and individuals who have been working on the new arrangements and advocating for people who have been affected.

The end of June marks the deadline for EU citizens to lodge an application for settled status in the UK. The Office for National Statistics’ 2018 figure for EU citizens here was 3.66 million, yet recent reports suggest over 5.3 million applications for settled status have already been made. Unfortunately – perhaps partly because of the underestimate in numbers – there is now a backlog of around 400,000 in the processing of applications. This is likely to cause an anxious wait for many people at an already stressful time.

It has recently been reported that, because some applicants will be waiting months for their decision, they will receive a “certificate of application” that immigration minister Kevin Foster has said they can “rely on as proof to access their right to work or rent” or to access the NHS.  Foster has also said that “people will not lose their benefits next week”. Applicants can find help from campaign groups, and some political representatives such as these independent town councillors in Hexham, Northumberland.

Loss of voting rights even with settled status

On the subject of local councils, EU citizens here voted for, and were elected as, candidates in local elections this May. But that may have been the last time. The government plans to remove this right for EU citizens who have moved to the UK since the end of 2020, unless their country’s government enters into a reciprocal arrangement with ours. So far this covers Spain, Portugal, Poland and Luzembourg [sic].

Under the proposals, EU citizens who were living in Scotland and Wales prior to the end of 2020 will retain their existing voting rights since “all legally resident foreign nationals can register to vote for local and devolved elections”. The proposals are less generous for the same group of citizens in England and Northern Ireland, who will keep their local voting and candidacy rights “provided they retain lawful immigration status”.

Simultaneously, on the other side of the Channel, a significant proportion of the 1.3 million UK nationals living in Europe risk missing the same deadline to retain their residency. Fourteen countries opted to confer a new residence status on legally resident Britons automatically so they would not risk losing rights if they missed an administrative deadline. The other thirteen chose a system under which Brits must formally apply for a new residence status. Five of those thirteen chose 30 June 2021 as the deadline.

Among those countries, the deadline has now been extended to September in the Netherlands, and until the end of December in Luxembourg. It was rumoured (and reported by some news outlets) that the deadline would also be extended in France, where it is estimated that 25,000 British citizens have yet to apply. They risk losing access to healthcare, pensions, property rentals, jobs and mortgages if they fail to do so. Yet currently, despite campaigns for extensions, it appears that France, Latvia and Malta will still apply the 30 June deadline.

Meanwhile, UK businesses trading with the EU and EEA also faced changes when the Brexit transition period ended on 31 December 2020. The queues of lorries exporting goods and the shortages of willing drivers around the New Year were well publicised. However, there were also changes affecting service businesses, although services are scarcely mentioned in the Trade and Cooperation Agreement which the UK government hastily published on Christmas Eve.

The sectors hit particularly hard by new restrictions – and uncertainty they have caused – include those that rely on the physical movement of people across borders. Musicians have made their voices heard, and North East Bylines has reported on the plight of seasonal workers: ‘the Forgotten 25,000’. Other professions affected include journalists, IT contractors, authors and interpreters.

The Cross-Border Services group grew out of the wish to protect the interests of such service businesses, both UK and EU-based; its tagline is, ‘We work to reduce barriers to professional mobility across Europe’. The group’s website explains that

“British citizens living in mainland Europe are particularly hard-hit by the prohibitions on delivering their existing services across European borders, […]  and on developing their businesses by tapping new European markets. Some British employees of companies based in the EU and EFTA could even be disadvantaged compared with all other third-country nationals.”

Indeed, some situations post-transition are very complex, and one of the group’s contributions has been to submit some of these in evidence to a House of Lords inquiry. A question remains as to whether or not the group will be able to secure any improvements to the conditions under which service businesses can operate.

Some campaigns run by British nationals in the EU certainly are making changes for the better. Take Harry Shindler’s long-running work to have UK citizens abroad keep their right to vote in the UK for longer than 15 years. He swore to see the rule changed before he turned 100, and a change was finally announced in this year’s budget. Harry recently received an OBE in the Queen’s birthday honours list: I hope he has a great 100th birthday next month!

The change, however, doesn’t necessarily mean campaigners now feel completely relaxed about the future. Sue Wilson, Chair of the Bremain in Spain group which campaigns to protect the rights of UK citizens there, was quoted as saying, “Though many won’t actually believe the government will follow through this time until they have a ballot paper in their hands, I do believe we are finally on our way.”

Sue commented in the same article, “It’s just a terrible shame that the bill that aims to restore voting rights to Brits abroad also aims to disenfranchise others in the UK. Much as I want my voting rights guaranteed for life, I would prefer it was not at someone else’s expense.” This refers to the UK government announcing that it aims to tackle electoral fraud’ by requiring voters to show photo ID in future elections.

I’m very glad there are so many individuals and groups working to support people with ties to both Europe and the UK. Another recipient of an MBE in 2021 was Anne Ford, for services to English in the European Union. The European Commission interpreter states in a video message that she hopes the honour she’s received boosts morale among her colleagues after a difficult year, as they continue to build bridges between languages and cultures. It’s a sentiment I can echo as I think of everyone who helps to build and maintain these bridges, wherever they live and work.

Kim Sanderson is a member of the Core Team at the Cross Border Services group.

Kim was recently interviewed for a Bylines podcast. You can listen here.