Simply Sheepish was an idea amongst many until Covid-19 struck 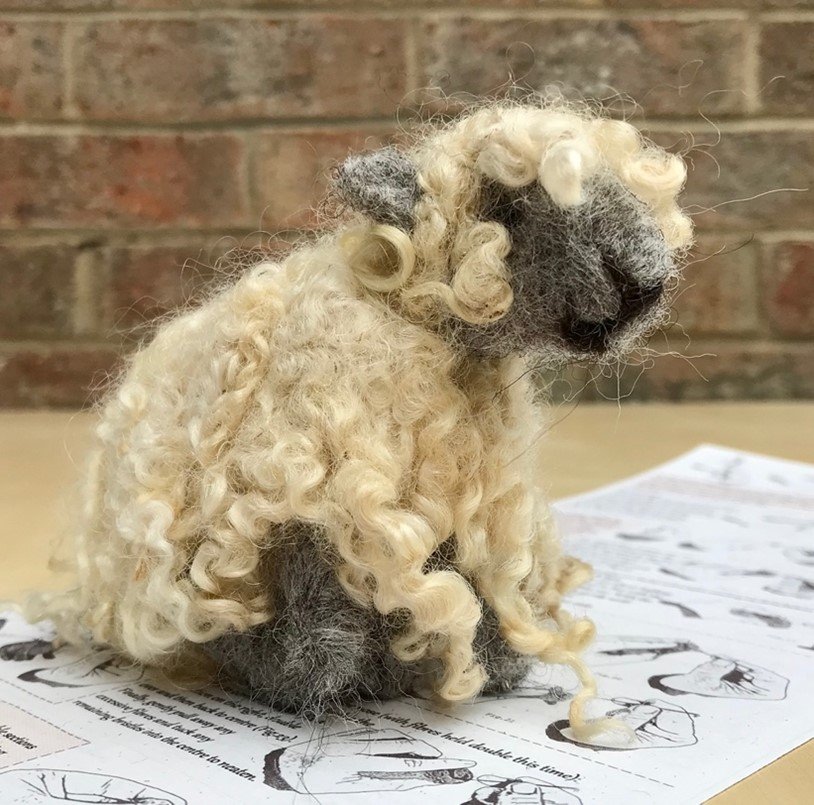 Photo by author, used with permission

Simply Sheepish was an idea amongst many until Covid-19 struck. Up until then I had been working in the hospitality sector after getting married and moving to Newcastle in May 2019. I had always wanted to start my own business and when furloughed in March 2020, I finally had the time and space to create a brand and product.

I got to work designing and making needle-felted sheep. I got my husband Matthew to take hundreds of pictures of my hands and spent hours manipulating the images so they were simple and stylised for our kits. I wrote up instructions and edited the photos and words together with the plan to package up some wool, tools, and a printed pamphlet and try my luck with a page on the craft sales platform Etsy.

This sounds simple enough but Simply Sheepish was the end result of competing concepts Matthew and I had chewed over and refined. Originally, we’d talked about ‘text and pictures’ as being my forte, with an arts background and an English degree, plus much editing experience in my previous role as an administrator (posters, newsletters, publicity). We thought about a project called ‘The Kitchen Table’ as I liked baking. Then around September 2019 we settled on ‘Vicarage HQ’ due to us living in a vicarage (Matthew is a parish priest) and that’s where much of my creative work was done.

We ‘launched’ at the parish Christmas fair with stacks of cards, slices of chocolate brownie, and a few needle-felted sheep that were a last-minute addition – Matthew’s mum had seen one in a photo that I’d made ages ago and thought they might sell. The sheep were a great success! Vicarage HQ needed a rebrand and after several months of coffees and conversation we settled on ‘Simply Sheepish’!

Crucially we came up with the concept of ‘sheep made out of sheep’. I’d been going to craft shows for years and always picked up a random needle-felting kit but I’d never come across a kit that made a virtue out of the type of sheep being crafted from its very own wool. I knew very little about sheep despite my grandma having a farm full of them! The pandemic struck and I set to work researching sheep breeds, the qualities of their wool, and which would work together well in a collection.

My research, designing, making, and working-from-home lifestyle took off and I decided not to go back to my café job. Sourcing materials was the biggest step in terms of commitment to the business. I’d designed ten kits and had ordered small quantities of each breed’s wool as I needed it. I was more than a little nervous when I placed the order for the 1kg bags.

I was really pleased that the project so far had championed natural materials and this was something that felt particularly important both in terms of brand image and environmental impact. I’d developed a strangely in-depth knowledge of paper while formerly working as an administrator, so I was very pleased with the beautiful cream, heavy weight parchment-like paper I found to print the instructions on; it was also 100% recycled, recyclable, and made in the UK! The boxes were much trickier: Eventually I settled on some simple recycled flat-pack pizza style boxes that contained all the kit components quite snuggly. I also sourced some gift boxes and some cotton/linen ribbon for a gift option which had a similarly crafty look.

Despite being a creative person, taking photographs has never been my favourite hobby. Therefore, the most difficult part of getting up and running was photographing the products for our website and Etsy. Light was a big problem and taking pictures inside just didn’t work; I didn’t know about light boxes at the time so outside was the only option. The vicarage where we live is seemingly located in the windiest place in the North East and so checking the weather forecast for wind speed as well as rain was essential! As our self-imposed September deadline approached, I was getting desperate… Luckily, a balmy afternoon at the end of August saved me and I was able to get the job done.

On 16 September 2020 we opened our Etsy shop! A few orders trickled in and we got some lovely feedback and some loyal first customers. We held a social media campaign, 100 Sheeps ‘til Christmas, and posted a countdown post every 10 days on Instagram and Facebook.

Around about the time the kits were launched we’d had the idea of selling cards too; ‘Heartfelt’ was the name and concept we came up with while out walking one of our lockdown routes. I designed six simple cards to start us off: hearts and sheep in various shades of Shetland wool. I also experimented with some Christmas card designs: a tree, a baby penguin, stockings, and a star. Despite each card being far more labour intensive than a kit to create, we decided to keep the price low. Matthew was convinced they’d be a ‘loss-leader’; I honestly didn’t think they’d sell…

Orders picked up as we neared the end of October. We’d had good kit sales – Christmas presents for family and friends – and were ticking along quite nicely, much better than expected in fact! Christmas cards were selling well too; I was quite shocked when someone ordered eight baby penguin cards. I hadn’t pre-prepared any cards as I could make them in about 15-20mins so I thought I’d just make them on demand: This was a big mistake! The baby penguin card orders kept coming.

The way the Etsy algorithm works is that the more sales an item gets, the higher it appears on searches. At first, customers wouldn’t have seen our cards unless they trawled through pages, and pages. However, as sales of the baby penguin card increased it began to creep higher, and higher up the listings. The baby penguin card became a bestseller, appearing as a top listing!

At that point, I was making baby penguin cards all day every day (and almost in my sleep) as well as packing kits, contacting customers, and trooping to the post office each morning (wearing my mask) with two bags for life worth of parcels. Part way through December, I was feeling exhausted, had a backlog of card orders (accompanied by an elaborate and slightly stressful system of post-its and dozens of orders pending on the app) and was worried that cards wouldn’t make it to customers in time for Christmas. We made the difficult decision to pull the card listings a little earlier than we wanted to and breathed a sigh of relief.

After removing the cards from Etsy, I was still getting messages from customers about baby penguins! The post was understandably a little slower than usual and it was difficult to forget about an order even after surrendering it to the Royal Mail. There was one baby penguin that is particularly memorable as it was headed for Australia. I’d had a few US and European orders but this was the first for Oceania. I’d sent it off three days before the deadline for Christmas post to Australia. A few days before Christmas I got a message from the buyer saying the card hadn’t arrived. I apologised, said it had been posted in time, and offered a refund if it didn’t turn up. We were up late on Christmas Eve as Matthew had a socially distanced midnight mass service in church. When we returned, I noticed I had a message on my Etsy app: it was the Australian customer saying thank you and happy holidays and that the card had arrived just in time!

All the hard work over Christmas was worth it as we established a good reputation via positive reviews and good order stats on our selling page. After Christmas I added three new cards to our collection and I’m now in the process of researching and designing five more sheep breeds! I’ve also been beginning to develop some knitting kits and continue to use natural materials.

I’d also been doing an online tutoring course and now teach English part-time. It’s been quite a year, and we’re more than aware of our privilege, but reinventing ourselves from home has been exciting opportunity and we’re looking forward to seeing what comes next.

You can find out more on our website www.simplysheepish.co.uk or find us on Instagram and Facebook @simplysheepish; search ‘SimplySheepishCrafts’ on Etsy to see our full selection of kits and cards!