All I can say is that I was totally blown away by the enthusiasm, energy and vitality of the people involved. 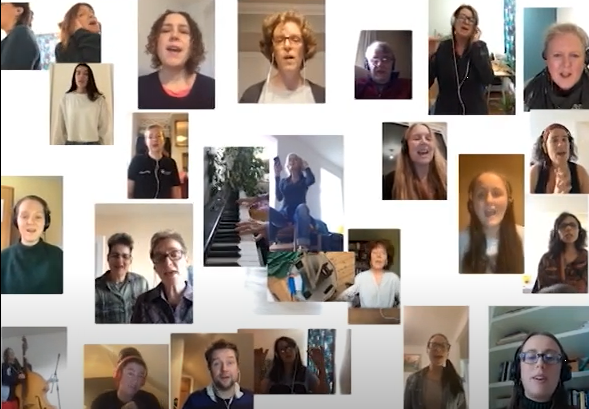 A friend invited me to a zoom meeting the other day. Nothing unusual in that, of course; it has become the new norm. However, this was a zoom meeting with a difference. I’m not sure what comes into your mind when you think of a university department, a sociology department in a university, but I would be surprised if you imagined anything quite like this event.

Sociology Sings Back is a project carried out at Durham University in which the sociology department invited a singer/songwriter to work with them on using music to convey research to new audiences. Professor Catherine Donovan, Head of Department explained that this was a new venture, one that they were trying out for the very first time. they had commissioned Nicky Rushton (interestingly out of 25 applicants) to work with students in the department to develop four protest songs to help convey some of the amazing research done in the university.

I experienced these songs and met some of the people involved on a meeting which was part of the sociology department’s annual celebration of the work that they do. The event was described as

“The strong repetitive messages of protest songs can become emblematic of a social cause. Experience our showcase of original protest songs promoting social justice and making a difference in the real world.”

All I can say is that I was totally blown away by the enthusiasm, energy and vitality of the people involved. The songs were truly inspiring and there was a real warmth and compassion throughout.

Nicky explained that she when she applied she wasn’t completely sure what was expected but she found protest songs irresistible having grown up in the Thatcher era. She said that we need a good villain. We had one then and we still do! She was initially concerned that she wouldn’t understand some of the terminology used in the social sciences but that was quickly blown away as everyone was so lovely.

The words for the songs had to come from the department. This involved lots of talking and sharing. A great example was that someone said “Abolish Eton” and this turned into a song! Well worth a listen. Another song ‘Smash the Patriarchy; came from a discussion around memes. The lyrics include “girl be pink, boy be blue”. There is also a very moving song on the topic of loneliness. This came from people saying “It’s not that I’m lonely – it’s just…”

Initially Nicky was asked to come up with four songs. However, during the process she started talking with some of the support staff about how they felt and how they fitted in. As a result, a wonderful song emerged. “We’re the backbone, we keep rowing”.

It was a real joy and privilege to be part of that zoom meeting and to experience something so very beautiful, moving and relevant. One of those things that sometimes just happens. But the project didn’t ‘just happen’. It was the result of a lot of planning and hard work from some very committed professionals and students. Impressive!

And finally, and you can still join the choir – the department made a virtual choir for a song that came out of looking at violence and abuse. The song is called ‘Active Bystander’ and it is sung by a number of people all singing separately with a backing track and then merged together. It is a powerful song with a repeated refrain. “If you see something then say something”.

Words that will stay with me.