It is October 6, 2018, Mimmo Lucano is under house arrest. Thousands gather to demonstrate outside his home. 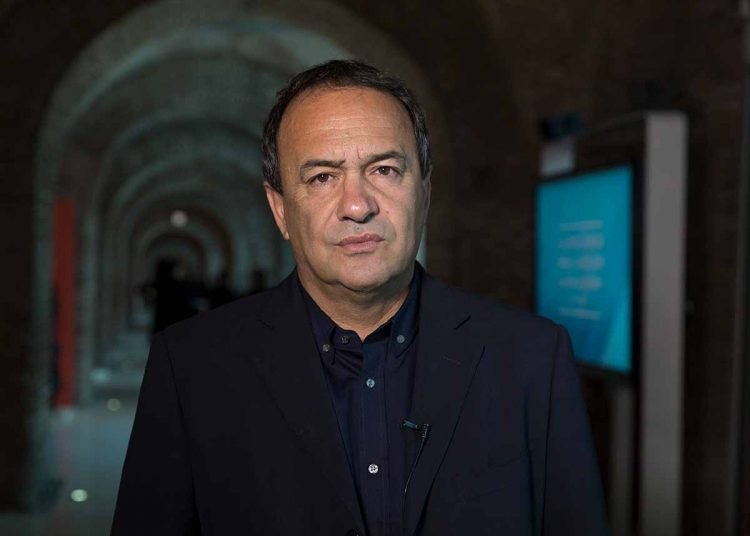 A spreading wave of international outrage has been generated by the stunningly severe sentences meted out on 30 September by a court in Southern Italy to Domenico Lucano, the internationally celebrated creator of a novel model of migrant and asylum welcome in his native town, Riace, and to seventeen of his co-workers. Giovanna Procacci, a professor of sociology at Milan University, took on a new role as citizen journalist and travelled over a two-year period to Calabria to follow and regularly document the conduct of what she compellingly describes as a political trial, part of a set of developments which are raising troubling concerns about the rule of law, Europe and the stability of Italian and European democracy.

My story here is about Riace, a small town at the southern tip of Calabria, and about a man, Domenico Lucano, who was for 15 years its mayor and made it his life’s commitment. It is also the story of the contradictions and vacillations of migration policies at the gates of Europe. In addition, for the last two years, it has been the story of a political trial in Italy, recently concluded with a shocking set of first-instance verdicts and sentences, with over 13 years jail for Lucano and a total of more than 80 years for the defendants overall, together with enormous legal costs and reimbursement orders.

The trial itself has in some respects been not dissimilar to prosecutions in France of Cédric Herrou or Pierre Alain Mannoni, nor from various other moves to prosecute humanitarian activists engaged in refugee and migrant rescue in the Mediterranean or at Europe’s land borders. We are currently witnessing a European trend towards the use of judicial methods to suppress and vilify humanitarian migrant rescue interventions, through what amounts to a new wave of political trials. We all know that political trials represent a danger to our democracy, and therefore I believe it is important to expose any tendency in this direction to public scrutiny and debate. In this respect, we can also say that, ultimately, this is a story which illustrates the current fragility of our democracies in the face of the challenge of migration.

The Riace experiment in refugee welcome

To better understand the issues raised by the recent trial at the town of Locri in the Italian region of Calabria of Mimmo Lucano and his collaborators in the migrant welcome project at Riace, it might be useful to recall the main features of this so-called ‘Riace model’. Riace is a small town in Locride, an area of Calabria at the tip of southern Italy on the shores of the Ionian sea, the ancient cradle of Magna Graecia, today unfortunately notorious for the local tyranny of the Calabrian mafia, the terrible ‘ndrangheta. The old towns of the region are perched on the hills above the coast, and very often have a more recent section built below on the coastal belt. Riace too is divided between the ancient village, 7 km from the sea, and the modern Riace Marina, on the coast. In all, it numbers about 1900 people, a village community that has been depopulated by decades of emigration to South and North America, Australia and Northern Italy, leaving behind empty houses and a ghost town.

When refugees from various places began to land on these shores in the late 1990s, the striking local juxtaposition of houses emptied by emigration and migrants needing homes to live in was noticed by many. Emigrated former residents of the village were contacted, and gave consent to let their abandoned houses; this then became the basis for a special kind of migrant welcome, initiated by the local community, naturally dispersed in ordinary homes rather than large dedicated institutions, and offering unexpected opportunities to revive and redevelop the villages of the region. The town of Badolato began such a project in 1997, but this lasted for only a few years. From 1998 onwards, it was continued via the Riace experiment, and, thanks to the commitment of Domenico Lucano, who became mayor in 2004, sustained for over twenty years, until the end of 2018 when it was forcibly ended by political and judicial intervention, culminating in Lucano’s arrest.

Houses and the village has been progressively restored, landfills reclaimed, entire areas returned to organic farming, selective waste recycling organised, water supply returned to public provision. Some houses were allocated to a form of “solidarity tourism” that provided further jobs and attracted over the years hundreds of tourists wishing to share the special atmosphere of the so-called “global village”, the heart of this social experiment. On walls all over the village, beautiful murals have been painted representing people and scenes from local tradition and newcomers’ worlds. In short, Riace was revitalized and for almost two decades native citizens and refugees lived there together in a harmonious community.

Meanwhile, Riace’s fame grew. On a national level, it became a pilot experiment that from the start of the millennium inspired the first official programmes for asylum and migrant welcome. It also inspired the 2009 Calabria regional law on welcome and local development. Lucano was invited to speak to expert groups and special conferences. On the international level, books, documentaries, films, awards and prizes for Mayor Lucano made Riace widely known and attracted a growing flow of visitors. During the period of massive arrivals of refugees in Italy (2014-2016), the little town repeatedly received very high numbers of refugees, sent by public institutions to the Riace branches of CAS and SPRAR, the two national migrant reception systems in Italy. Officials knew that Riace would never refuse any new arrival – hence the nickname that the Reggio Calabria Prefecture gave to Riace’s mayor: “Saint Lucano”. People began to talk about “the Riace model” of migrant welcome, and several projects were started in surrounding areas based on its main features.

A storm breaks over the town

Then suddenly, at the end of 2016, a series of official inspections were launched into the welcome services in Riace which resulted in mixed findings, some very critical, others full of praise. Then an exhaustive criminal investigation was initiated by the financial police force, which spared no technical and administrative efforts to turn Riace inside out. On 2 October 2018, Lucano was arrested for aiding and abetting illegal immigration. Several thousand people gathered in the little town to protest against his arrest. Two weeks later, his house arrest was transformed into a court order of exile from his native town.

From that point on, a violent storm broke over the small Calabrian village. A flurry of security measures began, including eleven months of exile for Lucano, successive decisions in different Courts, industrial-scale de-legitimization through media smears, and hostile and destructive actions by institutions. Welcome services were closed down, refugees relocated, the town returned to its old silence. On June 11 2019 , in nearby Locri, a criminal trial was launched on a series of very serious criminal charges, ranging from criminal association to aiding illegal immigration, fraud, embezzlement, false ideology, abuse of office, extortion and other crimes. This trial that has only just reached its conclusion.

This story has now been told by Domenico Lucano himself, in his compelling memoir Il Fuorilegge [The Outlaw], published by Feltrinelli in 2020 and now translated in Germany and France. Here he  tells his own story and the story of Riace, of the synergies of people bringing together lessons from different experiences and working with Lucano to design innovative solutions, the story of the enthusiasm of acting to create a future for his hometown, guided by his own values of humanity, solidarity and peace. He also tells the sense of bitterness at the destruction of all that had been created, as well as his own unyielding conviction that what had been done in Riace was worth doing. In Lucano’s account, the trial itself is only fleetingly evoked, in the background of the story; it is not easy to talk about an ongoing court case in which one is oneself the main defendant.

This trial will, however, be my focus of concern in the following instalments of this report. From the outset, I had the impression that Riace had been subjected to a spectacularly excessive judicial assault, and that the criminal trial unfolding in Locri was the culmination of a grossly  disproportionate official intervention. To set these things in their real context, one need only consider that this was happening in the heart of Locride, an area of Calabria infested by the ‘ndrangheta gangs. This was the setting where for more than two years Lucano and 26 others were put on trial for serious criminal charges because of the model of asylum and migrant welcome they had set up in Riace.

What this exaggeration and excess tells us is that this is not just a story about Calabria. The trial, the gravity of the criminal charges, the intensive criminal  investigation lasting more than a year, including  personal and environmental wiretapping, even video-wiretapping; the exaggerated security measures;  the indictment on criminal allegations including a whole set of charges which had already been dismissed by the examining magistrate who found most allegations unsupported by reliable evidence, excepting only two items (an arranged marriage which never took place, and the unauthorised hiring of waste collectors); and finally, a shocking first-instance sentence of over 13 years of jail for Lucano. All this is too much to have been the result of purely  local initiative. The trial of Lucano and Riace is a national story. But more than that, as I began by saying, it closely resembles prosecutions of pro-migrant humanitarian activism conducted in other European countries; in this respect, it is also a European story.