Before the sentencing, Lee said: “I am ready to face the penalty and sentences." 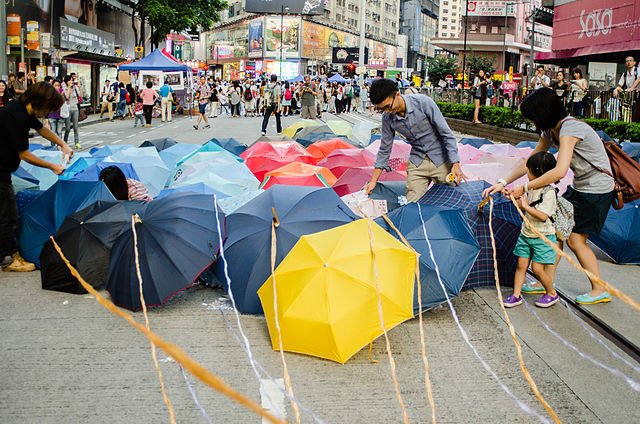 We are in very dangerous times, not just because there’s a deadly virus on the loose, but also because the pandemic continues to offer a convenient cover for illiberal governments, dictators and oppressive regimes who wish to shut down opposition and silence all forms of protest and dissent. If democracy was in crisis before the age of Covid-19 then it is ten times worse now. According to a report by Freedom House, China in particular could prove to be ‘a dystopian model for the future’. There is real concern over the treatment of protestors in Hong Kong.

The umbrella movement in Hong Kong

All around the world emergency powers are being invoked and no-where is this more apparent than in Hong Kong where a puppet administration is taking orders from a hard-line regime in Beijing intent on silencing democracy protesters. Many of those who took to the streets in 2014 as part of the so-called Umbrella Movement, a largely student-led campaign initially galvanised to push for fair and transparent elections, have continued ever since with other sections of society periodically calling attention to the creeping hand of authoritarianism.

Throughout history trade union activists have been amongst those most vociferously attacked by successive governments, from the Tolpuddle Martyrs who were transported for daring to organise fellow farm workers in Dorset to German trade unionists who were beaten, tortured, disappeared and killed by Hitler’s thugs. In Hong Kong many trade unionists are now in jail serving multiple terms or awaiting trial for daring to speak out against the increasing loss of freedom and human rights in what was once part of the British Empire, although it must be remembered that our imperial history is not covered with glory either.

The most prominent Hong Kong trade unionist to be jailed so far is Lee Cheuk-Yan, General Secretary of the Hong Kong Federation of Trade Unions who was sentenced to 18 months in prison in April for organising and participating in pro-democracy events in August 2019. Four other democracy defenders also received prison sentences and five more were handed suspended sentences.

Before the sentencing, Lee said: “I am ready to face the penalty and sentences. I am proud I can walk with the people of Hong Kong on the road to democracy. I want to dedicate the song ‘You’ll Never Walk Alone’ to the Hong Kong people. We will walk together even in darkness with hope in our heart.” Amnesty International in its latest campaign briefing describes the jailing of these opposition leaders a “violation of international law”.

Lee’s continued spirit of resistance is extremely irksome for the Chinese authorities as he inspires others in the pro-democracy movement to maintain opposition even as the government cracks down on public demonstrations. Lee was one of the key figures in the annual Hong Kong commemoration of the Tiananmen Square massacre which remembers the lone man who bravely stood firm against a line of government tanks in Beijing on 4 June in 1989 and all the other victims of government brutality around that time. Since the pandemic, the Hong Kong authorities have ruled that such public events cannot happen but Lee and others advocated other ways for people to mark the occasion by putting candles in windows and on roadsides, saying, “A regime can ban an assembly but it can never ban the indelible grievances in people’s hearts.”

The international trade union movement has demonstrated a solidarity that is sorely lacking here in the UK where many on the left retain a soft spot for the Chinese Communist Party (CCP), failing to recognise it is an engine for unbridled state capitalism with zero concern for upholding human rights.

Sharan Burrow, General Secretary of the International Trade Union Congress, has said, “Lee Cheuk Yan and the others jailed are political prisoners of China’s puppet regime in Hong Kong, which is crushing fundamental freedoms to satisfy its Beijing paymasters. The international trade union movement will continue to stand by the democracy movement in Hong Kong.”

In the UK the strongest movement against the abuse of state power wielded by the CCP and in support of trade unions is the Labour Solidarity Campaign for Hong Kong which last week joined forces with other organisations and campaigning groups such as the World Uyghur Congress and the Tibetan Community in the UK to draw attention to the many human rights abuses being perpetrated on a mass scale by the Chinese regime against various minorities as well as against pro-democracy activists in Hong Kong. The coalition of eight groups organised a commemoration and vigil outside the Chinese Embassy in London on 4 June. They released a powerful statement which not only condemned the Chinese authorities but also made demands on the UK government who have been dragging their feet on the issue of China.

12 June sees a global campaign for Hong Kong with events taking place in more than 40 cities in 17 different countries. But whilst some UK politicians may be beginning to speak out along with the promotion of a narrow resettlement campaign for Hong Kong nationals (BNO) who can tick the bureaucratic boxes and bring enough money with them to start a new life, many others stay silent fearing loss of investments, especially post-Brexit, post-pandemic. Trade at any price may yet be the price for Boris Johnson’s ‘global Britain’.