Squid Game focuses on highlighting the wealth gap in South Korea, with money meaning nothing to the richest whilst the poor fight to survive. 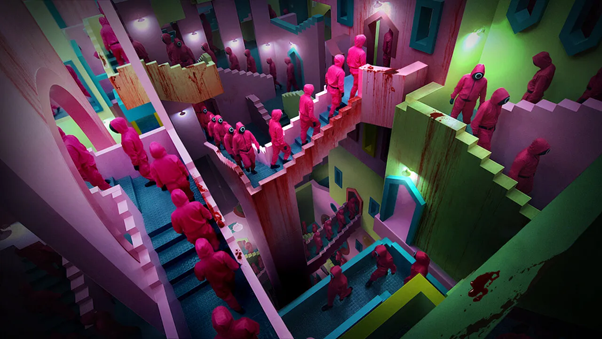 Squid Game is on Netflix (screenshot)

Squid Game is currently the most popular TV series on Netflix, garnering worldwide attention for its nail-biting moments and disturbing look at society. Squid Game is based in South Korea and tells the story of a group of people who are heavily in debt and are offered the chance to change their lives. A mysterious man shows up and gives them the opportunity to join a game in exchange for a cash prize. However, none of them were expecting to be the contestants in a series of children’s games where the losers are brutally exterminated.

Squid Game focuses on highlighting the wealth gap in South Korea, with the richest among them having so much money that life means nothing to them. Meanwhile, the poorest are literally fighting for survival.

These particular themes are also covered in South Korean movies like Parasite, Train to Busan and Snowpiercer. These issues are prominent in most parts of the world, but clearly a huge issue in South Korea. Squid Game chooses to investigate these power dynamics through the richest hosting a deadly tournament for their amusement, watching the poorest fighting for an amount of money that could change their lives.

Realistically, all of the rich hosts could change all of the contestant’s lives without so much as denting their bank accounts. Yet the richest find their lives so boring, that they don’t value anyone’s lives at all and would rather use their money to watch the poorest die for their entertainment. The show takes a horrifying look at society and how money can influence people on both ends of the spectrum.

The show’s writing is extraordinary, with the detailed inner workings of the game explored through the workers’ and donors’ stories. We see a plotline where the workers are using a contestant to help them extract organs from the perished contestants in exchange for information on the upcoming games. These workers are then seen using a complex and secret route to sell the organs in exchange for large amounts of money.

It is revealed that the bosses do not mind that the organs are being sold, after all they don’t care about money or who has it. They claim that the game offers a fair chance for those with nothing to change their lives, however it seems like more than anything the game is purely designed for entertainment purposes. The show also has complex plot twists that are both unexpected and well thought through, from the creator of the games to the undercover cop looking for his brother.

Squid Game is a gory and thrilling series that will have you on the edge of your seat one moment and teary eyed the next. The games are exciting, terrifying and some even tempting to try at home. The series has iconic and unique characters, all with real and complex lives and motivations. With incredible and creepy set designs, soundtracks and lighting, it’s no surprise that Squid Game has fast become Netflix’s most popular thriller.

Squid Game is now streaming on Netflix, but be prepared, it’s not for the faint of heart.