The steel safeguards that Clarke is celebrating are a consequence of Brexit on the one hand, and a benefit of EU membership on the other. 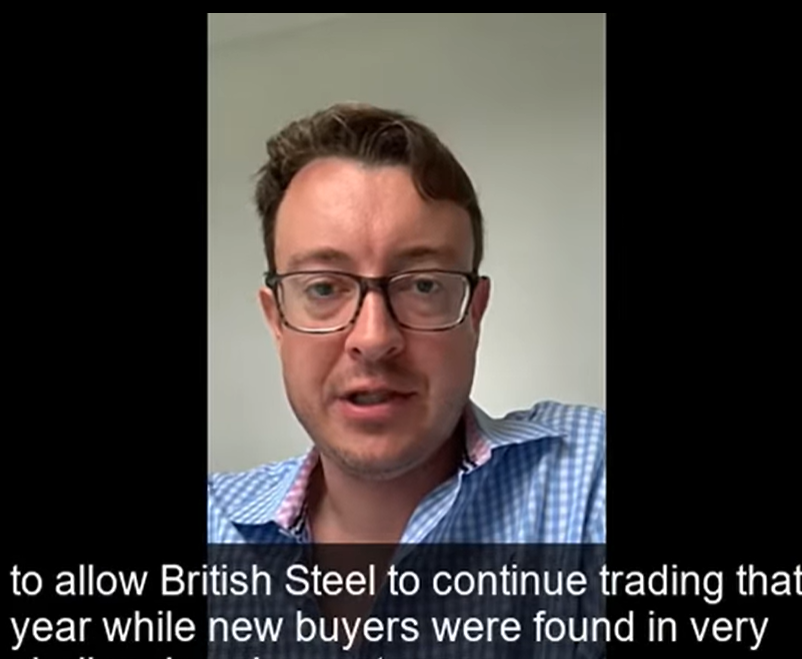 By the looks of this image from his Facebook page Simon Clarke, MP for Middlesbrough and East Cleveland, hasn’t been sleeping well recently.  As well he might, given that the steel industry has been in the spotlight on account of the threat to remove safeguards on a range of products. He was very late to the game to support Skinningrove Steelworks in his constituency, which was threatened by a flood of cheap imports.

The Secretary for International Trade, Liz Truss, whose job it was to do the removal, succumbed to pressure at the eleventh hour, and introduced emergency legislation late on 30 June to enable her to restore most, but not all of the safeguards she had been planning to withdraw.  So, Clarke, it appears, is off the hook.

The Trade Remedy Authority’s statement on which products now have their safeguard extended is here. Steel Orbis has the explainer.

Clarke was quick off the mark to get the news out that same day, the accompanying photo with him in the now de rigeur hi-viz and hard hat.

The problem is that, while he was a protectionist on Wednesday, only two days before he’d been the arch free trade buccaneer. In The Times on 28 June he wrote enthusiastically about “our buccaneering free trade agenda” when talking about the net zero economy.

But as recently as 23 June he’d written: “We are fighting hard against proposals by the independent Trade Remedies Authority which would reduce tariff protection for some forms of U.K. steel production”, which is consistent with the sentiments he expressed in 2018.

“As the Vice Chairman of the All Party Parliamentary Group for Steel, and representing British Steel Skinningrove, I am working closely with the industry body UK Steel to deliver a robust post-Brexit trade remedies regime that will prevent dumping by the Chinese.”

In March of 2018, however, as he states on his website, he was a committed free trader, and, when confronting the then US ambassador, Woody Johnson, over President Trump’s threat to impose tariffs on steel imported into the US, he stated: “I don’t like tariffs full stop, but if the President is determined to go down this path then his problem is with the Chinese, not us. Our industry does not pose a threat to American jobs, but these tariffs certainly do pose a threat to UK steel workers. I will fight them every step of the way.” Which way the wind blows, Mr Clarke?

Concerns about the removal of steel safeguards and doing nothing

By 20 May 2021, he was no longer Vice Chairman of the All-Party Parliamentary Group for Steel. Which might explain why he is no longer working closely with UK Steel, even though Skinningrove remains in his constituency. Because when UK Steel first publicised its concerns about the removal of safeguards for the industry, specifically mentioning the risk to plants on Teesside and also in Hartlepool, Clarke did nothing.

Until 23 June, just seven days before the safeguards were due to expire, when he joined a delegation to lobby the prime minister. In Clarke’s world, that’s how politics is done – behind closed doors:

Theatre in the commons?

For Clarke, then, the House of Commons is irrelevant; it’s ‘theatre’, nothing more. Except that some cynics might suggest that, had it not been for the opposition day debate on 21 June, Clarke may well have just carried on buccaneering and ignored the safeguards issue altogether.

As for ‘the Government not caring about steel’, that’s a can of worms.

EU concerns and how states voted

The EU first became concerned about China dumping steel in Europe in 2013, thus distorting the market. In 2014, and again in 2016, the EU attempted to allow the imposition of higher tariffs (by scrapping what was known as the ‘lesser duty rule’) to prevent this from damaging steel producers within the bloc. This attempt failed when finance ministers from fourteen EU states voted against the move. Of these, thirteen were non-steel producing nations; the fourteenth was the UK, which was accused by the European Steel Association (Eurofer) of being the ringleader).

The accusations against the UK government piled up, as The Guardian reported, “Tim Morris, Tata Steel’s head of public affairs, warned the Welsh affairs committee in February that the chancellor, George Osborne, was pushing for China to get market economy status at the World Trade Organization, which would protect Beijing from the highest EU trade barriers, and that this could exacerbate the continent’s steel crisis.”

That attempt failed. China brought its case to the WTO, but withdrew it in 2019, as Reuters reported.

It is precisely because China does not have ‘market economy status’ (MES) that the WTO allows the EU safeguarding measures to be put in place, which it finally succeeded in doing in 2018, the UK’s influence in Europe having been neutralised by Brexit.

Cameron and Osborne failed to support the industry by opposing the lifting of the lesser duty rule. It has to be said, however, that this was not a sin of omission. In February 2016, when he was business secretary, Sajid Javid explained his opposition to relaxing the lesser duty rule, telling MPs: “If the duties are applied that are disproportionate it could have an impact on consumers as well … If duties get out of control it could cost them jobs and cost them exports.”

So, the move, in Conservative terms, was no failure. It was intended to protect the interests of consumers, or, as SP Global Platts calls them, ‘traders’.

Opposition to tariffs and support for China

One curious feature of this opposition to tariffs and support for China is given by Clarke in 2018, again on his website, where he describes the UK steel industry as, “still recovering from the crisis caused by Chinese steel dumping in 2015 which led to the closure of the SSI site at Redcar.”

Except that in 2015, as the BBC reported, the stated reason for the closure was that the plant had never been profitable.

The government first prevented the EU from defending European steel producers against Chinese steel dumping, which was then the cause of the demise of SSI at Redcar, and then prevented the EU a second time from preparing that defence. By the time it negotiated the Withdrawal Agreement, however, it had agreed to retain the safeguarding measures during the transition period until they expired.

So, the safeguards that Clarke is celebrating today are an unintended consequence of Brexit on the one hand, and a benefit of EU membership on the other. Had the UK not left the EU, the latter would have continued to experience difficulty in installing those safeguards. Had China, with the backing of the UK government, succeeded in acquiring market economy status at the WTO, the safeguards would not have been permissible under WTO rules.

Perhaps Clarke might consider writing the EU Commission in Brussels a thank you letter.