“This government has stripped away my rights, your rights, everybody’s rights." 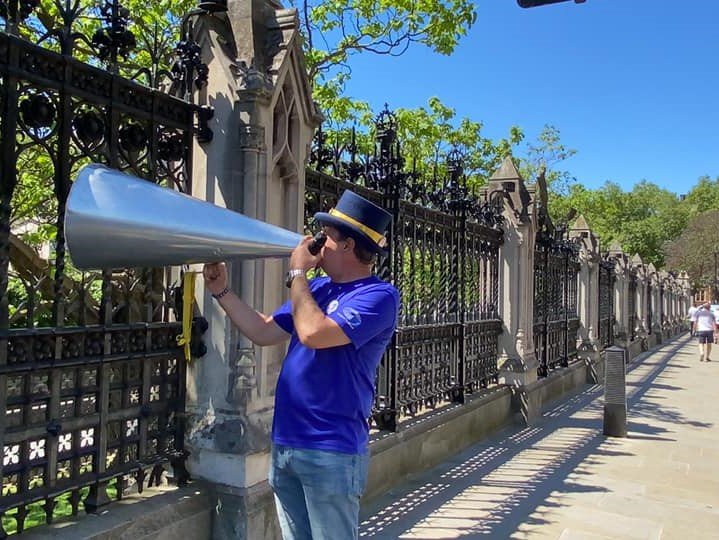 Today I was honoured to interview Steve Bray, campaigner and activist. You may know Steve from his protests outside of parliament over the last few years, and from managing to get onto many TV news programmes with his flags, placards and megaphone. His latest campaign is against Tory lies with a ‘We Demand Better’ message.

Are you still campaigning?

Steve Bray is famously known as Mr Stop Brexit. I asked him now that Brexit has happened is he still campaigning and if so what about?

Steve is very definite about this: “Yes, the campaign absolutely is still going. Halfway through the Brexit campaign it became clear that there was more to it. It’s about this government.”

He went on to explain that he is from Port Talbot, one of the poorest communities in Britain. People there mainly voted to leave the EU in the referendum. This was based on a promise of a better life from the government.

“They were cheated. They were deceived. Our campaign now is to get this government out. It’s to get a fairer representation for people up and down this country. For every one of us.”

He also says that it is critical that we work towards being part of the single market and the customs union.

My next question was about protest and pandemics. Some people have been critical of protests going on during the pandemic. What do Steve and other protestors do to keep people safe?

Steve explained that he completely understands people’s worries on this issue. During lockdown much of the protest happened online. He then went on to talk about a particular day.

“I’ll give you an example. 24 December [2020] for instance. We were in a lockdown but people still had a right to protest. I was at Downing Street…this was when Boris Johnson announced his Christmas gift to the United Kingdom. Now we all knew it wasn’t going to be a gift – it was going to be a disaster. But somebody had to be there. I didn’t call for anyone else to join me. I drove to parliament on my own, in my car and didn’t travel on the tube…”

Steve talked about that day on his own, outside parliament with the world press there. He said that the police presented him with a £200 fine for “breaching Covid regulations”. At the time this was reported in The New European.

Steve has clearly shown a huge commitment to his protests. I wondered if he had always been involved in politics?

“Funny you should ask because this is my first ever protest. It just never seems to end. I felt so strongly about what was going on.”

Steve said that ideally he just wanted a quiet life, to keep his head down and enjoy himself but that

“This government has stripped away my rights, your rights, everybody’s rights. They have divided this nation…they’ve lied, they’ve cheated and nothing about this government is honest…In a modern day democracy that is frightening and we have to do everything we can to oppose it. “

I went on to ask Steve if there were any particular memorable moments throughout his campaign. His reply was poignant and moving.

It was all about the people. Thousands of them. The people who came from all over the UK to jpin SODEM (Stand of Defiance European Movement) at parliament.

“Everybody is unique, Everybody who has come down has made an effort. They’ve stood and wanted to be heard…they’ve wanted the world to know that what is happening here…the majority of Britons do not support what this government is doing.”

This brings us on to the new planned campaigns. There are to be a series of events happening in various locations around the country. The key message is ‘We demand better’ and there will be a local focus at different events. To date the events are confirmed in London. Newcastle, Leeds, Manchester, Liverpool and Nottingham.

The London event will take place on 23 June at Westminster. This runs from 11am to 7pm and everyone is welcome to attend.

Steve Bray does not want to just wait four years for an election. He sees protest as something that must continue. He mentioned the immense change brought about by the Suffragette Movement and how we must not give up.

Steve is passionate and positive about the people in our country. He says:

“It is down to all of you. All of you make up the United Kingdom. If you live in the EU and you are a British citizen or if you are are EU citizen living in the UK. You all make up this diverse and wonderful United Kingdom.“

“For us to sit back and do nothing is not an option.”