This week id the start of three days of protest by Steve Bray and SODEM outside parliament. It started with Brexit and now it's about corruption. 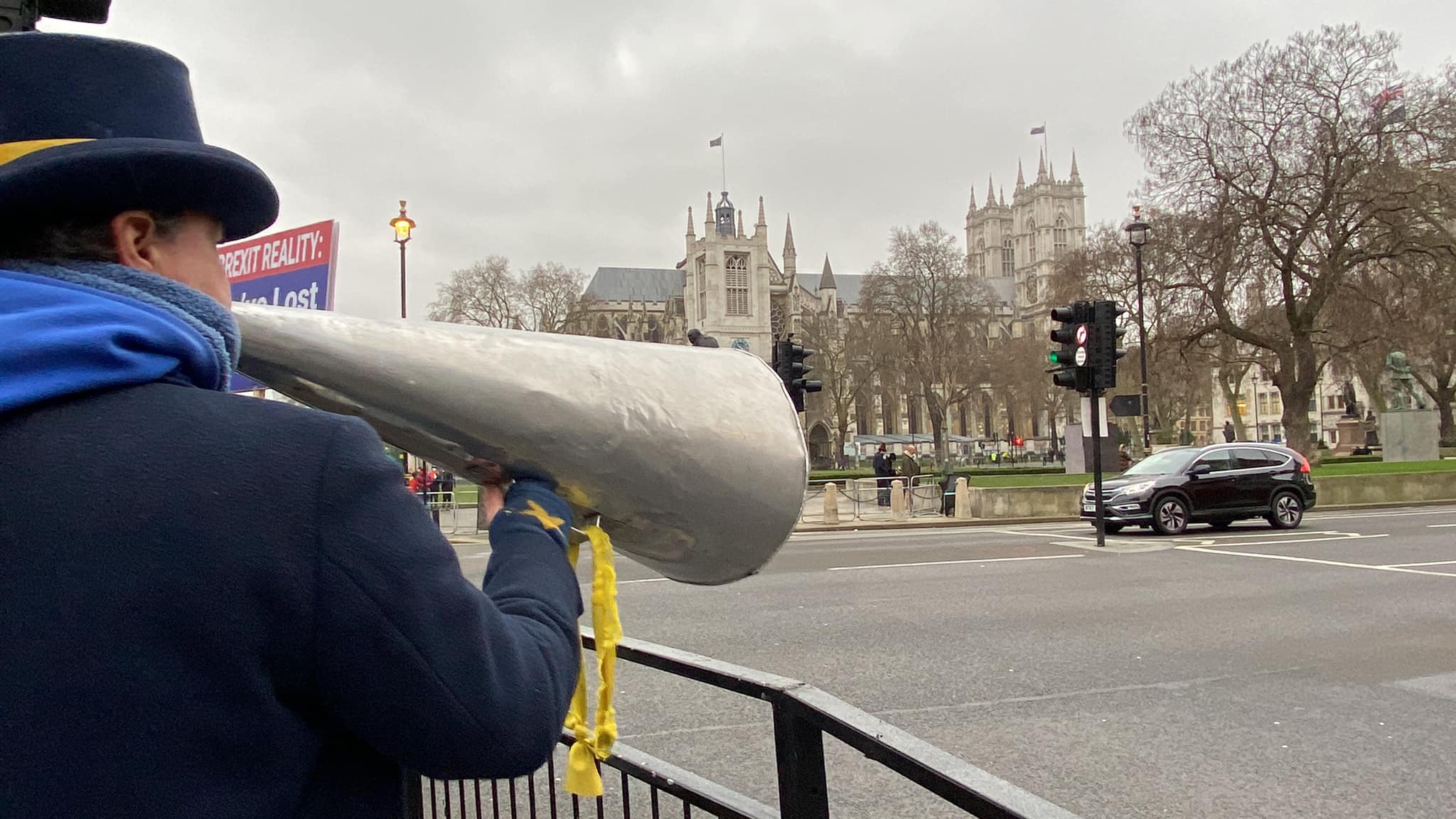 Steve Bray and fellow SODEM (Stand of Defiance European Movement) protestors will be outside parliament on Monday, Tuesday and Wednesday this week to continue their protest against what they see as a corrupt government. They will be joined by North East for Europe and will be prepared with banners, placards and music. They will be there from 10am till 5pm on each of these three days.

A few months back North East Bylines interviewed Steve Bray, known as Mr Stop Brexit, to talk about his years of campaigning. You can watch the interview below.

Now that Brexit has happened, Steve and the other campaigners continue to put on pressure to hold the government to account on a range of issues including the Policing Bill, the Elections Bill, the government’s handling of the pandemic, and of course so-called ‘Partygate’.

SODEM regular Gareth Kearns had this to say:

“SODEM protests every Wednesday Parliament sits to greet Johnson as he comes in for PMQs. Yes, it all started with Brexit, but it’s now about corruption – after all, Brexit was the consequence of corruption.”

“We’ve all seen the litany of corruption grow over the last few years, the proroguing of parliament, the giving contracts to mates rather than to tried and tested PPE suppliers, the parties in lockdown, the underhand funding of Johnson’s redecoration of No.10, and now even the blackmailing of MPs, and, just this weekend, accusations of islamophobia in the Tory party. Every day, another scandal. And all as this corrupt government attempts to outlaw protest, overrule judges, and jail journalists for “embarrassing” them.

“… A policing Bill that removes some of the oldest rights the British have enjoyed. Some Tories have even suggested assuming the power to overrule juries.”

Recently the group has been a presence at Westminster every Wednesday but this has stepped up to three days this week due to the pressure on Boris Johnson to resign and the possibility of a vote of no confidence.

The group also campaigns for a return to the European Union.

Louise Brown from Sunderland who is a committee member of North East for Europe regularly joins the SODEM protests. Louise says:

“I feel it is important that the voice of the North is also represented in these protests so it isn’t wrongly tarnished as a London movement e.g. as Michael Fabricant MP recently stated. It’s also important so that not every Northerner is thought of as a rabid red-waller who loves Johnson as that just isn’t a true image either”.

I also spoke to James Sheerin, another member of North East for Europe who is involved in campaigning with SODEM. James said:

“The important thing about the SODEM protest is that we make our presence seen, heard and felt. Our politicians and the people need to be reminded of the terrible mistake they made in deciding to leave the EU.

“Initially the focus was on trying to stop Brexit happening. We don’t deny the reality of what has happened, but we’re not going to ‘get over it’.

“We’ve witnessed the most corrupt government the country has seen in the modern era, the illegal shutting down of parliament and the destruction of our constitution and aren’t going to go away until those responsible are brought to account. The time of decent politics has gone.”

“Under Johnson’s Conservative government there are no standards. Every day the government and the country sink further into the mire. Just now we are campaigning to bring to people’s attention to the destruction of our human rights by the Police and Courts Bill, which seeks to impose prison sentences on those who make noisy or seriously annoying protests.

“If this Bill is enacted we will continue to protest in Westminster and around the country. If we stop, what hope is there for the future?

“We don’t apologise for making a loud noise… We will always do our best to get our message attention from the media.

“We need to show people that there is still hope and encourage others to do whatever they can to ensure that our children and grandchildren can enjoy the opportunities we enjoyed as European citizens.”

How to get involved with SODEM

“We need all hands to give it every bit of a push. SODEM appears in the national press, and, believe it or not, the international press, multiple times every week. We are the visible signs of dissent. We are how the UK, and other countries, know that we are not just going to roll over and take it. So, this week, as we wait on the Sue Gray report, come join us. Lend your voice to the dissent. Be seen. As the MPs file in, show them that we’re not going to just lie down. The corruption must end. This is OUR country.”