"I had to decide whether or not I was truly content to be arrested." 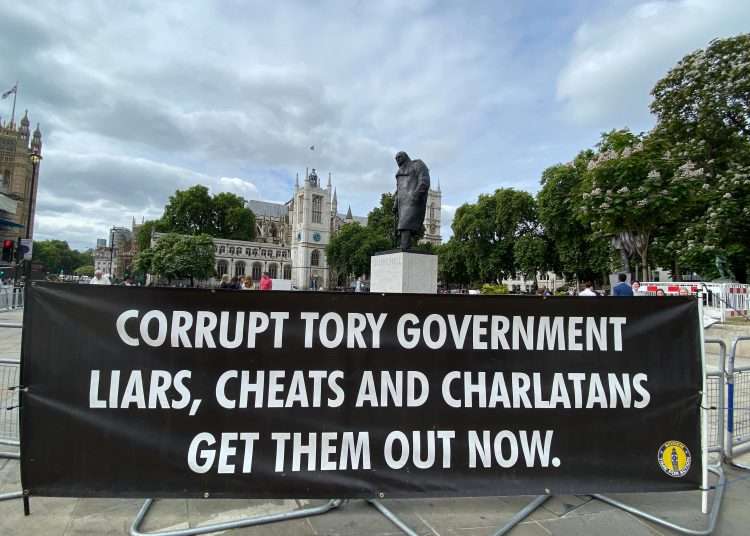 I had to phone in sick on Monday last week. And some of you might decide that I was skiving when I tell you why, but really, I wasn’t. I had to give some serious thought to a matter that was pressing in on me.

I had to decide whether or not I was truly content to be arrested.

The conclusion I came to, was that, yes, I was content to be arrested. For this.

“This” being the standing up for the right to protest, specifically, the SODEM protest outside parliament.

New laws via the policing bill were to come into force the following day, Tuesday, and our protest would be, as usual, on Wednesday. We’d seen this coming a long way off, and I wrote about how the Police, Crime, Sentencing and Courts Act 2022 offended against our essential freedoms previously. Steve Bray, Mr Stop Brexit who stands at the centre of SODEM (Stand Of Defiance European Movement), was going to make an appearance in Westminster on the Tuesday to mark the law coming in, but had been told by police liaison that nothing much would happen that day.

So, I’d made my peace with the idea of being arrested in defence of our right to protest, and expected to make that stand on the Wednesday.

On the Tuesday, I prepared to start work. I work from home. Having my morning coffee I’m browsing social media, and then then saw some tweets from Steve that made it clear the police were gearing up to move in.

I was able to come into London. I was at Westminster within an hour.

About 20 minutes later, this happened:

Curiously, you’ll note that it isn’t the new Policing Bill that is invoked here, but rather section 145 of the Police Reform and Social Responsibilities Act of 2011. We can only surmise that the Home Office isn’t so very keen to test the new law just yet.

The amps were taken. I asked for a receipt, but was told that no receipt was necessary as they were being held as evidence. As I said to the officer in question, smiling broadly:

“Good, because the last time you seized our property, a banner, it was summarily destroyed. We can assume The Met is not going to destroy evidence, can we?”

The story was picked up by the press, and indeed was mentioned almost immediately on BBC’s Politics Live show:

You’ll note that Andrea Leadsom here again took an opportunity to falsely accuse Steve and SODEM of being abusive, pretending our protest was comparable to the way extreme right wingers have threatened the likes of Anna Soubry or Diane Abbot – both of whom have successfully won convictions of their abusers. No one has ever brought charges against us at SODEM because, prior to that Tuesday, there was no law against asking our parliamentary representatives to explain their reasoning for backing policies. That is what we do. We ask MPs to justify their positions as they push policy in the legislature. And surely we all of us who grew up from babes in the UK always believed we had at least a right to do that much?

The vast majority of the press commentary aligned more with Chris Bryant’s appraisal. Indeed, even the traditionally Tory The Spectator has since come out quite forcefully, if grudgingly, in Steve’s defence ..

The Twittersphere erupted. Later that afternoon we were joined by people we’d never seen at the protest before. It was actually all rather encouraging. And – we weren’t arrested. However, we were shadowed by police officers for the rest of the day. They followed us as we crossed over to Carriage Gates, they followed Steve as he led them a merry dance through the arcade beneath Portcullis House. They were making an effort at a sort of low-level intimidation which we have not seen before, and which I would wish was never a police tactic in this country.

Steve was told he may be summonsed, but by the time he was interviewed by Victoria Derybshire on the BBC later that day, the Met had issued a statement to the effect that he would be “considered” for prosecution.

All this was the Tuesday. The regular SODEM protest was made on the Wednesday, to accompany Prime Minister’s Questions. We assembled that morning.

We yet had one amp that Steve hadn’t brought on the Tuesday as it’s the oldest, its handles are broken, and two amps have usually sufficed for our protest. It was dusted off and brought out of its retirement as a glorified battery charger. We played and sang along to a couple of tracks, most notably the Italian anti-fascist anthem “Bella Ciao”. The police arrived, pulled out a map that delineated the newly extended exclusionary area, so we took the amps to the arcade and played again, occasioning much press interest and a sprightly discussion as to what might constitute “the public highway” (something that has tied up lawyers in many a case over the years). It was during that playing that Alistair Campbell came to show his support for our protest.

Since we were damned wherever we would go, we decided we would therefore play from the traffic island that has served as our base for some years now, and, well, be damned. We made sure that the press knew about it, and decided we’d play “Bye Bye Boris” (to the tune of either The Bay City Rollers or The Four Seasons – depending upon your vintage – song “Bye Bye Baby”), sing along to it and get caught by the police at 15.00.

So we did. And the police had disappeared. Honestly, they were everywhere at 14.00, but an hour later, they’d gone. We did our thing, to much friendly waving from passers-by. Many people cheered us, some shook Steve’s hand, and a couple left stray £20 notes in his palm with the suggestion that more amps might be bought.

Asked what he thought of the police operation, Steve responded:

“Well, it started badly, it tailed off a little in the middle and the less said about the end the better”.

A C Grayling appeared, with words of encouragement.

I was asked to explain where we stood.

What had preyed upon my mind as a crisis that could require some personal sacrifice had morphed into a bright affirmation of what some of us had now devoted years of our lives to. But perhaps more importantly, it had revealed a more profound concern, and often from people who we might usually consider to be on the other side: an understanding that there were deeper concerns coming into play, a matter of fundamental rights essential to the character of our nation, to the security of the legacy of our grandparents who had fought fascism. You don’t have to be pro-EU to understand that other people have the right to express their wish to see us in the EU. You can be absolutely anti-EU, and still respect people’s rights to disagree. We may all of us campaign and lobby for the country we want to live in. We won’t always get our way, but as long as we can make our argument and try to convince our fellow Brits, we are free.

Amplifiers, banners, trips to picket the party conferences, all this costs money. SODEM has been supported with contributions from like-minded souls for a couple of years now. Not everyone can travel from all over the country to join us (although I’ll mention in passing that we have a number of SODEM regulars who come from as far afield as Birmingham, Sheffield, and even Newcastle) but people can still help us financially, and they have. The funding by people who care about the lies and corruption that got us into our current sorry mess has kept the protest alive. Your fellow Brits putting their hands in their pockets and sending us a tenner here and there: that’s what’s kept us going.

And since the day the police decided to acquiesce in the rise of fascism, it’s gone into overdrive. We have received around £150k in donations in the last week. From regular guys and gals up and down the country. Concerned citizens who don’t see anyone other than a guy in a top hat and his mates holding a corrupt government to account. And doing so via the medium of silly songs interspersed with Blackadder quotes.

So, thank you. The protest will continue.

£150k buys a lot of amplifiers. The police may, possibly, confiscate them all.

The Big Top comes down

The Big Top comes down