Katie Maughan reviews a new Netflix series, Superstore. If you enjoyed Parks and Recreation then this may be for you! 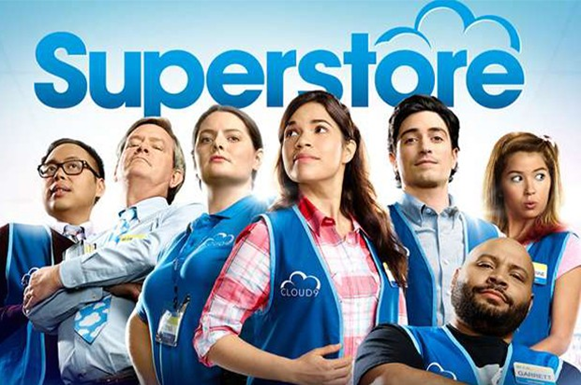 Superstore is one of Netflix’s most recent hits, a sitcom about the lives of a team of floor workers in a supermarket chain. With humour similar to that of popular series like Parks and Recreation and Brooklyn 99, the show turns a mundane day job into a hilarious series with relatable quirky characters.

Superstore has a lot of diversity within the show, with multiple POC and LGBTQ+ characters. Topics of feminism also come up within the show, when women are seen in positions of power within the company. The show is relatable to almost everyone, as the characters are very grounded in reality despite their quirks.

The characters deal with real everyday problems such as struggling to balance work life with social lives and parenting, divorces and even unionising. These topics don’t necessarily sound  the most entertaining, but as demonstrated by sitcoms previously mentioned, good writing can make them hilarious.

Protagonist Amy has worked in Cloud Nine for over ten years, after becoming pregnant as a teenager. Unable to go to university, she works at the store to support her family. She has many regrets about her life. Jonah joins the store as a new worker after dropping out of university, filled with bright ideas and positivity.

Jonah and Amy clash a lot due to their wildly different backgrounds. Over the course of the show, we see their relationship progress as each matures and begins to influence each other. Amy learns to believe in herself and set her sights on higher goals, and Jonah gradually matures and becomes more grounded.

We get to see the whole group of characters mature and improve themselves as the series goes on, from becoming adults to getting promotions and even having kids.

The sitcom also tackles some deeper emotional topics, with one of the main characters being faced with detainment by ICE after discovering that they were brought into America illegally as a baby. The storyline is tear-jerking, and a scary reality that faces some.

We also see one of the lead characters reunite with their previously absent father, after seeing the lasting effects that his leaving had on them. They naturally have mixed emotions, first eager to gain his approval and fix their relationship, but later realising that they can’t replace the years of missed memories.

Despite being a show about real life issues and emotions, it’s a very easy show to watch. The characters are fun, and we see the humour in everyday store events. A power cut trapping everyone in Cloud Nine overnight becomes a staff sleepover, new scanners in the store turns into a store-wide laser tag game, and an in-store haunted house turns into a series of elaborate pranks against a floor worker.

Superstore is the ideal series to watch to put you in a good mood! Fans are waiting for the final season to come to Netflix, so now is the perfect time to start the series if you haven’t already.

Fishy tales: a whale of a time with ORCA on the DFDS ferry