Teesside enjoys its Palmyra moment, as Redcar Blast Furnace is torn down 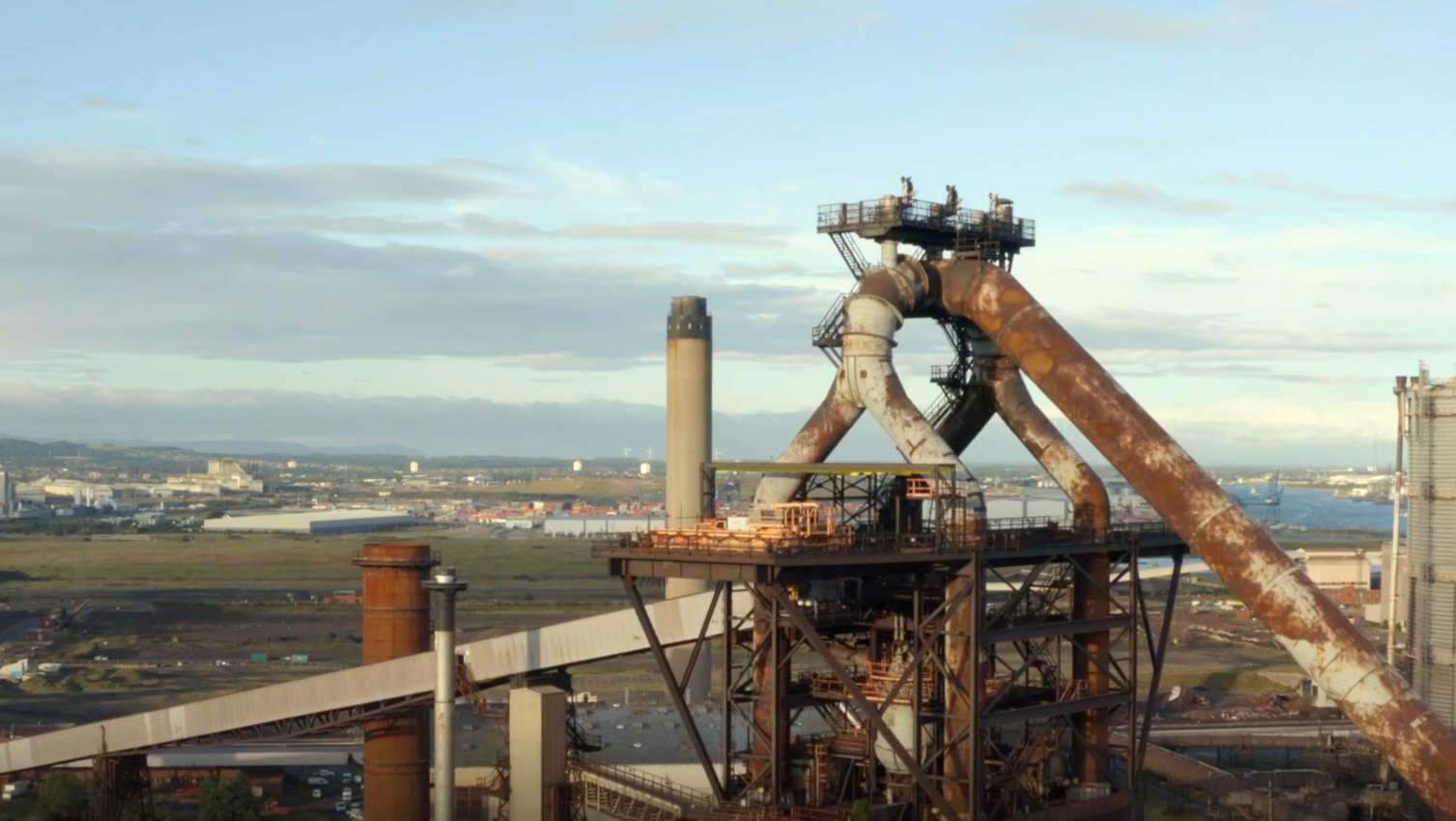 The destruction of Redcar Blast Furnace has begun in earnest, with the Teesside Heritage Taskforce on hand to record the action on film for posterity. Soon the people of Teesside will be able to survey the roofs of the never-ending warehouses of the freeport, monuments to low pay and tax evasion, as if that is what had always been there. Cultural amnesia.

Houchen fires the starting gun at the beginning of Teesside’s year zero, condensed destruction, with his acolytes waving madly in support. Acolytes for whom Teesside’s past is an eyesore, a ‘pile of scraps’, something to be removed from the collective memory at the earliest opportunity.

A different future was envisaged

But it hasn’t always been like this. The South Tees Development Corporation Masterplan in 2019 envisaged an entirely different future:

“Preserving some of the area’s industrial heritage is an important part of the overall regeneration proposition for the STDC area, and a cornerstone of the landscape and open spaces strategy …

“… Redcar Blast Furnace is ideally situated for preservation as a major landmark and visitor attraction. The proposals … would reveal the sheer scale and complexity of the Blast Furnace. The Coastal Community Zone of South Gare and Coatham Sands would offer some stunning vistas of the Blast Furnace, which would be augmented by the introduction of night-time illumination – as has been successfully achievd on similar projects around the world.”

Eloquent, but meaningless, as it turned out.

On 4 September 2020, the TVCA published the following:

“As part of the on-going consultation into the future of the site, Mayor Houchen has now formed an independent heritage panel made up of local politicians and industrial heritage experts to review the suggestions made and decide on ways to commemorate the site.

In January 2021 it published a report recommending that the blast furnace be torn down.

Oddly irrelevant, as Houchen had already put the demolition work out to tender in August 2020, as reported by the Association for Consultancy and Engineering. Does that make jobsworths of the members of Teesworks Heritage Taskforce?

“The end of steelmaking on Teesside”

In June this year Houchen was quoted as saying that “all major steel facilities … [will] … be down within a year”.  Then, on 26 July,  the Northern Echo  reported that demolition had been brought forward and would begin the following week. In Houchen’s words,

“For many this will be a bittersweet moment. It will be a physical reminder of the end of steelmaking on Teesside in 2015, but it is also one that will fill us with great hope, one of future jobs and one of opportunity.

“People will see a transformation of the skyline across Teesside in the months ahead, but it will be replaced with a new skyline of more investment and more jobs for local people.”

The Teesworks Heritage workforce, meanwhile, is busy assembling the material for an exhibition of steelmaking, including the last slab of steel to be made at Redcar (we hope that a suitably large exhibition space can be found.  British Steel is currently offering slab for sale, minimum length 6.9 metres). We notice that Kirkleatham Museum is advertising the SSI Heritage Task force on its website.

So, a massive turnaround, and a surprisingly urgent determination for the blast furnace to be torn down at the earliest opportunity while simultaneously ensuring that key sections of the STDC Masterplan be torn up.

We can’ t help but notice another coincidence, however.  Mayoral elections were due to take place in May 2020, and campaigning had already started when the pandemic caused them to be postponed, to be resumed in 2021. There is one key difference between Houchen’s re-election campaign between 2020 and 2021. In 2020, the prospect of steel production returning to Teesside was a key part of his platform, as the Northern Echo reported:

“This is my promise to the people of the Tees Valley. If elected, I will bring steelmaking back to Teesside and I’ll restore our rightful place as a global leader in the steel industry.”

This was around the time that Jingye was negotiating the purchase of British Steel and was talking up the possibility of establishing an electric arc furnace at Lackenby.  As the year wore on, less and less was said about this investment.  We wrote to British Steel this week to ask for an update on their plans, but they remain tight lipped.

No mention of steelmaking

Maybe Houchen knows something that we don’t, because by the time of the launch of his 2021 election campaign there was absolutely no mention of steelmaking anywhere.  Perhaps the talk of an electric arc furnace at Lackenby was just grandstanding by Jingye, never to be realised, much like the hotels Donald Trump was to be building next his golf course in Aberdeenshire.

Which leaves you wondering whether he now feels he was gullible in 2020, claiming credit for something that would have had little to do with him, only to see it vanish within months. We have now reached “the end of steelmaking on Teesside”. Whoops.

Now, erase the structure, erase the memory, the memory of his self-importance. And if comes at the cost of erasing the memory of those who worked in dangerous conditions, whose labour created iconic steel structures around the world, whose families breathed in the polluted air, then so be it.  In Houchen’s world they are dispensable.  As they are in the sycophantic world of the Teesside Heritage Taskforce.