We didn’t set out to become Brefugees. What happened to us may well become more and more common as the UK’s Brexit recession sets in. 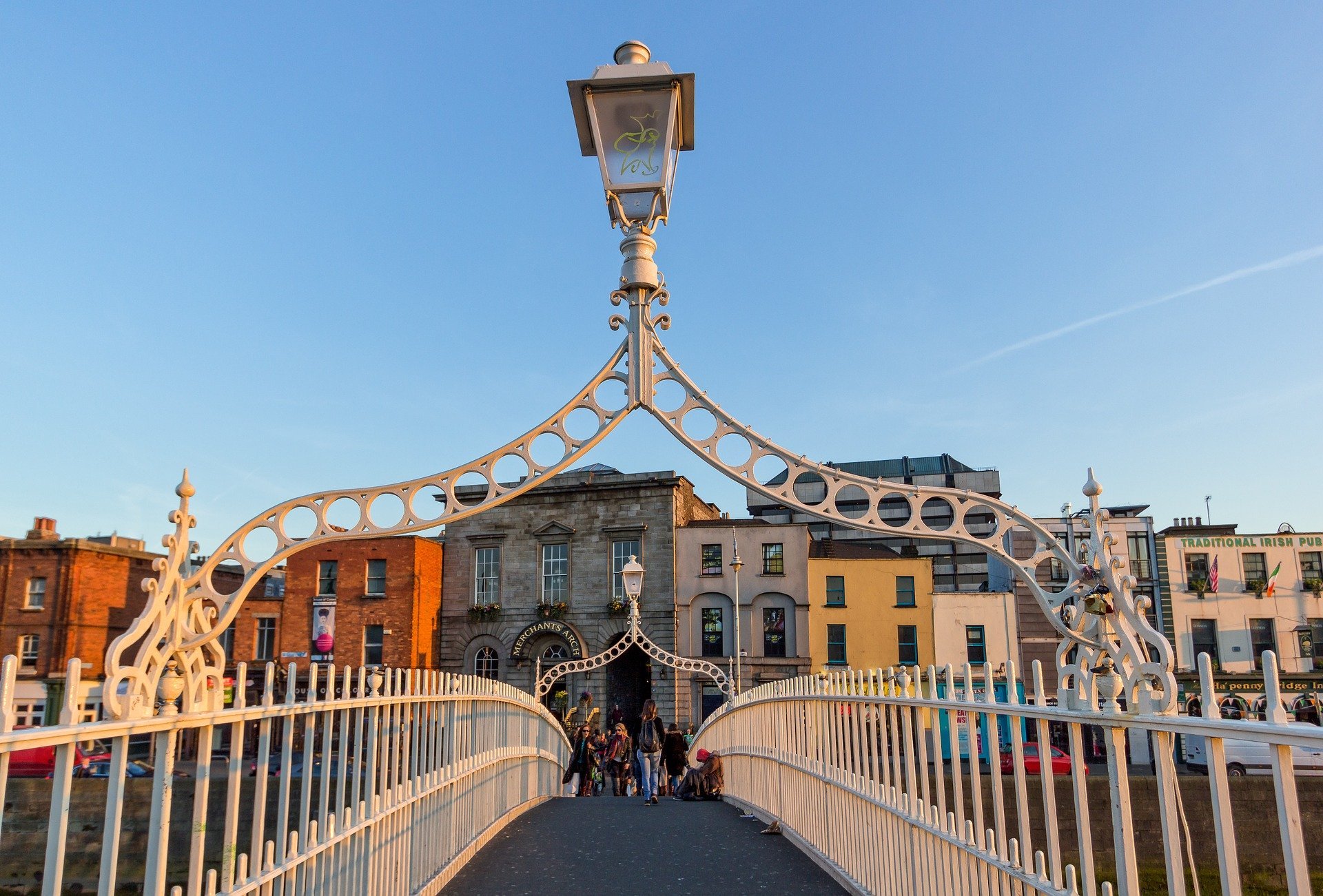 The Ha’penny Bridge, Dublin Photo by papagnoc courtesy of pixabay

We didn’t set out to become Brefugees. What happened to us may well become more and more common as the UK’s Brexit recession sets in. My husband, Frank, was made redundant from a relatively senior role in pharmaceuticals in the North East, and although he applied for jobs everywhere from Edinburgh to the Isle of Sheppey, nothing came to fruition, which was surprising: his expertise is in the manufacture of sterile injectable pharmaceuticals – like vaccines, for example.

Only a Dublin-based company seemed keen to employ him. We thought about it. We could stay in the UK, jobless, and be ready to move when something came up, or we could consider that proverb about ‘a bird in the hand’ and go where he was needed. I might even find some work myself. Eventually I was persuaded that we should go. Under lockdown, the change was surreally low key. On a Friday at the end of May, he logged out of the laptop he had been using at our dining room table since March and handed it in at his old office; on the following Tuesday, he opened up the new laptop that had been couriered to our house in Teesdale, and carried on working from home.

Meanwhile, how to sell our house in lockdown? The estate agent came round in a socially distanced way. Immediately she apologised that their photographers were furloughed and not allowed to work, but she did know a self-employed cameraman who might be willing to create a video tour. The house was on Rightmove for three days. In that time, we set up a viewing, with masks and hand sanitiser, and accepted an offer. It was so straightforward it felt like fate.

We decided to rent to begin with, but we couldn’t view any houses because under Irish Covid-19 advice, all visitors from abroad first have to spend fourteen days in quarantine. So, Paula from the relocation company visited some houses and gave us a WhatsApp video tour. (It was such a blur that when we finally got there, we realised there was an extra bedroom that we hadn’t noticed.) At least this assured us that the house was in good condition and didn’t smell of damp. So we printed and signed the lease, scanned and sent it to the letting agency, and we had a new address.

Our Teesdale friends gave us a great send off – no hugging – and the following day the removal company arrived. My husband took the ferry, picked up the keys and supervised the removal men. I arrived the following day with our two cats, Socks and Zoe, who spent a miserable ten hours in their baskets, including three hours parked on the car deck of the ferry, while I had a sandwich and a coffee in the mostly empty cafe. We had to fill in forms to tell the Gardai where we would be spending quarantine, although it’s fair to say they didn’t check up on us. Thank goodness for Tesco online, who kept us alive for those first two weeks.

Dublin is a city with about four times the population of Newcastle. We didn’t want or need to be in the centre, which is just as well because the economy is booming, and rents are atrociously expensive. Imagine the Dublin equivalent of Tynemouth – a pleasant seaside town with bijou restaurants, a few fancy shops, a marina, and a castle. That’s Malahide, where we are now living, and it is the most expensive town in Ireland, apart from a few areas of Dublin City where the millionaires live, Dalkey, Blackrock and Ballsbridge.

Frank had Irish parents and applied for his Irish passport not long after the EU Referendum, and I am British. We are both entitled to live in Ireland without visas and with even greater rights than EU Freedom of Movement. Conversely, two of his Dublin-born cousins have been living in London for decades. These rights are conferred by the Common Travel Area, which has been in existence since Irish independence in 1922; both Britain and Ireland have promised to honour it after Brexit is complete. Any UK citizen is entitled to follow us and I think the Irish State is preparing for an influx – a ‘brain drain’ of Brits coming to work in IT, manufacturing and finance. Working in the public sector is a bit tougher – for instance, teachers in state schools need some fluency in Irish, a language I’ve been wrestling with for three months now and it’s fiendish. We are conscious that we are nationals of the former colonial power, but the CTA means that many Irish people have spent time in the UK and don’t seem to make generalisations about the British. Our neighbour stopped to chat, while teaching his kids to ride their bikes in the street and reminisced with Frank about the years he spent as a barman in Kilburn.

Sometimes in Ireland it’s hard to know you’re abroad at all. The plugs and sockets are the same, driving is on the same side of the road, many shops and brands are familiar. You can pick up the BBC and Channel 4 on your TV. Thanks to the fall of sterling, shopping is a bit expensive, but making the switch to Irish brands helps a lot, and the quality of food is excellent. We are wrestling with a certain amount of admin, like applying to re-register our cars with Irish plates, and getting PPSNs, the equivalent of National Insurance numbers. These processes have not been improved by the furlough of Irish civil servants, but I get the impression that unlike HMRC, the Irish tax office wants to be helpful and does not treat every applicant as having fraudulent intent. But sometimes the difference pulls you up short. The strangest thing I’ve seen so far is that the Irish Met Office website, Met Eireann, carries a potato blight forecast, which is chilling.

British people might be surprised to hear that the handling of Covid-19 here also comes in for criticism, but at least there is a feeling that the Irish government is competent and sincerely trying to do the right thing. The head of the Irish tourist board, Fáilte Ireland, recently resigned because, despite the government’s advice to take holidays in Ireland, he took his family to Italy this summer. I can’t imagine a British official putting their hands up in that way right now.

Will we stay in Ireland? Well after a year of renting we do plan to buy a house and will be in Ireland for the next few years. Being the spouse of an Irishman, I qualify for citizenship after three years, after which I will regain my EU treaty rights. As for coming back to the UK – I feel an amount of ‘survivor’s guilt’ for leaving everyone to deal with Brexit, but of course Brexit is not directly, at any rate, the reason we left. We will miss friends and relatives, but we are hoping that by the time we retire, the UK might have come to its senses. Until then, it is pleasant to live in a country where 89% of the population is in favour of EU membership. We do hear worrying claims that the foreign far right is trying to stir up problems in areas of Dublin with a high proportion of immigrants, but we’re hoping that comes to nothing.

I never thought I would become an economic migrant, but then again, who predicted any of what the last few years has thrown at us?

Boys from the Blackstuff: an insightful drama to our own hard-hit times