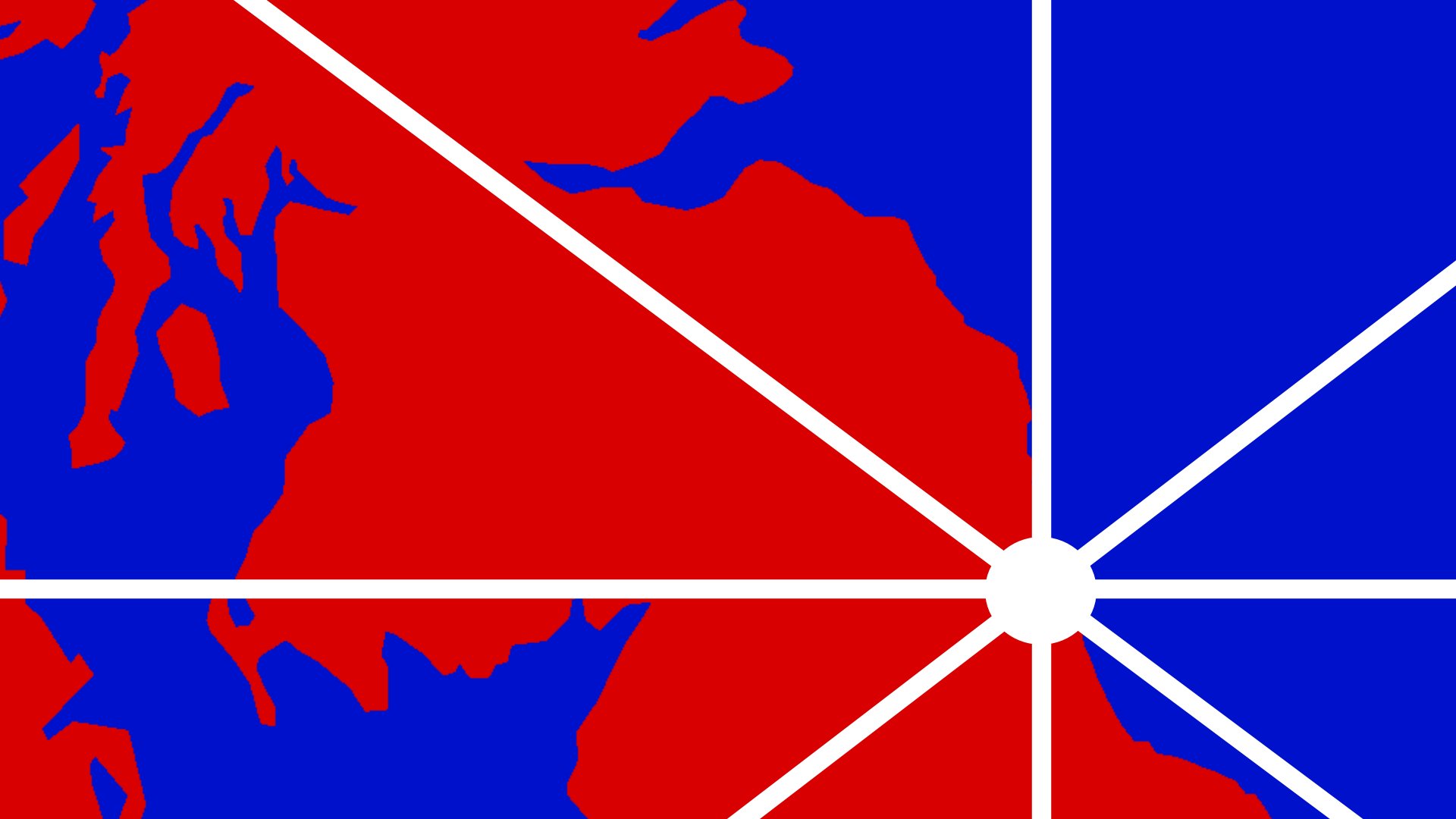 Image: by the Will Sadler, based on 'Great Britain' by Marvdock from the Noun Project. Used & adapted under Creative Commons 3.0 licence

It was in January 2018 that leaked government analysis made national headlines by suggesting Brexit would hit North East England harder than any other part of the UK, even if a comprehensive trade deal was reached.

Fast forward three years, and the deal has finally arrived – at the very last minute and giving businesses only days to prepare. Whether it is truly ‘comprehensive’ or not, is certainly a matter of debate.

Boris Johnson’s Brexit treaty, secured amongst much fanfare on Christmas Eve, is an unprecedented ‘trade and co-operation’ agreement between the UK and the EU; unprecedented in that it is the first agreement in the world that aims to make trade harder, rather than easier.

As a whole, the UK buys more goods from, than it sells to, the EU – known as a ‘trade deficit’. However, North East England is the only English region where the reverse is true: we sell more to the EU than we buy. Therefore, a trade deal which makes it harder for us to sell products to Europe is hardly good news for our region.

Despite the decline of UK manufacturing over the decades, the sector remains the ‘lifeblood’ of the North East economy, according to Jack Simpson, Global Network and Training Adviser for the North East Chamber of Commerce, who spoke to me before the UK/EU treaty was agreed.

According to the North East Local Enterprise Partnership (LEP), in 2017 manufacturing was the second largest provider of jobs in North East England, employing more than one in ten workers. In 2015, we had by far the highest per-capita value of goods exports to the EU than any other part of the UK. In 2016, around 60% of our regional exports went to the continent, and our region has a higher number of jobs created by direct foreign investment than any other outside London.

So, the ramifications of this Brexit deal are far from abstract. They will have a significant impact on jobs and livelihoods in a region that already struggles more than any other across a range of quality-of-life indicators.

But surely, now that we are free to strike our own trade agreements, can’t “Global Britain’s” manufacturing sector simply start selling more to other parts of the world?

“What goes under the radar is that those manufacturing plants (in the North East) are foreign owned by, say, American parent companies that are set up in the UK to serve the EU market” Jack tells me. “They’re not selling to Brazil. If they want to do that they would set up in Brazil.”

“The EU is always going to be our closest trading partner, geographically, economically; that is just a fact… (It’s) called the ‘gravity model’, where essentially, we do less trade with the countries that are further away.”

The UK as a whole may have a trade deficit in goods with the EU, but it has a trade surplus in services. Ironically, services hardly got mentioned during the Brexit debates, despite comprising 80% of the British economy.

Here too, could the North East lose out more than any other region or nation of the UK?

Research by the University of Sussex found that in 2015, just under half of North East England’s exports in services went to the EU, the highest proportion in the UK.

Some of these services are directly linked to our manufacturing sector, such as aftercare for products, but the same research showed that over half of service exports linked to construction, retail and administrative support were sold into the EU market.

And yet services are barely mentioned in the 1246 pages of the UK-EU trade agreement. There are no provisions for the ongoing mutual recognition of professional qualifications, and a key ingredient in the delivery of services – namely people – will find it far harder to work on the continent due to the end of free movement.

When it comes to goods, much has been made of the ‘quota and tariff free’ trading arrangements between the UK and Europe that the deal guarantees.

However, this isn’t strictly true. New ‘rules of origin’ mean that tariffs may be applied to goods entering the EU in cases where less than a set percentage of that product is made using either UK or EU manufactured components.

This could pose a problem for Nissan, whose Sunderland plant directly employs 7,000 people, and whose concerns have drawn much attention since the vote to leave the EU. In order to avoid tariffs, no more than 45% of its car parts can be sourced from outside the UK or EU, threatening their current supply chains from Asia.

Perhaps, in the long run, this will be a good thing as it will encourage Nissan to source parts from UK producers. At one point, the Financial Times even reported rumours that Nissan might use a ‘no-deal’ Brexit to consolidate its UK market. On the other hand, it’s possible that the increased costs incurred through limiting its supply chains will threaten Nissan’s longer-term investment, which in turn would impact North East jobs.

To what extent a North East ‘freeport’ – if the region’s bid is successful – will help to mitigate the additional costs faced by manufacturers, or simply push those costs further down the road, remains to be seen.

Even putting tariffs aside, manufacturers are expected to face billions of pounds of extra customs costs in the post-Brexit world.

There are also ongoing questions about the future of European funding, something which the North East, including our businesses, has been reliant upon.

During and after the 2016 referendum, the Leave campaign insisted that EU grants would be replaced by government funds, paid for by the savings made from no longer having to contribute to the EU budget. Four years after the vote to leave, we are none the wiser.

“When we look at things like RDF (EU Regional Development Fund), which has done a lot of redevelopment in the North East, it hasn’t been announced how that’s going to be replaced” says Jack.

In addition to tariffs, customs costs and reduced funding – there is another new barrier to trade created by Boris Johnson’s Brexit deal.

So-called ‘non-tariff barriers’ rotate mainly around product standards. They include things like phytosanitary checks on agricultural produce and safety compliance checks on appliances, with the potential to add further costly paperwork and delays for UK producers.

But oddly enough, it’s in these non-tariff barriers where I find a ray of hope for the longer-term future of our region’s economy.

One impact of Brexit is that the UK is no longer automatically subject to EU laws. These laws focus on product, employment and environmental regulations to ensure a ‘level playing field’ in relation to trade. Having the option to diverge from these standards is the rather dull truth of the ‘sovereignty’ that the Brexiteers talk of.

But in reality, ‘regulatory sovereignty’ doesn’t exist. The standard-setters in our complicated global system of trade are the economic superpowers – currently the EU and the USA – which means in most cases the choice that the rest of us is left with, is who we align with.

Tom Kennedy, Policy Adviser at the North East Chamber of Commerce, and Jack’s colleague, tells me about a North East-based pharmaceutical company whose exports are split evenly between the European Union and the United States.

“Their biggest concern is that we end up in some kind of position where we’re not aligned to the European Medical Agency, we’re not aligned to the FDA (Food and Drug Administration) in the US, in which case, there are significant barriers to selling their products in (both) those markets. And that that’s a scenario which is absolutely awful for business.”

The fact that countries tend to trade most with those geographically closest to them suggests to me that despite the UK’s new-found freedoms, in reality we will remain closely aligned to EU rules.

Boris Johnson will be under a lot of pressure to flaunt Britain’s new freedoms to diverge from these standards – but hopefully, in the short to medium term, any changes will be largely symbolic, with minimal practical effect. In particular, the new customs border between Britain and Northern Ireland could act as a firewall against significant divergence with the EU. The additional checks are already causing controversy and almost half of all lorries to arrive in Belfast on the first ferry of New Year’s Day were inspected.

In my view, this offers some hope for North East England. Firstly, continued alignment would help to counteract increased barriers to trade that spring up elsewhere with our largest and closest export market. And secondly, it would provide more scope to improve the Brexit deal in the future – even if this is under a different government.

Tom tells me he’d like to see the UK continuing to build its links with the EU, taking inspiration from the Swiss model in that it will be a continually evolving, rather than static, relationship.

“There’s the opportunity to look at this and think, okay, could the UK become a leader in the green economy… in electric vehicle production and battery production?” adds Jack.

“I know a lot of investment and research in the North East is going into that train of thought. So, where we start losing … on cost, we actually might make up for in expertise, skills and research knowledge.”

Only time will tell whether these aspirations come true, but one thing is for sure.

Debates regarding our relationship with the EU are far from over, and it is imperative that North East England has a strong voice in those ongoing discussions.

Roads to re-entry Part 1: We are not in a ‘culture war’