The Glasgow rain did not dampen spirits: a personal account of a protest at COP26

It was a wet day in Glasgow but the weather did not dampen the spirits for this campaigner: a personal account by Richard Henson. 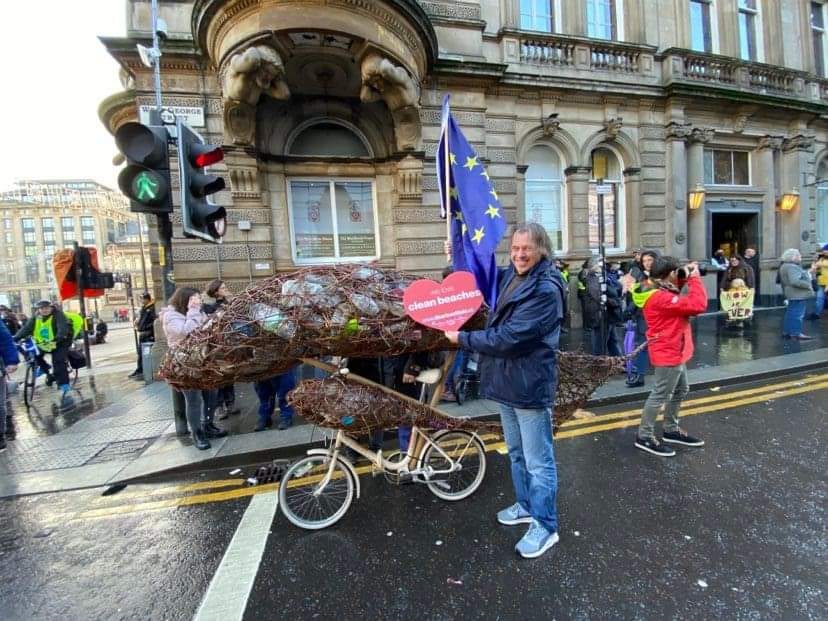 The day started well before dawn. A few of us piled into Central Station, Newcastle with about half a dozen other early starters onto the mostly empty 6.20 train to Edinburgh, en route to Glasgow. The EU and Scottish flags were effectively combined to for what would be a recurring theme for the day alongside saving the planet from man’s greed and materialism.

On our way to Glasgow!

As we approached Scotland, the light started to glint though from the east, revealing the North Sea and a grey looking sky. Everyone knew it would be a wet one, but we could enjoy the spectacular view of a new day on the appending train which seemed  to stop everywhere but still got us into Edinburgh, Waverley by just after 8am. Quiet and relaxing no more! The station was already heaving!

We clambered into the 8.15 to Glasgow, Queen Street with what seemed to be half of Edinburgh. Everyone wore a mask and the atmosphere was one of positivity. It was still quite early though so we could only speculate at how busy the trains to the COP26 march would be a little later in the day. I started to get excited as we all alighted at Queens Street and figured what to do next, in the drizzling rain.

After unloading my case at the Euro Hostel by the Clyde, we dived down into the Glasgow metro and headed for the station nearest to the start of the march. It was still before 10am and by now precipitation was as forecast so breakfast was extended while we got our bearings. The intention had been that different blocs would meet at different locations. By the time we eventually met up with Glasgow loves EU it was real Wuthering Heights weather.

Excitement at the start of the march

We joined to starting point of the march in the delightful Kelvingrove Park which still bore deciduous leaves even on a wet and windy November day. Now there were lots of people and the mass of humanity was growing by the minute. Many pictures were being taken and despite the cold and rain people were excited. With all the flags, banners, music and singing, this was going to be big! I thought about Priti Patel and her new bill to make protest quiet. No chance here, and never should that be the case.

A wee break for refreshment in Glasgow

After a bonding session with Glasgow loves EU, the cold started to get into the bones so we decided to move forward. This gave us some idea for the first time of just how massive this event had become. We walked and warmed up. We sang with different groups of protestors, supporting their different climate related issues. It was still wet and raining but everybody was so positive and happy on the streets we really didn’t care. Lots were waving from upstairs windows as we swept through the streets at a brisk pace towards the city centre. After two hours of walking we found somewhere dry to pause and take on liquid refreshment. By now, I resembled a drowned rat! Maybe the rain would pass?

Back to the Glasgow march

By now I estimated that my friend must have taken a thousand pictures but she continued to click while we sampled some of Glasgow’s best, and at a considerably lower price than south of the border. Caroline Lucas was on the March, and the green bloc had caught up with us as we all resumed our places in the march under a blue sky…

The streets were wider now and we got a clearer view of participating groups as we briskly walked along. By the time we got to Glasgow Green it was just starting to rain again. People were saying that the march behind us had been kettled, and there was no sign of any speakers.

One of our group clocked the marching distance at 12 km, which seemed about right as we had been marching from 12 and it was now past 4 pm! There were definitely more than 100,000 people, on the evidence of the sheer distance covered by so many people.https://northeastbylines.co.uk/climate-change-march-and-european-solidarity-in-glasgow-cop26/embed/

So we didn’t get to see Greta, or to see Caroline Lucas speak, but instead found a traditional Glasgow watering hole (Crystal Bell) to dry off a second time! From that point on, the socialising began, and the weary travellers found their ways back to the respective trains.

I eventually found the Euro Hotel again, but that’s quite another story! It’s a corny old phrase, but fair to say that “a good time was had by all”. The people are out, and they won’t be silenced. I just hope the politicians take note!

Does your 'honourable' MP represent your values?