Kenton councillors joined local residents for a clean-up of North Kenton Park as part of the 'Great British Spring Clean'. 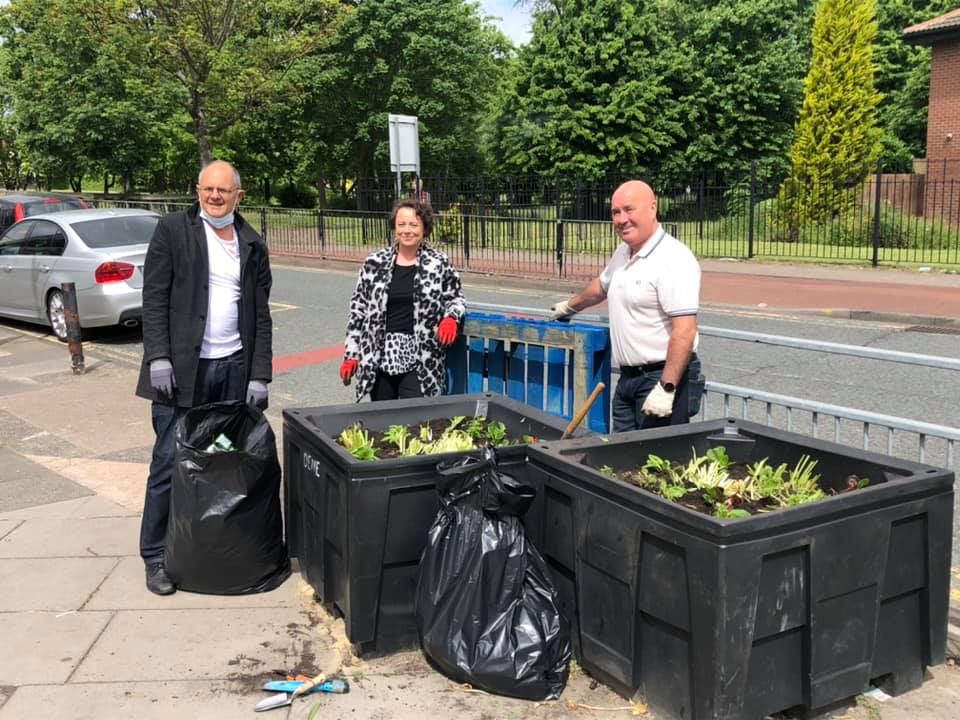 One of the most pleasing activities in the world is the spring clean. The sharp winds give way to the smooth and gentle breezes of spring; the mean and jagged trees soften their intense glare with the coming of the blossom and the rebirth of life. So, too, does the human mind desire such a rebirth after the long nights and sunless days. Birds sing and the sun smiles. The spirit of Candide and ‘this the best of all possible worlds’ is hard to repress.

Cleaning up in Kenton

In such spirit of renewal, Kenton councillors Stephen Lambert, Chair of the Kenton Committee, and Ged Bell, Cabinet Member for Environment, along with Catherine McKinnell MP, joined local residents for a clean-up of North Kenton Park as part of the ‘Great British Spring Clean’ over the weekend. The team collected more than ten full bags of rubbish from hedges and shrubs in and about North Kenton shops, Arlington Ave and Kenton Lane shops. They also restored planters, tubs and barrier planters with new summer flowers.

And the week before this, the Kenton Team tackled the ‘scourge of litter’ at Ambridge flats, North Kenton, where again over ten bags of rubbish were filled, along with the removal of items including: a fly-tipped fridge, a television, a shopping trolley (obviously) and a children’s seat. With the canvas blank, the council’s grass cutting team moved to tidy up borders, verges, planters and green spaces.

This event was certainly a success. The value of green spaces – spaces to connect with nature, to relax and meditate – has been emphasised and underlined during this pandemic. Cllr Lambert reiterated this, saying that “after more than a year in which people have relied more on outside green spaces close to home to exercise, play or socialise, a number of Kenton residents joined us in support of the annual Great British Spring Clean.”

And Cllr Bell was equally delighted by the community engagement the event inspired, saying that the “campaign and event gave us the chance to celebrate the good work that goes on in communities to keep the Kenton and Montagu neighbourhoods clean, green and tidy for residents to enjoy.”

This spring clean was, however, not just a political exercise in community engagement. According to the Kenton councillors, Newcastle City Council spends more than £2m every year picking up over 7 000 tonnes of rubbish discarded across the city streets and public spaces. This is money that could be reinvested into our wonderful city, if the ‘litter louts’ did not perpetuate a battle to maintain clean streets and green space that need not be undertaken.

But the battle is being taken to the enemy. The councillors praised local litter picking groups such as the Kenton and Montagu ‘Litter Superheroes’, and the scores of volunteers whose pride in their local neighbourhood motivates them. And they hope that these volunteers can inspire more out there who have a passion for their community and a pride in their city to come forward and help the cause. It seems to be working so far. “There’s been a sharp increase in the number of residents who have started litter-picking on Kenton Dene, North Kenton and Gosforth Central Parks, and elsewhere in the NE3 district during the pandemic lockdowns. This is to be welcomed,” Cllr Lambert added.

Since 2019 Newcastle City Council has supported a regular roster of about 300 volunteers, along with school groups and individuals; provided high-visibility vests, litter hoops and gloves; donated 155 litter pickers to various groups; lent out 861 pickers; and, supplied 3,495 black bags for collecting litter and rubbish.

This is all very well. But we must take the spirit of spring into the rest of the seasons and, continuing in the spirit of Candide that we can make this at least the best of all possible cities, ‘Il faut cultiver nôtre jardin.’

Groups can request support, the hiring of equipment or litter pickers by the Council by e-mailing hello@yourcity.yourhome.co.uk