During the years of economic decline in the North East, there was less inward migration here than elsewhere in the country. 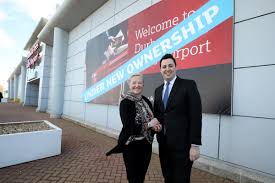 In 2017, Ben Houchen was in no doubt that it was his pledge to bring Teesside Airport back into public ownership that won him the election to become the first mayor of the Tees Valley Combined Authority. Consultancy firm ICF was commissioned to prepare a report on the state of the airport and the prognosis should the purchase go through.  Out of this a business plan was created, and, during January 2019 Houchen presented this to the five local authorities who, as stakeholders, had to ratify the deal, and, despite some misgivings, gained their approval. The airport was bought at a cost of £40 million, as a joint venture between the TVCA and Stobart Aviation, who would become the airport operator.  In March, the deal with Stobart’s was finalised and the purchase went ahead.

“Now the People’s Airport is safe in our hands, we have the plan and we have the right partner on board to make it happen. Teesside is taking off!” said Houchen that day, as his vision became a reality.

Since then, and despite the pandemic, the number of routes has gradually increased, and recently TUI announced that they would begin charter flights from Teesside (to Majorca) in 2022.  Houchen has tirelessly promoted the airport but has also not been shy about letting people in region know what’s at stake – “use it or lose it” he warned earlier this year.

Right from the outset it was clear that the Authority was faced with a stark choice.  The airport, under its existing management, Peel Holdings, was in dire straits, and without intervention was likely to close in 2021.  Elsewhere in the UK devolved administrations had recognised the strategic importance to their economies of regional airports, as good connectivity is essential to attract inward investment, and so an airport has a catalytic impact on the economy of the region it serves far in excess of the direct employment it generates.  Without the airport, economic regeneration in the Tees Valley was going to be extremely difficult.

The business case makes clear that it is only the public sector that has the investment appetite to rescue a regional airport.  The business case prepared for Cardiff Airport, which had been successfully brought back into public ownership five years earlier, also makes this point.

The ICF report considers how the airport can increase the number of passengers to a point where it achieves financial viability.  At its most successful, in 2006, the airport carried just over 900,000 passengers, but by 2017, this had fallen to 131,000. The report also notes that freight traffic was now negligible.  But while it proposes that this be addressed, it is the future of passenger traffic that is make or break. And specifically, leisure passengers.  As the airport’s fortunes declined, the ratio of business to leisure passengers altered. Nationally, 75% of passengers fly for leisure purposes. At Teesside this had reduced to about 25% (TVCA report p.19).  So, the scope for growth is all in the leisure passenger market.

A second key factor is what is known as ‘propensity to fly’, which is the average number of flights people take each year.  Currently, for the UK, this is 3.5.  Adjusting for regional differences in income, the figure for the Tees Valley is expected to be 25% lower than that.  In fact, it is 40% lower.  The TVCA report uses this as an indication that there is growth potential in the market, but it does not attempt to pinpoint the reasons for this discrepancy.  The Tees Valley Monitor, on the other, leaves no stone unturned.  But first, we need to understand ICF’s forecast for the airport.

It presents three, strikingly different scenarios and estimates passenger numbers for each one.  If the airport maintains its current performance, ICF estimates it will be handling 164,000 passengers p.a. by 2026.  If it develops regional connections and seasonal charters (like TUI) it can expect to be handling 372,000 passengers a year by 2026.  Still nowhere near the 900,000 it achieved in 2006.  In the third scenario, the airport attracts a low cost carrier (LCC) (as it had until 2009), and passenger numbers of 1.5 million become a possibility (and with that, in their view, financial viability).

The difference in outcomes here is staggering. While ICF is optimistic about the possibility of increasing regional connectivity within the UK, and of attracting charters and rekindling summer season traffic, the impact of this on the airport is minute in comparison with attracting a LCC.

There are a few issues with attracting a LCC, it has to be said; issues that are discussed in the ICF report, but not repeated in the TVCA business plan.  A LCC would have to use Teesside as a base, which may involve abandoning a base at another regional airport. ICF considers that Jet2, based at Leeds Bradford is unlikely to want to take on the associated risks of moving.  At present the LCC market is dominated by Ryanair, which operates both from Leeds Bradford and from Newcastle.  While it may be prepared to operate from Teesside as well, ICF observes that it already has already captured  the Tees Valley market via those other two airports and so may consider adding Teesside Airport to their portfolio as unnecessary.

That leaves Doncaster Sheffield, where “[t]he largest carrier is Wizz, which serves the Eastern and Central European markets, serving city-breaks and the “visiting friends and relatives” (VFR) markets.” (p18)  Hungarian airlineHHICF considers it unlikely that Wizz would move from its current base. The reason for this is important – there is a ready market in South Yorkshire that is lacking in the North East.

During the years of economic decline in the North East, there was less inward migration here than elsewhere in the country. Figures from The Migration Observatory show that immigration into the North East was considerably less than any other region of the UK, and, in particular, migration of people from EU members states . It states that total migration to the region from EU member states was just 60,000.  Of the English regions, the next lowest was Yorkshire and the Humber with 236,000.  This, in turn, impacts on the amount of travel in and out of the region:

“At the same time, migration has led directly and indirectly to significant growth in tourism to both origin and destination countries through increased visibility, especially in the ‘Visiting Friends and Relatives’ (VFR) sector, and to the development of new tourism infrastructure and transport routes in and between countries.”

How important is this ‘VFR sector’ to the LCCs?  Ryanair currently operates seven services out of Newcastle Airport.  Of these, two are to Eastern Europe.  At Leeds Bradford it is five out of ten destinations.  So even where migrant populations are small, their impact on a region’s ‘propensity to fly’ is significant.

The North East has attracted little inward migration because its economy has been flatlining for years, and economic migrants are attracted to regions where there is opportunity.  But economic opportunity in this region is on the move. The government is committed to ‘levelling up’ and the Tees Valley, at least, has a metro mayor who is focussed on bringing jobs and prosperity.

The question is, when economic revival comes to the Tees Valley, will inward migration come with it, as it does elsewhere, as help to secure the airport’s future?  That may prove a difficult conversation for Ben Houchen to have with his electorate.  The migrants who help to secure the viability of Doncaster Sheffield are, after all, the product of what he likes to call ‘the failed European project’  .  Since 2017, migration from EU member states has plummeted across the UK, so inward migration is unlikely to come from those regions currently being served by LCCs.  If there is no migration, then the airport is unlikely to be able to generate enough business to attract a LCC at all, and if the migration is from elsewhere, the VFR travel will not be via short haul flights, and so will exclude Teesside.

Houchen has been a leading proponent of the opportunities that Brexit will bring to this region. But the airport project is clearly undermined by it. It appears to be a case of Houchen’s policy heading in one direction, his politics heading in another, and the airport left floundering in the middle.