A protest in London against the Policing BIll led by the Green Party. 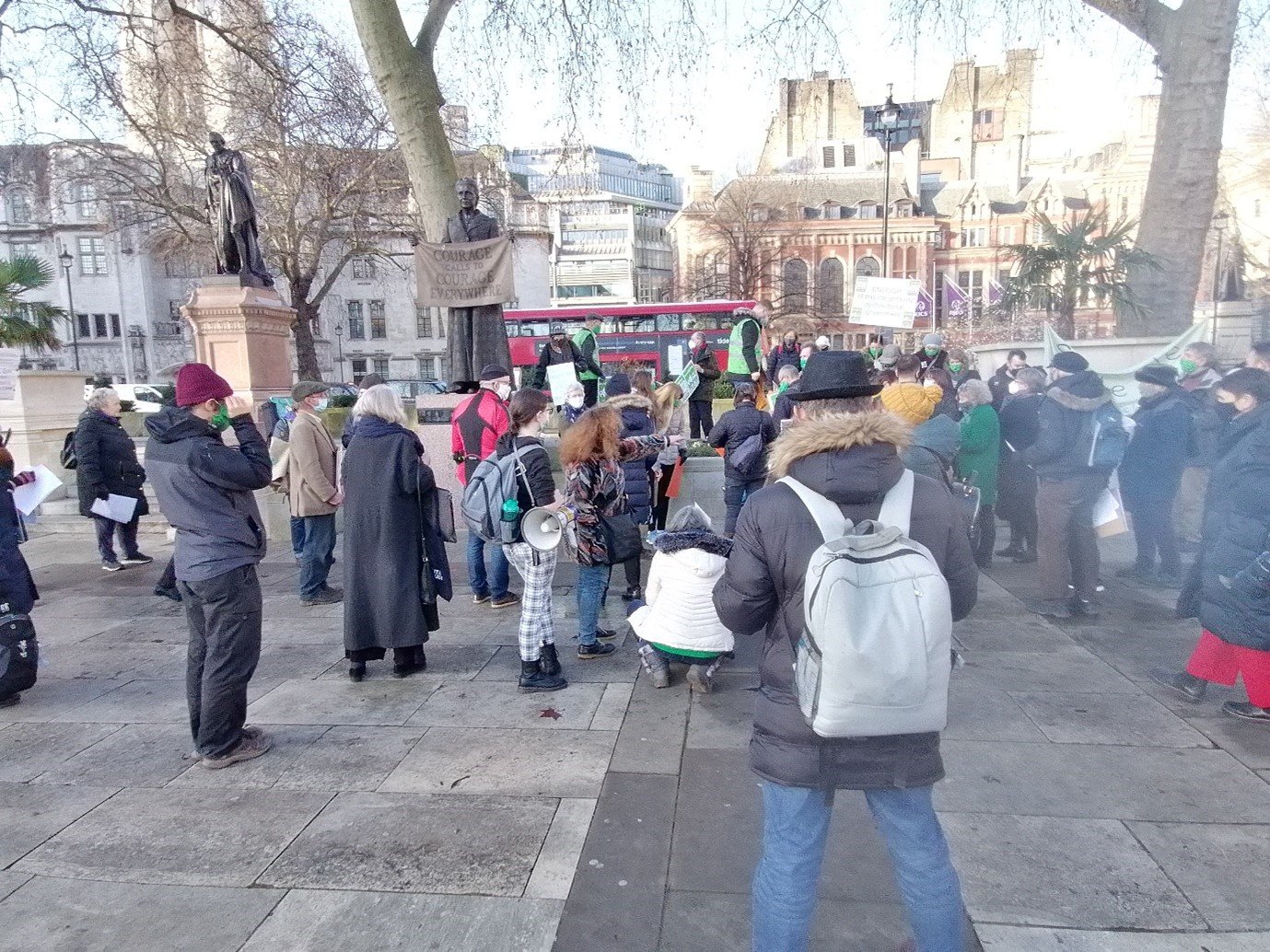 Last Wednesday, on a cold and still misty January morning, a group of protestors gathered outside the statue of Millicent Fawcett, a suffragist. Her statue and memorial can be found in the far corner of Parliament Square, close to other human rights giants such as Mahatma Gandhi.

As a suffragist, Millicent headed the organisation that supported the activities of the suffragettes over 50 years, which achieved the objective of women getting the vote. The protest last week was organised by the Green Party as a protest to the Policing Bill.

The Fawcett memorial was a fitting gathering place. When Millicent had started her work in 1879 it must have seemed that they had a mountain to climb. The call for courage is still very moving! Hopefully it will not take 50 years to get the wretched laws currently passing through Parliament repealed.

The group processed past the Gandhi and Mandela statues, round the edge of Parliament Square, past the House of Lords, and on to the nearby memorial to Emmeline Pankhurst, perhaps the most significant of the suffragettes. By now, the warmth of the sun could be felt, and the group of about 100 protestors listened to some very moving speeches on the subject of the Policing Bill and the Asylum Seekers bill. I counted three significant deviations from International Law: the rights to claim refugee status, the rights to protest, and the rights to be a traveller.

The sun shone as Emily looked down on the protestors as three main speakers (the Green MP, and the two Green Lords) made their speeches. It was fitting that all this was happening in front of the impressive House of Lords building, because the rest of the Lords were debating the bill inside. The lateness of the amendments to the bill was such that they could be voted down and out by the Lords, if they so wished. The purpose of this group was to bring public attention to the bill, which was increasingly difficult with the #Partygate scandal in full swing.

It didn’t end there, however. National and International press had found their way to the Pankhurst memorial as well. Other interviews took place and many more pictures were taken, before the group dispersed, to spread the word.

Thanks to Baroness Jenny Jones, Baroness Natalie Bennett, and Caroline Lucas, for organising such a dignified protest in a most appropriate location. I was reminded at a protest in Bristol three days later that all human rights (including of course votes for women) have been fought for and that giving away any of those rights was appalling almost beyond belief! The appalling aspects of the bill and amendments are explained clearly in another North East Bylines article.

There is another vigil tomorrow morning at the Millicent Fawcett statue in Parliament Square.

Full of sound and fury, signifying something...