For several times within the past five weeks, lively protests have taken place at Monument in Newcastle. 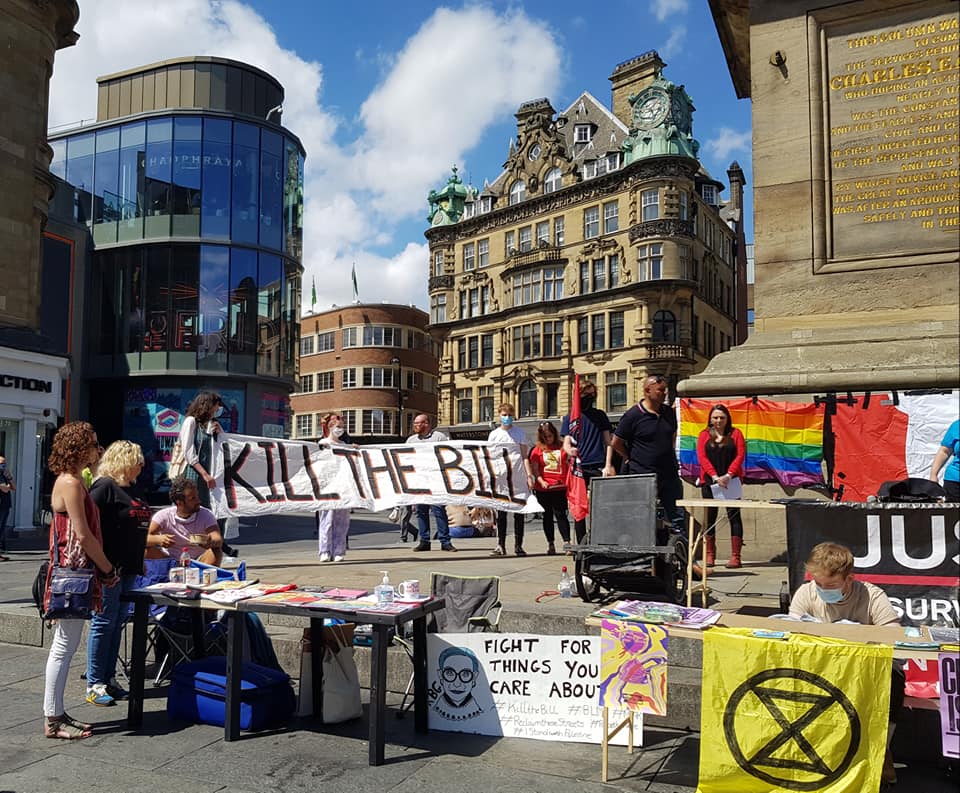 Photo by a protestor Used with permission

For several times within the past five weeks, lively protests have taken place at Monument in Newcastle.  A continuation of ongoing assemblies around the country, these protests are seen by the attendees as vital within both holding the government to account and for challenging exploitation and injustices both domestically and internationally.  They are also viewed as something that will be seriously undermined if the Police, Crime, Sentencing and Courts Bill, making its way currently through Parliament, goes unchallenged.

A wide array of groups protesting

A large number of attendees have emerged both on an individual basis and from a variety of groups, including anti racist groups, housing activists and tenants’ rights organisations. They also include climate change activists, feminists, LBGT+ and Transgender rights groups, and individuals and activists from the Traveller community. In addition there are people from trade unions, human and civil rights bodies, Leftist, Socialist, anarchist and grassroots’ workers organisations and Palestine and Colombia solidarity campaigns.  This reflects current campaigns and the concern of a wide array of groups and individuals to the potential draconian effects of the bill.

Arrests on May Day

An impressive turnout on May Day was accompanied by a march to Haymarket to draw attention to ongoing struggles, causes, and the policing bill.  For chalking slogans (later quickly cleaned off) on Grey’s statue at Monument, and for sitting in the street, 17 people were arrested.  The police have apparently stated that such incidents would provoke the far right, who perhaps mirroring more official declarations, appear fixated on “defending statues”.

The protestors answered this by asking why tiny reactionary nationalist groups should get to set out what is and isn’t acceptable in any democracy?  The protestors also pointed to such actions by the police as likely to become more commonplace if the bill becomes law, with courts then potentially handing out lengthy prison sentences for ill defined “disruption”, “nuisance causing”, and damage to stone artefacts (even if very temporary).

Further protests about the policing bill

Following on from these incidents, determined protests have again taken place twice already, including on Sunday, the anniversary of the first mass protest in the North East, following on from the murder of George Floyd.  On a warm day, energetic speeches, poetry and singing performances took place –including by members of North East Against Racism, Black Lives Matter, Extinction Rebellion, Unison grassroots members, human rights activists, FRFI, Palestine and Colombia Solidarity Campaigns, Socialist Think Tank, and the Northumbria Branch of the Industrial Workers of the World (IWW) member led union.

The speeches discussed: the tragic consequences of the continuation of racism and sexism in society, particularly in bodies of authority, and the movements aiming to tackle this; the severe challenge facing humanity, especially in poorer communities around the world, by inaction on climate change; the struggles around the world for social justice, including in Colombia and Palestine; the plight of migrants and campaigns against detention centres; the fact that Pride is meant to promote equality and liberation and be a protest, not simply a corporate friendly exercise; the continued and intensifying exploitation of workers locally and around the world, and what can be done to confront this; policing attitudes and actions both nationally and internationally; the overarching problem the current system presents for obtaining justice and a decent fulfilling life, with ways to challenge this.

A recurrent theme running through all the speeches and protestors concerns was the chilling effect that the current policing bill could have on the potential for necessary change close to home and for solidarity internationally.  However, they also articulated a loud determination to not back down in the face of this bill and to continue their struggles and protests, whilst pointing to the crucial importance of those at the grassroots for effecting real positive changes in society.  Further protests and actions are being planned.