The problem isn't Mrs Windsor. The problem is that the UK is a constitutional train wreck, and if the modern orthodoxy of the monarch staying out of things continues - and it probably has to - then not only does the monarch serve no purpose, but there is also a significant deficit in our body politic as those duties and powers nominally maintained by the monarch are exercised by no one. 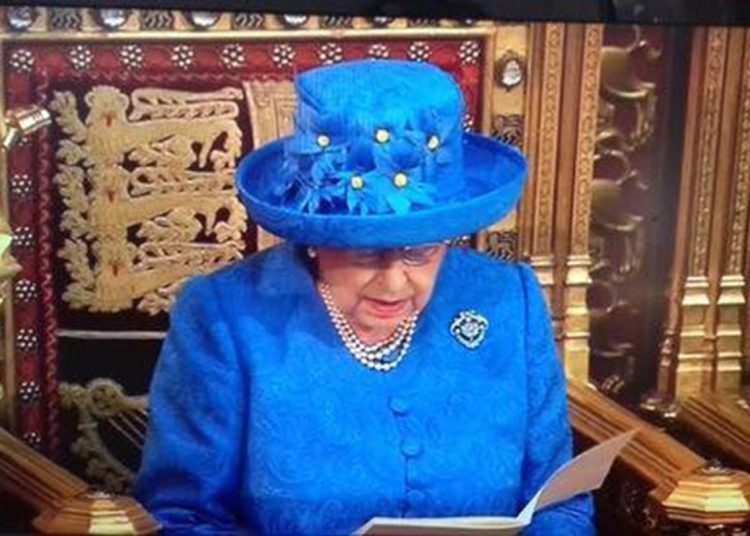 The queen wearing a hat which is similar to the EU flag, Screenshot from facebook

I was born in 1970. This weekend is the fourth Queen’s Jubilee I have seen.

But it’s the first that sees me a republican.

The problem is the institution.

Now, you might wonder how I could get to my 50s before I have a problem with the monarchy. Surely such an anti-establishment bent would be expected to emerge in one’s rebellious teens or early 20s, but the fact is, I’m a pretty easy going guy. Sure, having a monarch is archaic, but the alternative, a president, has its drawbacks too. I’ve never been a royalist as such, and a royal family is a bit silly, but people seem to like it, so, hey, fine. Could do without the Nick Witchell bits, but otherwise, fine.

The problem is what has happened to this country in the last ten years, ten years that has seen a rise of fascism in the shape of Farage and co, and then, crucially, the Tory party’s decision to flirt with the joys of fascism, ride that pony for a bit, and – Oh dear! It’s got the whip. The Tory party became the pony on which fascism triumphantly rode on in. Churchill’s grave really ought to be tapped for the national grid at this point, that ought to be a very ecologically sound and powerful dynamo right now.

Brexit and the pandemic

None of this is the Queen’s fault. It is very definitely the Conservative Party’s fault. In the UK we’ve always had a fascist fringe, but most countries do, and they are just a fringe. Until, that is, the big flirt with fascism allowed them to leverage a major party and delivered a Brexit that promised the moon on a stick, but is clearly failing to deliver on a catastrophic scale. And whilst no one could have predicted a pandemic would emerge just now (I mean, ask any scientist in the field, and they’ll tell you they knew one would come eventually, but no one could have predicted it would be just right now), it meant that a cabal of staggeringly clueless, Russian bank-rolled, pound-shop ideologues with one trick between them (get Brexit done) were in charge when a pandemic hit.

The conflation of towering idiocy and self-serving malignancy that had them send the infected into care homes, killing thousands, whilst farming out contracts for medical equipment to mates and donors who usually imported jewelry or ran pubs, could hardly have been predicted by us, because the vast majority of us are normal people to whom such mendacity would never, ever occur.

Brave medics are dead as a direct consequence of these shenanigans.

Integrity is under threat

The integrity of the United Kingdom is now under threat. Ireland and Scotland are itching to leave, and for many of them (and they’ve likely tipped the balance) it’s just to escape the madness of Brexit consequences. There’s even a surge of such feeling in Wales. Again, it’s all because of a Tory party that decided to make Brexit the hill it would die on, with no regard for what damage they might do, the billions they would burn, the people they would kill. The Conservative Party reels from constitutional crisis to fatal incompetence to law-breaking debacle like a drunken pirate on an ice rink – and there’s nothing to constrain them.

But why isn’t there anything to constrain them?

It’s because of two factors – our constitution is uncodified, which I go into further here, and then because the source of authority external to the executive declines to assert itself. I mean, of course, the crown, in the person of Queen Elizabeth II.

Now, there are sound arguments for why a constitutional monarch does not interfere with democracy, but there can be extraordinary circumstances, and there are precedents. King Juan Carlos of Spain effectively declared a coup invalid in 1981, and that proved to be the end of that. Indeed, the Queen has form in such interjections, or rather, her Governor General of Australia – who exercises her prerogative powers on her behalf – did in the 1975 Dismissal.

The notion that the crown is strictly decorative these days is not correct. There are prerogative powers. So, I grant that a monarch calling the shots willy-nilly is fatal to democracy, but, nevertheless, these powers are there. Why are they even there?

The answer is that these islands have gone first, we’ve been the prototype for many of the democracies we see in the world. This means, like a good prototype, we’ve made all the mistakes first. And, because precedent is part of how we’ve done this, some of those mistakes are baked in.

Magna Carta made the first chip against absolute monarchy, and by the time of Henry VIII he was very careful to get lawyers in before seizing your land or cutting your head off (the lawyers never failed to seize your land or cut your head off, but the niceties were observed). Talking of which, this ridiculous nonsense we sometimes hear about “well, you see, Britain never had a revolution….”. Of course we did! We had a king who wanted it to work over here the way it did for Louis XIII, an absolute monarch, but we (under Cromwell) weren’t ‘avin it, so we cut off his head and did without a king for a bit. If chopping off the king’s head ain’t your idea of a revolution, I don’t know what is. But, of course, forward-thrusting trend-setters that we were, we hadn’t yet thought about what you do after your king lies in bits on the scaffold. There were no precedents. So we got his son back about a decade later, pretty much just because no one had a better idea.

There would then be a hundred years for people to think about just exactly what you might do instead of a king, so that when the American, and then the French, revolutions tried it, they had some ideas. By then, however, we in the UK had gone cold on the regicide schtick.

It must not be forgotten, however, that when we plonked Charles II on the throne, it was on very different terms to those his father knew when he ascended. Nevertheless, a king is a king, it was the 17th century, and prerogatives yet sustained. They may have been whittled away over the centuries since, but, even now, some traces yet remain. And are, occasionally used.

There is another difficulty that comes from that same mish mash of historical development – we don’t have a true separation of powers. Both judiciary and executive are part of the parliament. So, they’re supposed, according to modern theorists, to hold each other to account, and I’m not saying they don’t, but it’s a bit of mess, and in many circumstances they fail to do so adequately. This means that the occasional interjection of the crown has been quite useful. And we’ll never know how much was done behind closed doors. But, with the modern orthodoxy that the crown should not interject, there is a real problem – you might not like it that that crown intervenes, but sometimes someone needs to intervene.

But if not the crown, then who? The Queen’s gambit appears to be that if she withdraws from the fray the institution of the monarchy will survive. But Parliament is currently effectively suborned, and the judiciary only get involved on very specific terms. If the Queen absents herself, democracy is not better served, at least not until such powers as she might have are transferred elsewhere. They can’t just be not used. They’re there for a reason.

In our system, the monarch absenting the field often leaves no other champion. Parliament is useless when the executive apportions patronage whilst enjoying so large a majority. For the judiciary to be activated usually requires that that someone actually bring a case, as Gina Miller did regarding the executive’s attempt to circumvent parliament over Brexit. Until a case is brought, the judiciary are (usually) not in the game – and this executive has undermined our judiciary quite comprehensively this last decade. Almost no one can afford recourse to the law in the UK.

The monarch should not absent the field

So, I would argue, the monarch ought not to absent the field when there’s no one else able to do those jobs.

But that orthodoxy that the monarch must absent the field has triumphed, without anyone worrying about who else might do the job of occasionally kicking up a bit. We now have a rogue and unfettered executive that flouts the law, is removing our constitutional rights, and undermines both parliament and judiciary. And the Queen just watches.

It’s perfectly possible that the queen intended to give a signal that time she wore an ensemble suspiciously reminiscent of the Council of Europe flag. If you did, Ma’am, thanks. But that was not enough. We needed more. Your country is being driven to poverty for many, nasty instincts are being stoked in the uneducated and marginalized, and the constitution is being ripped from under us. So the reason I’m a republican now is not, as it is for many, that I fear that the Queen might use her prerogative power.

It’s because she declines to use it.

We now need a codified constitution that actually fetters the executive. Or we’ll end up with something perilously close to Charles I’s absolutist wet dream after all.