The South Sea Bubble scandal: is it relevant in today’s politics?

Can we set a further precedent for unlawful conduct by those in government roles? 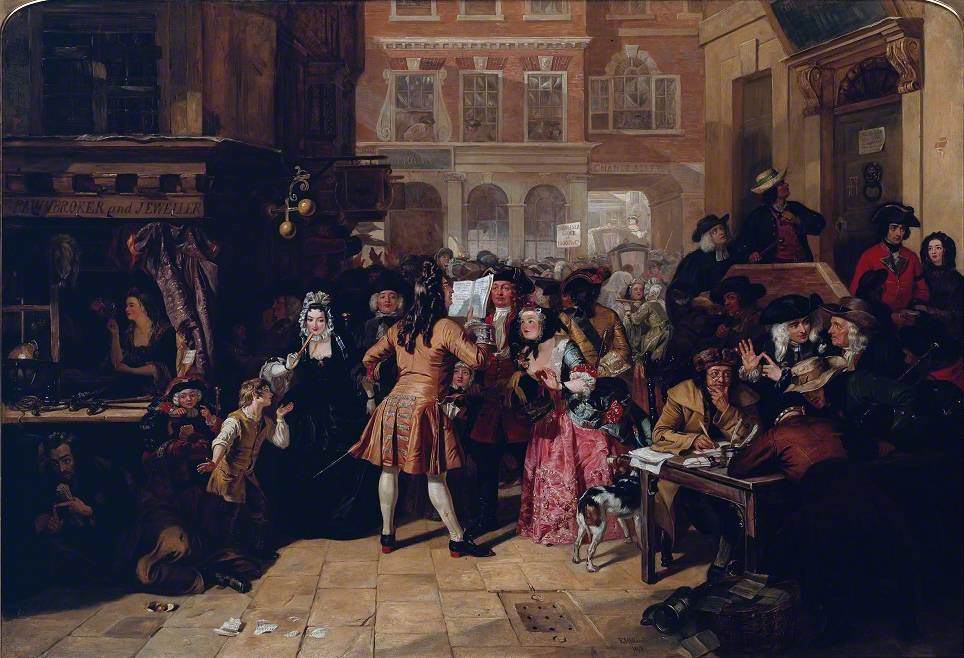 Ward, Edward Matthew; The South Sea Bubble, a Scene in 'Change Alley in 1720; via wikimedia commons

The South Sea Bubble scandal was set up by Britain’s leading financial institutions and Members of Parliament a little over three centuries ago, and ruined many investors, leaving many in penury and poverty, and great public outrage. This is the story and how it is relevant to the present day.

In London, 1711, Edward Harley and John Blunt formed the South Seas Company to engage in the slave trade, supplying a little under 5,000 African and Caribbean slaves a year to Spanish plantations in Central and Southern America, the slaves proving sturdier stock to replace the indigenous populations wiped out by diseases imported by their European oppressors.

The company worked with another slave dealing outfit, the Royal African Company, and trade was so good and profitable, the company’s profile rose, and even the UK’s King George I became a director. Paterson mooted the plan to open the company up to even greater numbers of investors with its profits used to bail out debts mounted during war with the Spanish, on the basis that a peace treaty with the Spanish would only see slave trade boom all the more. The company’s stock value soared, shares were sold to everyone and anyone (excluding the very poor) at low prices, the confusing small print being ignored if considered at all as punters rushed to cash in.

Even though the post-war treaty of Utrecht sold the British slave traders a very poor deal, investors still piled on, the firm leveraging its assets to borrow more money, at up to 100% interest, to purchase more investments, raising its profile and drawing more suckers in to what was now a bubble.

Which duly burst in 1720. The shares became irredeemable, and even banks and goldsmiths that had invested began to suffer and fail due to their inability to call back loans made from stock. Many of the claims made to investors, who by then were losing money hand over fist, were now considered to be fraudulent,– suffice for Parliament to be recalled in December 1720 due to deal with the crisis and outrage.

Subsequent investigations uncovered widespread fraud and corruption amongst the company’s directors among whom were listed luminaries of the government Cabinet: the Chancellor of the Exchequer, John Aislabie, the Postmaster General, James Craggs the Elder, the Southern Secretary of State James Craggs the Younger (keeping it all in the family), and even Lords James Stanhope and Charles Spencer (the heads of the Ministry) were implicated. The Commons found Aislabie guilty of the “most notorious, dangerous and infamous corruption” and had him jailed. Both of the Craggs died in disgrace, whilst the others were impeached for their conduct.

Robert Walpole took the helm as the new First Lord of the Treasury, and sought to restore public confidence in the financial system – but he would have to deal with the consequences of the scandal, and those who had lost money wanted revenge. Consequently, Walpole undertook to remove 82% of the company’s assets to compensate victims. South Sea stock was divided between the Bank of England and the East India Company. Although this put satisfied a good number of investors, Walpole in the process exculpated King George and his mistress from any further inquiry – they two were embroiled, as were three other government officials that Walpole contrived to spare impeachment.

Nonetheless, others had been judged, damned, gaoled – the precedent set for Members of Parliament being successfully prosecuted for misleading and benefitting financially from their positions. Those holding senior public office are not immune from prosecution for the misconduct they commit in such office.

And by that we can ask: is this not dissimilar to what is happening today here in the U.K? Do we have a case in the UK where profits made from Brexit affecting the value of the pound conflict with their roles in office? Would it include contracts with companies which produced defective PPE? Would this include herd immunity where senior governmental staff displayed indifference to the deaths of what they wrote off as ‘a few old people’ and placed them, everyone in fact, in dangerous situations? How does that sit with the rights of vulnerable individuals under the European Convention on Human Rights article 2, which states that everyone has the right to life and not be killed by someone else?

This article clearly means that the state must protect human life by enforcing the law, protecting those in danger and safeguard against accidental deaths. Today can we set a further precedent for unlawful conduct by those in government roles?