The Transporter Bridge: past and future

With Tees Valley's bid for 2025 City of Culture now abandoned, it seems that local heritage has a low priority and the future of the Old Lady of the Tees remains uncertain. 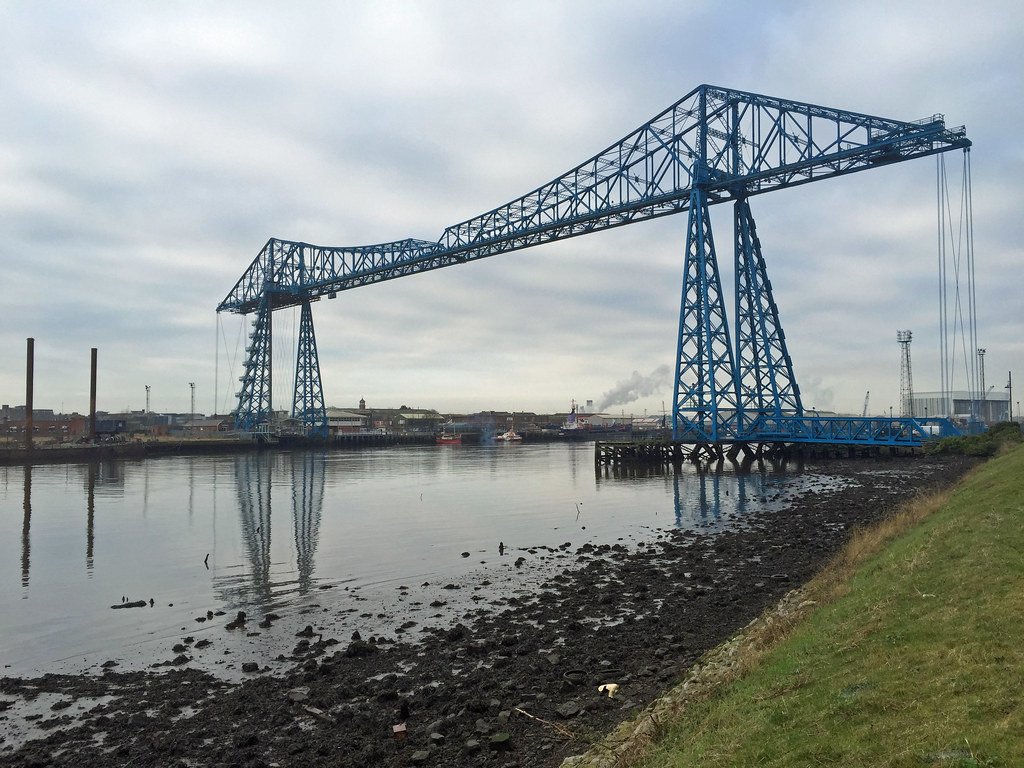 The Transporter Bridge, that monument to Middlesbrough’s iron age,  is 110 years old in October and its age is beginning to show. The unique Grade II* listed structure received a Risk of Death notice in 2019 and has been closed ever since.

At the time of its construction in 1911 the bridge provided a vital link across the River Tees between the young Middlesbrough and County Durham.

On the Durham side sat Port Clarence, originally a coal depot, later joined by the Bells Brothers blast furnace which processed iron. It was also an industrial village, home to Irish refugees from the Potato Famine of 1845-52 who settled there for the ready work.

Before the Transporter was built, the townsfolk relied on ferries to cross the river. But the ferrymen did not cater for late-night revellers from Port Clarence, as a drowning in 1855 shows. (Glasgow Herald 1 August 1855)

Bartley Monaghan had just welcomed his baby son John to the world. The Monaghans were originally stonemasons from Kildress in County Tyrone and like many other Port Clarence residents, Bartley worked as a labourer at the Bells works.

It was 22 July 1855. To bless baby John’s head after the christening, Bartley and some friends crossed the Tees to Middlesbrough for a night out in the town’s pubs. But returning to the shore at 11 pm, they realised they had missed the last ferry boat and the ferrymen had gone home. They found a small boat on the shore and piled in.

After launching onto the river they realised that the oars were locked and they had only a piece of wood for a scull. Trying to free the oars, one of the party accidentally kicked a hole in the craft which rapidly took in water. Husband and wife Patrick and Mary Gavan were seen holding on to each other as they floated downstream before they sank. The three remaining men –  Bartley, Patrick O’Neil and Michael Carroll –  clung to the upturned hull. They drifted away in the current and only one reached land, surviving to tell the tale.

The drowning made the national newspapers, but with the passage of time the story was lost, to be rediscovered by genealogist Michael Burns to whom I owe a debt of thanks.

The idea of building a bridge at the site was first floated in 1858 but it wasn’t until 1901 that the scheme was seriously considered.  An Act of Parliament was passed on 4 July 1907 to erect the Transporter. (Middlesbrough As It Was by Norman Moorsom 1976)

Opened by Queen Victoria’s grandson. Prince Arthur of Connaught on 17 October 1911, the bridge is 259 metres long with a span of 176 metres over the water and supporting pillars 69 metres high.

A transporter carries people and cars on a platform ‘gondola’  that moves between the two towers. The Tees structure is the longest surviving transporter in the world.

There’s no great reason to cross the Tees at this point now. The Bells works are long gone. Little is left of Port Clarence –  most of the settlement was demolished as the atmosphere proved to be too polluted to raise a child in. And there’s the Newport Bridge nearby.

In 2011 the Heritage Lottery marked the bridge’s centenary with a £2.6 million award for a refurbishment. To make this icon more of a tourist attraction a glass lift to the upper walkway was installed for guided tours.

But the future of this wonder of the northern world is in peril. Following a whistleblower report in 2019 an investigation by Middlesbrough Council’s internal auditors found  “mostly ineffective and passive” management of the bridge over the previous decade.

In late 2019 a survey by Atkins engineers found that the bridge was a death trap. It was given a “Risk of Death” notice and closed.

In January 2020 Stockton and Middlesbrough Councils agreed to split the bill of £650,000 for emergency works which were carried out in June last year.

A Transporter Task Force was established to examine all the alternative options for the iconic landmark.

A public consultation took place earlier this year and the ideas gathered are now being assessed. The local sentiment is strong for making the bridge fully operational again.

A complete renovation will cost around £7 million over the next decade and the question being asked is, how will the work be financed? Middlesbrough has just hit the jackpot twice over with the Towns Fund of £21.9 million and the Future High Streets fund of £14.1 million.

Relaunched as a heritage asset and tourist attraction, a fully refurbished Transporter should fit the bill for urban regeneration. But the windfall money was already allocated before the scale of the Transporter’s problems were known. Instead, a variety of property developments in the centre of Middlesbrough are welcomed by Independent Mayor Andy Preston, who is by trade a property developer.

Now is not a happy chapter in the story of Tees Valley’s industrial landmarks. The Redcar Blast Furnace was demolished in August. The Dorman Long Tower is planned to be blown up this month. Both located at the old ISS steel plant, they are casualties of Tees Valley Mayor Ben Houchen’s plan to completely clear the site for hoped-for investors.

With Tees Valley’s bid for 2025 City of Culture now abandoned, it seems that local heritage has a low priority and the future of the Old Lady of the Tees remains uncertain.