Molly Moselle is said to haunt Sunderland Empire Theatre. Peter Lathan takes a look at her life and story. 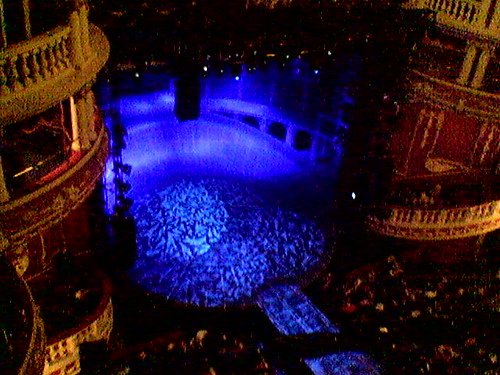 Molly Moselle (that was her stage name; her real name as Mary Burslem) was a dancer but, like most people in theatre then and now, she couldn’t always find get a performing job and was forced to take on other work, so in January 1949 she was an ASM (Assistant Stage Manager) on a touring production of Ivor Novello’s The Dancing Years at Sunderland Empire. She was 33 years old.

On 14 January she left her digs in Eden Street, one of the warren of streets behind the theatre (almost all of which are now gone), and she was variously reported as telling her landlady she was going out to post a letter or to buy a birthday card for the show’s leading man, Barry Sinclair.

She was seen by one of the Empire’s dressers, Tom Kershaw, from the window of his flat as she turned into an alleyway which led to Garden Place (the road which runs along the side of the Empire and now gives its name to the Garden Place Bistro in the theatre). She was, he said, brightly dressed in an orange jacket and orange slacks.

That was the last time she was seen.

The police launched an investigation which turned into a national search, with enquiries carried out in her home city, Liverpool, in London and in Sheffield as well as at railway stations throughout the country. All possibilities, including suicide, were considered, but nothing was ever found.

Troubled is probably the best word to describe her love-life. Just a few months before these events her 16-year relationship with comedian and panto dame Bunny Doyle, who was 54 and married, had come to an end. She then took up with a Sheffield hotel owner Walter Hattersley, who, it is said, was also much older than her – and he, too, was married. She claimed he had bought her a £200 engagement ring which she couldn’t wear because it was “too valuable.”

Nothing was heard of Molly for more than 20 years and then, on 12 October, 1961, a police launch on the River Wear found a rotting torso with part of one leg attached. It was assumed that the body had been buried in a shallow grave and had been washed into the river by recent heavy rains. At the inquest it was revealed that it was the body of a woman between 25 and 50 years old who had been dead for a long time. It was estimated that she was about 5ft 3 inches tall and the suggestion was made that it might be the body of Molly Moselle (who was 5ft 6), although that would be impossible to prove. This was, of course, long before DNA testing.

Molly, it is said, haunts the Empire. When the story was first spoken of, I don’t know, but I do know that it was a firmly held belief among the staff that she walked the theatre when I started working there about 1968.

Imagine an empty theatre the size of the Empire, seating 2,000 in the stalls, dress circle and boxes, upper circle and gallery, in almost total darkness with the ghost light – the single bulb left burning on the stage of an otherwise dark theatre – sending very little illumination into the vastness. It is, I can assure you, very creepy, with half-heard sounds, real or imagined, sending shivers up and down your spine.

Imagination? Possibly, but too many people who are not given to imaginative flights of fancy claim to have seen a ghostly figure.

But is it Molly? Who knows?