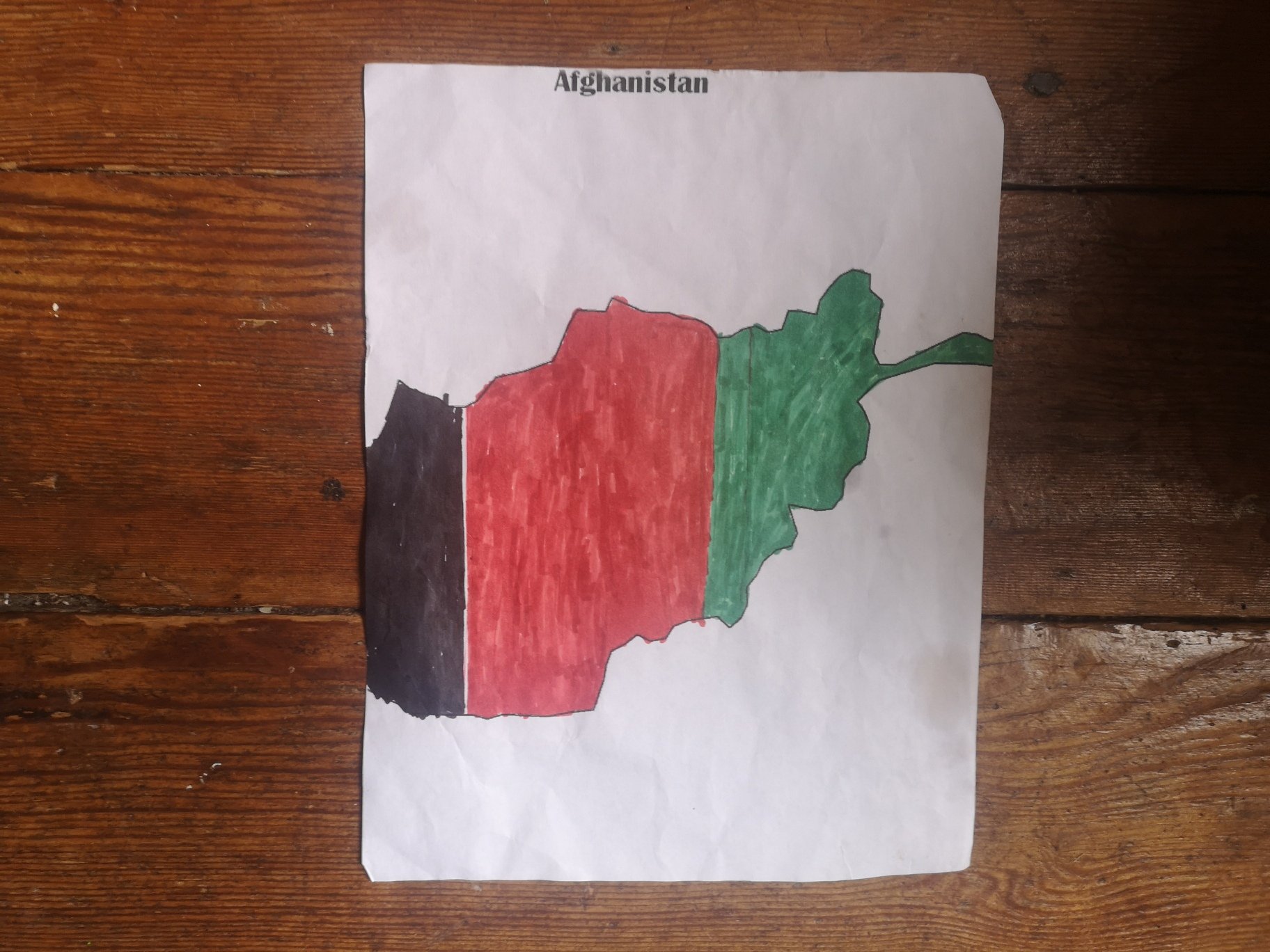 Flag of Afghanistan drawn and given by a child

A couple of weeks ago I wrote this article.

In my poem, I addressed violence against women and girls. The seventh stanza is, sadly, more pertinent than ever in the light of recent events in Afghanistan. I had been thinking about Afghanistan and Nigeria at the time of writing, but never dreamt, like the rest of the world, that Afghanistan would fall back into the hands of the Taliban so quickly, undoing twenty years of progress. Like all of us, I could only look on, feeling helpless and traumatised. Yet again, women and girls are already being murdered for not wearing the burqa and raped as child ‘brides’.

Last Wednesday I travelled to Parliament Square to protest against our government and their lies. There was also an Afghan protest.  The plight of Afghans, especially that of the women and children, makes my worries pale into insignificance. I spent a couple of hours sitting with and talking to Afghan women, beautifully adorned in a mixture of traditional dress, much of it brightly coloured, and playing with their children. They were all residents here. They are intelligent, brave, and articulate. Some work as doctors and nurses in our health service. They pay tax. They love their homeland, their birth land. They love Britain too, and their children were born here and have dual nationality. One had a baby girl, who was born in lockdown.

No faith in the Taliban

These strong, independent women are desperate, afraid, and heartbroken. They have harrowing stories to tell about their relatives and what is really happening on the ground, particularly in the provinces outside Kabul. They have no faith in the Taliban, and already women are being shot in towns for stepping into the street without wearing a full burqa. Girls have also been taken as ‘brides’ for their soldiers. Not one Afghani, man or woman, was untouched by personal stories of deaths back at home. The Taliban are still very frightening people – the leopard does not change his spots just like that. Make no mistake, the so-called withdrawal has been handled totally inadequately by the US and the UK.

Considering we British have spent twenty years in Afghanistan, we should be giving sanctuary and refuge to anyone wishing to flee. These terrified people, who are appearing daily on our screens, could well be the same smiling women and children we have seen pictured so often alongside our soldiers, who feel utterly betrayed by this government. These people need help NOW, not months down the line.

The response of our Prime Minister and Foreign Secretary, himself the son of a Czech Jewish immigrant, beggars belief. Their complacency typifies the government’s response. That either of them should be on holiday at a time of crisis, largely of our making, is a disgrace.  Home Secretary Patel’s pontificating and spurious justification for her intended actions is as heartless as ever. Yet she too is the daughter of Ugandan migrants.

Now is not the time for bureaucratic processes, or the enforcement of rules and legal barriers to coming to Britain. Now is a time only for compassion. On Wednesday, my newfound Afghan-women friends were telling me how they felt there was no humanity: that those in need were regarded as of lesser worth than chickens, than animals. Under the Taliban, women have less status than four-year-old boys. They want only to be seen and treated as fellow human beings. Only when these people, whom we have rightly or wrongly made our responsibility, have sanctuary, only then should we seek to ‘process’ them.

Since Wednesday, I have been in contact with two of the women that I met. I was hoping that I could give you the story of one, in her own words, but this is not possible: she is traumatised. She has lived in England for many years and her grandchildren have been born here. She was a gynaecologist in Afghanistan and came over with many of her family to escape the regime. She does, however, still have a son and grandchildren in Kabul.

Over the last few days, we have heard so many harrowing stories in the media and from people we may know. My friend, who I will not name here, is just another desperate human being. Here are two of her messages to me. I have taken the liberty of clarifying her English, but only a little:

“Hello my dear Nicola, how are you? I hope everything is good with you.  You remember me yesterday. We met in front of Parliament. I want to go in Parliament about my son’s problem. I am so sad about my family. Specially my son and my two sweetie grandchildren and daughter-in-law. They are crying and calling me. At the moment I have biggest problems and tension. So that is not easy [referring to giving me her story] … Difficult. Please could you help. My thanks. Bye bye, love you.”

Then on Saturday came this response to a message, in which I asked about her family and told her I’d written to my MP and wanted to write this article.

“Thanks my dear Nicola. Thanks again for your nice message. I translated your message to my language because my English isn’t good, I understand your nice message. At this time, me and all of family about the situation. About my son and grandchildren. So I want someone to help me about my biggest problem today. I don’t have eating and drinking properly. This week my crying, and big tension was my food and drink. All night I wasn’t sleep so my back problems also going up, God help us. I lost my way until my son stay in this country. I have a big, big tension.  Hope you know my message. Thanks for your love.”

Thousands with stories to tell

I of course replied, sending her my love and best wishes, but I felt it was wrong to pressure her to write her story in her own words. She is just one of thousands of men and women with stories to tell. Just another voice. Even though we are hearing these stories every day now, I make no apology for telling hers here.

Yes, we can donate and give practical support to refugees already here, but we must keep putting pressure on our MPs and the government. Send them these stories. Tell them we are appalled at their inaction, their complacency, their lack of compassion. Protest vociferously. Shame them if we can. I have sent my MP two emails but have yet to receive any response.

We cannot do nothing

To stand by and do nothing is unthinkable. Our protests may seem ineffectual, but our actions will show that we are not simply bystanders, and that we refuse to be complicit in our government’s catastrophic actions.

Last Thursday was Independence Day for Afghanistan. On Wednesday, an Afghan citizen said they would not celebrate this year but instead spend the day together in grief. No dancing, no music. These are dark days. We helped Afghanistan bring back music, dance and kite-flying to its people. Women were flourishing. We must try, somehow, to ensure that the country does not fall back into darkness and silence again. This is what those I spoke with fear the Taliban will do.

Since meeting my Afghan friends last Wednesday, the stories we hear are becoming increasingly horrific. As well as underage girls being given to fighters, rape of boys is also a tactic used to instil fear into communities. We have no right to criticise those who ‘run away: they can then fight another day, if they survive. The bravery of those who are resisting demands our amazement and our admiration.  We must bring comfort and relief to the beautiful Afghan people.

Back to school bungle beggars belief