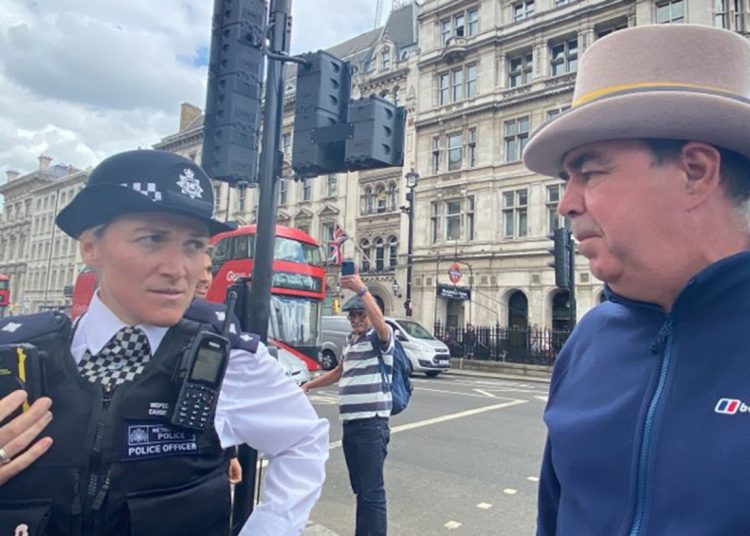 Today Steve Bray, Mr Stop Brexit, had his sound equipment seized by members of the Met Police and received a summons to court. This is due to today being the day when the new Policing Act came into force. The day when “noisy protest” has become illegal.

“They might as well have called it the ‘stop Steve Bray’ law.”

Campaigner, Steve Bray, often known as “Mr Stop Brexit”, has been an active presence outside parliament for six years. His group SODEM (Stand of Defiance European Movement) protested against Brexit for many years. Whilst the focus now is still pro-European, the group has widened its scope to campaign on a range of issues, including against government scandal and dishonesty, for example Partygate and the changes to the Northern Ireland Protocol.

This was echoed by many on twitter today as thousands of people tweeted their support for Steve Bray.

Sam, who used to work in the area tweeted:

“This doesn’t happen in healthy democracies”

Many people felt that what happened to Steve today was both heavy-handed and an affront to democracy, like Emma, who tweeted:

Others wrote about the importance of the right to protest. Jay tweeted:

“Either we’re a free country with the right to protest, however annoying some people find it, or we’re bloody not.”

The symbolism and seriousness of the situation was not lost on many people. This one is somewhat chilling:

There were numerous offers of practical help, including legal and financial support.

There is an active crowdfunder which you can see here.

Tomorrow is another day.

"There is still time to stop this flight": protest against forced deportations of women at 10.30pm tonight