This is Us is a response to the world we live in, making culture more accessible to more people through a programme of work that reflects diverse stories and communities. 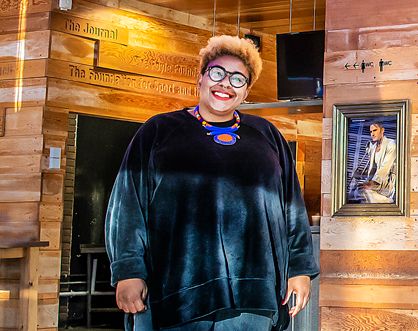 Natalie Ibu became Artistic Director and Joint Chief Executive of Northern Stage less than three months ago. Natalie has had a deep interest in theatre and the community for many years.

“As a 17-year-old Black Scottish working class girl, I decided I wanted to be an artistic director because I longed to work in community – with a team, with artists, with a place and with audiences. Northern Stage is exemplary at this with its commitment to its local and regional community…”

The appointment of Natalie Ibu is a natural fit. Northern Stage believes in the social, emotional, and political power of theatre to challenge the status quo. A spirit of rebellion runs through the work of both Northern Stage and Natalie Ibu. Natalie was previously the Artistic Director of tiata fahodzi (Dec 2004- 2020), the only black-led theatre company in the UK with a sole focus on new work.

Natalie says, “I think it’s fair to say that none of us – me, the organisation, artists and audiences alike – thought I’d be announcing my very first season so soon into the role. But – whilst a surprise twist – it’s provided a brilliant opportunity to hit the ground running, collaborating with artists, with place, with the personal and the political to meet audiences wherever they are and then lead them back to our building when it’s safe to do so.”

This is Us, her inaugural season at Northern Stage is a gritty programme of collaborations, commissions and curated work that celebrates the collective, connection and community.

This is Us is a response to the world we live in, making culture more accessible to more people through a programme of work that reflects diverse stories and communities. It has three strands, designed with enough flexibility built in to allow for adaptions to the latest Covid-19 restrictions: from January. Can We Come In? will take audiences on a journey from their homes, into the city for Out on the Toon from March, and then back into the theatre when it reopens for House warming from April.

Natalie explains, “This is Us is about radical diversity of stories, characters, lives, forms, locations and times to remind us who we are but also reminding audiences about what we do best – facilitating stories that reach beyond the ordinary. It’s about the collective and connection. From tiny stories that provide alternative distractions to doom-scrolling in Scroll, or epic tales on your Smart TV to gather your support bubble around in the comfort of your own home, to using the city as a canvas in Street Art Opera before inviting you to warm our house when we reopen the theatre with a homegrown adaptation of The Invisible Man.”

The first strand of This is Us, Can We Come In? is designed to meet audiences in their homes; a programme of specially commissioned digital micro-stories, plus the very best digital capture of plays, streamed on demand. It launches on 27 January with Scroll, offering audiences an antidote to ‘doom scrolling’ in a series of digital story interventions commissioned by Northern Stage to replace the moments of mindless scrolling with tiny stories about us to be experienced in the moments in-between, e.g. while waiting for the kettle to boil, standing in a queue, or just after turning the morning alarm off. Scroll features new work by Adam Lenson, Bridget Minamore, Chris Sonnex, Daniel Bye, Daniel York Loh, Leo Skilbeck, Tabby Lamb, Sampira and Uproot Productions.

The second strand of This is Us is Out on the Toon.  Here the city will become a canvas, creating cultural experiences for audiences to connect with as they wander through their local streets. Part performance, part installation, Milk Presents’ High Vis  landing on the streets of Newcastle. High queer, high camp and high volume, members of the LGBTQIA+ community will be invited to anonymously record celebratory declarations of queerness in one part of Newcastle and have these broadcast via Milk’s loud and proud hailer on the other side of the city.

Milk’s Executive Producer Ruby Glaskin explains, “The pandemic has forced LGBTQIA+ spaces to close and Pride events to  cancel, leaving the community isolated from each other. With many missing their queer fam High Vis is an opportunity to shout out to Newcastle’s LGBTQIA+ community and also be heard by those who haven’t stopped to listen before.”

The third strand of This is Us, Housewarming will welcome audiences and artists back into the theatre once it’s safe to reopen, starting with a new adaptation of H.G. Wells’ sci-fi classic, The Invisible Manadapted by Phil Correia and directed by Anna Girvan. As with previous productions The War of the Worlds and The Hound of the Baskervilles, The In visible Man is part of Northern Stage’s NORTH programme, offering emerging North East theatre makers an opportunity to gain experience of staging and touring a new production. It will premiere at Northern Stage before touring to rural venues across the North East, restrictions permitting. More shows and new commissions will be announced shortly, including the first show Natalie Ibu will direct for Northern Stage in autumn 2021.

Throughout 2021, Northern Stage will also work with English Touring Theatre to explore the untold stories and colonial past embedded in our city’s architecture. Natalie says: “We’re serious about our commitment to being anti-racist and we want to hold space for the city and this region to think and talk about its colonial past, so we will be working with English Touring theatre and North East artists throughout the year to explore what that means. Watch this space.”

Northern Stage is working with Vici Wreford-Sinnotfrom disabled-led theatre company Little Cogto make the new programme as accessible as possible. This will include captions, audio description, BSL at live events, content warnings and relaxed approaches to the programme and time frames for workshops. Vici says: “It’s vital that theatre companies and venues take creative experimentation to their hearts as we navigate unknown territories in the future of theatre, and that we think about everyone in our audiences. Northern Stage’s bold programme is an exciting, rich adventure into what is possible when we include everyone. I’m delighted to work with them, as we let them come into our homes, as accessibly as possible.”

Natalie says, “This is us is an experiment – demanded by the moment. We’re still here and we’re going to get through this together. You can rely on us to bring you stories, no matter what.”

You can find out more and buy tickets here.