The North East remembers the visit of President Jimmy Carter to Newcastle 45 years ago. 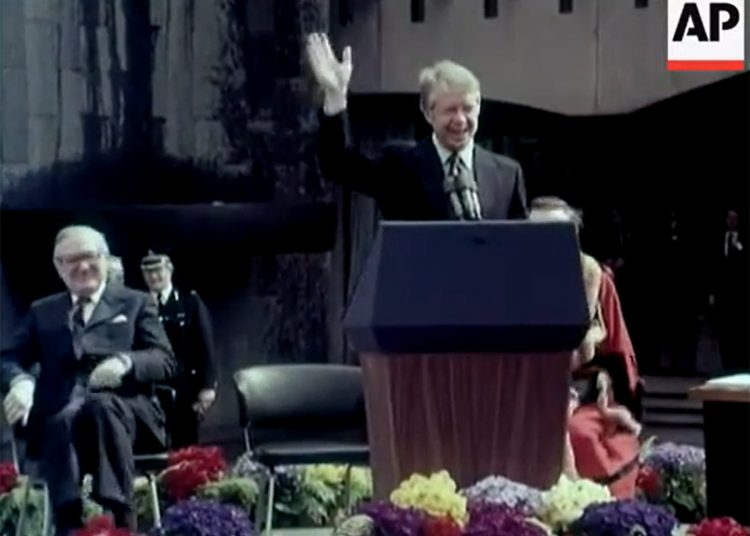 Jimmy Carter saying "Howay the lads" to the crowd with Jim Callaghan to his left and the Lord Mayor, Hugh White is just behind him. Screenshot from AP Archives

1977 was the year for the North East, first with a visit from the Queen for her Silver Jubilee celebrations in July, as well as a visit from the world heavyweight boxing champion Muhammad Ali a few days later, who paid a surprise visit to Tyneside in order to do a four-day charity tour to help raise money for local boys boxing clubs. However, there is one event that created memories for thousands of people, which is the visit from the 39th President of the United States, Jimmy Carter. This article is to commemorate this event as well as its 45th Anniversary of said event (even if it’s a bit late).

What was the reason for this visit from Jimmy Carter?

The Democrat governor and so-called ‘peanut farmer from Georgia’ had assumed the role of the world’s most powerful man on the 20th of January 1977, and the official trip to Tyneside formed part of his first foreign trip to maintain strengthen the ties between him and his country with the United Kingdom and its Prime Minister, Jim Callaghan (both sharing a first name was more than likely a nice bonus).

Another incentive for President Carter to visit was the fact that the First Lady (Carter’s wife), Rosalynn, had launched the Friendship Force. Friendship Force is a non-profit cultural organisation focused on promoting understanding and cultural education through homestay Journeys and personal friendships. Newcastle was in fact one of the first cities to become involved, with exchanges involving 762 travellers were due to take place with Atlanta, Georgia. With this mind it is quite clear as to why the Carters were keen on visiting. This organisation is still up and running as of writing this article however Newcastle upon-Tyne is unfortunately no longer part of said organisation.

What was the structure of the visit?

At around 9:40 am, President Carter’s plane, the Boeing 707 landed at Newcastle airport, from which he stepped out very briskly to greet the British Prime Minister, shown by the fact that the red carpet was still being rolled out when President Carter left the plane.

At 10:15 am, President Carter and the Prime Minister arrived at the Newcastle Civic Centre, where they both expressed their friendships, and famously President Carter said, “Howay the lads” and was awarded with an ecstatic reception from the 20,000 strong crowd gathered there. The Lord Mayor, Hugh White, also made President Carter an honorary freeman of the city.

After around 30 minutes President Carter and the PM both headed to Sunderland, where the President received a lesson in glass making from the employees at the Corning glass factory. Mr Carter was then given a high-quality crystal called Duben, which was a common gift given to heads of state, and a sculpture depicting St George and the Dragon, created by an employee at Cornings, Andy Thompson. Afterwards, Mr Carter went back into the crowd for more handshakes and greetings.

Mr Carter was very humbled by the reception he received as he commented:

“The expected friendly and polite welcome became a love fest. This was one of the high points of my first year as President.”

Did President Carter take a liking to the North East?

This visit must have made a great impact on him as ten years after the visit, in 1987, and six years after his Presidency had ended, President Carter returned to Newcastle. There was a ceremonial procession through the city on that second occasion, and the former President stayed with a local family, in the spirit of the Friendship Force, as did his daughter Amy and other relatives throughout the years.

Even though the Newcastle branch of the Friendship Force closed in the mid-2010s, there have been moves in an attempt to re-establish that connection.

Indeed, in a letter to the Newcastle councillors David Faulkner and Nick Forbes,  President Carter wrote:

“My hope is that the Friendship Force exchanges between your community and your sister community of Atlanta will be resumed and will continue in future years.”

Currently Jimmy Carter is 97 years old (turning 98 on 1 October). He is also the longestretired President in US history, having left office in 1981. Even though his presidency may have been short and may have been received rather negatively by historians and politicians alike, he will still be remembered fondly by the people of the North East for the rest of their lives.

The Crossrail Elizabeth Line and 'levelling-up'