What is very encouraging is that the final contest is between someone of colour and a woman.  That is a major change for the Tory Party. They are still pretty elitist, though, since both of them went to Oxford.  Still a requirement for Tory leaders. 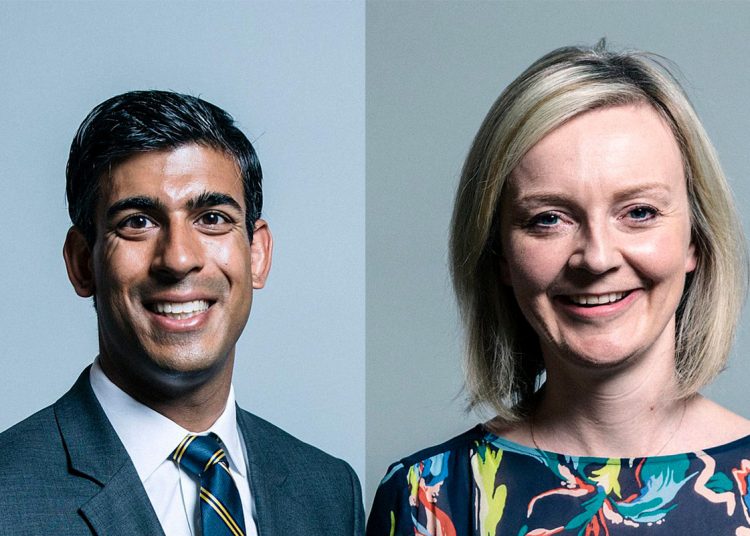 I suppose the public spectacle of cats fighting in a sack makes for good entertainment, but it is hardly edifying for those concerned about politics and the future good of our country.  It has been a strange debate, with all the candidates calling for a “new start” as if they had not been around for the last three years when most of them had actually been members of the government they are now rubbishing.

We have seen Rishi Sunak talking in a superior manner about how to run the economy, Liz Trust showing she does not understand economics, (as Kevin McGuire said, up to her neck in a puddle), Kemi Badenoch being lively, and Penny Mordaunt looking elegant and trying to avoid saying very much. How many times did we hear that Tom Tugenhat had been in the army? There were not many policy ideas, although some commitments which may not have been thought out, such as Tom Tugenhart earlier promising to build HS2 to Scotland, and Penny Mordaunt promising to create millions of green jobs, something which sounds like Labour policy.

What is very encouraging is that the final contest is between someone of colour and a woman.  That is a major change for the Tory Party. They are still pretty elitist, though, since both of them went to Oxford.  Still a requirement for Tory leaders.

All the candidates stress the importance of Tory Principles.  It might be worth thinking about what they are.  The term Tory was first applied to Royalist supporters after the English Civil War, but generally in the eighteenth century referred to those who supported the king and aristocratic landowners, and generally did not like reform.  This changed with the Reform Bill of 1832, piloted through the Commons by our own Earl Grey who was a Whig. This effectively began the shift in power away from the aristocracy to the middle classes.  The Tories had to change, and in 1834 the then leader Peel issued his famous Tamworth Manifesto. stressing the timely reform of abuses, the necessity of law and order, an orderly system of taxation, and the importance of both landed interests and trade and industry.

Later Disraeli, of “One Nation Toryism” fame, in the 1860’s stressed in his novels this need to support industry rather than the old landed interest, and look after the whole of society. He also supported enthusiasm for Empire as a way of uniting the country.

We can trace modern Toryism from these events.  Harold Macmillan is the best known “One Nation” Tory, building more council houses than Labour did. One Nation Toryism still meant that the rich would be in charge, just be nicer to the rest.

Where are we now?

So where are we now?  Tory governments have always supported individualism, talking much about liberty, but in recent years have stressed their support for such collectivist systems as the NHS as well.  They have not always produced the necessary funds though. Our society is a curious contrast, going on about liberty and individual freedom, while at the same time supporting a collective system like the NHS where everyone helps everyone else. Enthusiasm for Empire has been replaced by hostility to Europe as a way of uniting the country.

In recent years the ideas of “levelling pp”, to appeal to voters in the north, and action to stop climate change have gained traction, but not all Tories agree with them.  Recent events in both this country and Europe have shown how important climate change is, and although some of the candidates have downplayed it, Penny Mordaunt made a commitment to achieve net zero by 2050

Levelling up has hardly been mentioned at all, and I wonder whether this is because the majority of the people who actually select the leader, the Tory Party membership, do not like it very much.  There are less than 200,000  of them. According to the latest figures 63% are male, 37% female, 39% are over 65, over half live in the south and only 20% live in the north. It is not difficult to see that many members would rather see things done in their own areas than the north.

The main issue in the debates now seems to be reducing tax.  Rishi Sunak (and most economists) have pointed out this is not very practical at the moment.  It is also fairly clear that if the Party is to continue to aspire to present ambitious policies such as dealing with climate change and levelling up to the electorate, it cannot also commit to cutting taxes as well.

The tax system can be reformed.  Domestic and business rates are long overdue for reform but the rather strange idea propagated by Liz Truss in particular that removing restrictions and lowering taxes will somehow lead to the huge expansion of growth she trumpets in her book “Britain Unchained” is simply fanciful.  Improving productivity, which would generate more growth requires investing more in training and better equipment. More funds are needed again.

The challenges we face ahead are difficult and life will not be easy.  I hope therefore that whoever emerges from this arcane selection process realises this and does not try to provide apparently attractive but unworkable solutions.  We have had enough of that with Boris Johnson.