A look at the history of trade unions from 1979 with the Thatcher government to New Labour. What changed and why. 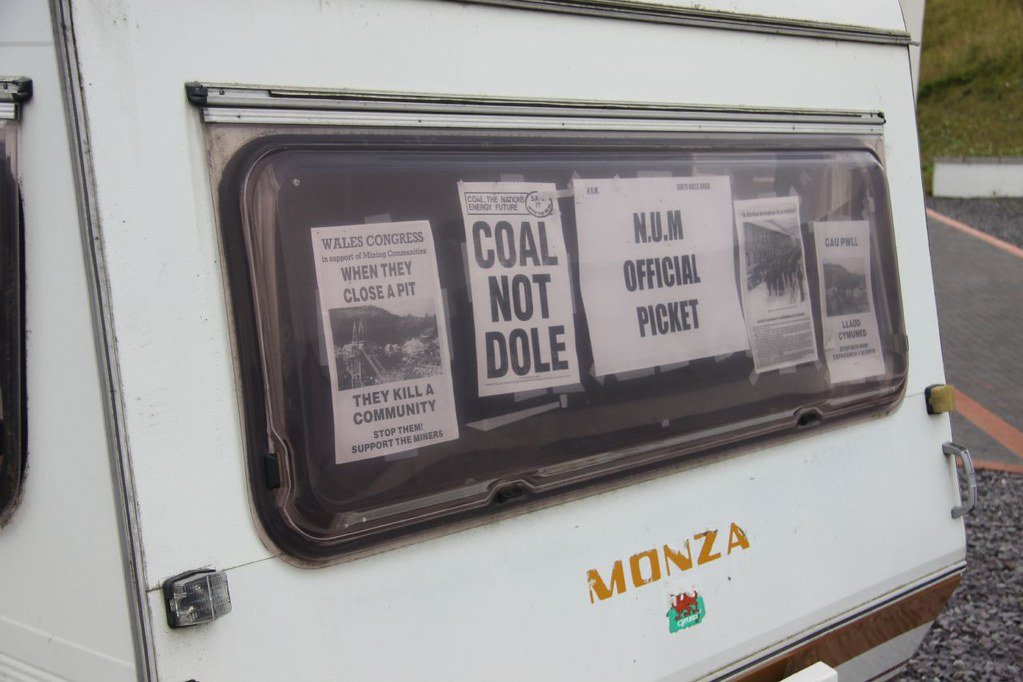 "Coal Strike '84 Caravan" by ultraBobban is licensed under CC BY-NC 2.0

With the election of a Conservative government in May 1979  a new style of PM – Margaret Thatcher was committed to restructuring the UK economy by creating more flexible and efficient labour markets. Thatcher was pledged to reform Britain’s trade unions and curb their power.

Throughout the eighties conflict between organised labour and the Conservative government became a prominent feature and of the economic and political landscape. There were two elements to Mrs Thatcher’s assault on union power. One was to confront their leadership. The other, was to implement far reaching legislation to curtail their power.

Thatcher was noted for lecturing the trade union leadership about the realities of ”supply-side economics”. She also sought opportunities to mobilise the forces of the state against organised labour. Although there were several examples of industrial conflict throughout the decade two major disputes stand out.

The print unions and the miners’ strike

The first involved the print media industry, where traditional unions like SOGAT-82, were resisting the advent of new technology. Printer’s unions feared that the new technology would result in fewer jobs. Powerful newspaper owners, like Rupert Murdoch, reacted by bringing in non-unionised labour which had the skills needed to operate the modernised equipment at a new site, Wapping. But the government backed Murdoch, ordering the police to ensure that the new labour force would be able to work against mass union picketing. The traditional print unions were crushed.

The other major conflict was arguably more traumatic. The nationalised coal industry was suffering from tough competition from cheap imported coal from abroad. The miners’ union, the NUM, led by socialist Arthur Scargill, demanded protection for the British industry. Thatcher, committed to a neo-liberal free market economic policy based on free competition. launched a mass pit closure programme. In 1984 the miners went on strike, engaged in mass demonstrations and aggressive picketing to prevent non-unionised labour from breaking the strike. An almost militarised police force was brought in to control the mass picketing of coal mines, while the courts convicted NUM leaders of various public order offences.

One year later the NUM was heavily defeated. The strike was broken and a programme of widespread pit closures was implemented which brought huge hardship to workers and devasted the mining communities of the North of England and South Wales.

Having crushed two powerful unions Thatcher pledged further reform through a bold and radical legislative programme. Through a succession of employment acts passed in 1980, 1982, 1984, 1988, 1990 and 1993 the ability of trade unions to take industrial action was restricted. Ballots were introduced for union members while secondary industrial action was made unlawful.

The effect on trade unions

Conservative government industrial relations legislation had profound consequences for the UK’s trade union and labour movement. Union membership fell rapidly, especially when ”closed shops’ were scrapped. Employer attitudes changed. Many stopped recognising unions and abandoned free collective bargaining procedures. Over-employment in some traditional industries declined – causing mass unemployment in the North East, industrial Scotland and Wales. With much of their control restored, employers were keen to reduce wage costs by saving on labour. With weaker trade unions they were able to do this.

By the 1990s strike action and other stoppages fell dramatically. The unions lost funding as membership fell. This further reduced their power. The new legislation forced the Labour party to re-examine its strong relationship with the unions. The Conservative governments, under both Thatcher and John Major, boasted that they had won the war against trade union power and in turn had created more flexible labour markets.

Employment legislation, as Colin Crouch argued in The Politics of Industrial Relations, was a key factor in the reduction of union power. But some experts believe that the recessions of the early eighties and nineties with rising unemployment weakened the unions. Mass unemployment reduced the unions’ bargaining powers with employers.

The author Robert Taylor took a more nuanced perspective on the question of union power in Workers and the New Depression. For Taylor the unions were the main victims of their own inherent weakness. Trade union power was a myth. Industrial relations throughout the eighties, he argued was ”a shifting pattern of unequally balanced forces, where capital not labour dominates”.  One of the biggest problems afflicting union-management relationships was not the solidarity of unions but their fragmentation.

Much industrial conflict of the last three decades of the twentieth century was not so much a challenge to capitalism, but an act of sectionalism and rivalries in which strong unions were set against weaker ones.

For Taylor socialism was meant to be about equality: yet the effect of much industrial militancy, supposedly socialist in action, was actually to increase differentials. Free collective bargaining, itself a capitalist ethic, was not a battle against the capitalist social order, but a competitive struggle within the working class itself. In the absence of national and centralised method of settling wages, organised labour was crippled by it own contradictory aims. Writing in the 1980s he noted ”the tensions between free collective bargaining, self-regarding sectionalism and the aspiration to social justice, economic growth and solidarity were real.”

After 18 years of Conservative administrations Labour was returned to power under Tony Blair.

New Labour kept most of the Conservative government industrial relations legislation with a new law making it mandatory for employers to recognise trade unions at the workplace. Although some collective employment rights were not restored, New Labour promoted new individual employment rights based on the European model. Based on the notion of ”fairness not favours”, Blair’s and Gordon Brown’s governments introduced improved maternity/paternity leave rights promoting a new ‘work-life’ balance culture, better rights for part-time employees and a National Minimum Wage.

Although the trade unions were brought in from the cold, the governments of both Blair and Brown maintained some distance. The days of ‘beer and sandwiches’ in No 10 with union bosses, employers and previous Labour administrations didn’t return.

Teesside enjoys its Palmyra moment, as Redcar Blast Furnace is torn down