The Mayor of London in partnership with European Movement UK has organised a march and vigil in London this Saturday. You can sign up to show your support. 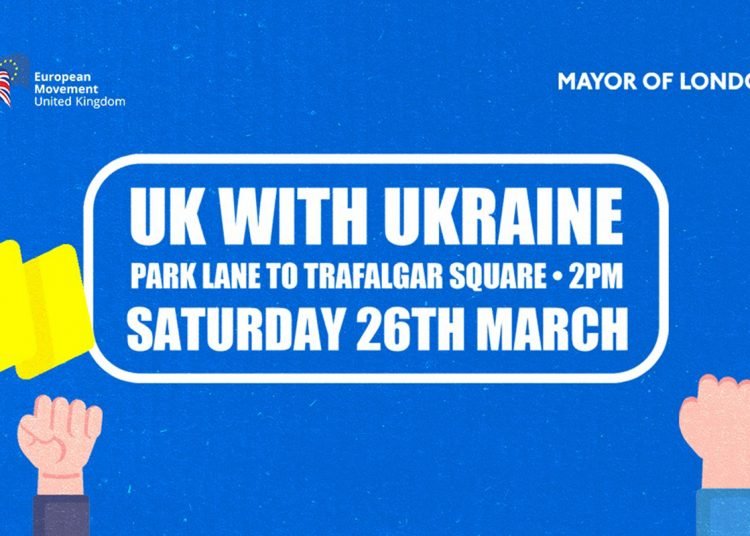 UK with Ukraine in London Image by European Movement

The Mayor of London in partnership with European Movement UK will lead a march of thousands this Saturday to send a message of solidarity to the people of Ukraine, as Ukrainian President Zelensky appealed to people across the world to show their support. You can sign up here.

London stands with Ukraine will begin with a solidarity march from Park Lane at 2pm. It will then proceed past Piccadilly Circus, where Yoko Ono’s Imagine Peace message, commissioned by CIRCA in collaboration with Serpentine, will be displayed on Piccadilly Lights. This will be followed by a vigil and speeches in Trafalgar Square from 3-5pm.

The event comes as Ukrainian President Zelensky appealed to people across the world to take to the streets in a show of support for Ukraine to mark one month of the Russian invasion.

Anyone wanting to donate to help the victims of conflict will be encouraged to donate to UNCERF, and a special Yoko Ono print will be available to buy with proceeds donated to UNCERF.

Messages of peace and unity

“It has been heartbreaking to watch this unprovoked and shocking attack unfold against the Ukraine people over the last few weeks.

“Our capital has a long history of providing sanctuary to those fleeing conflict, and I’m proud that Londoners have already shown their willingness to help by donating money to charities and signing up to house refugees.”

“Together we will march and unite in Trafalgar Square to show our support for our friends in Ukraine and call for an urgent end to this atrocity.”

“The European Movement believes now, more than ever, that it’s time to unite across parties, organisations, faiths, beliefs and backgrounds to condemn this act of Putin’s aggression. Our duty is rooted in a belief that a closer, more united and peaceful Europe is in all of our interests. So, I hope you will join us in condemning Putin, expressing solidarity with the people of Ukraine, and participating in a march that is both sadly historic but deeply necessary. I truly think that is the least we can do.”

“It has been devastating to see this horrific ongoing attack against the people of Ukraine, and my thoughts are with them at this terrible time. It’s important that we send a message of support so that Ukrainians know that they are not alone, and I’m proud that the people of London are standing together in their name this Saturday.”

Hanya Dezyk, Board Director of the Association of Ukrainians in Great Britain said:

“We are heartened that Londoners and visitors from across the UK will be joining together in London to send a message of solidarity with the people of Ukraine. It has been incredibly difficult for Ukrainians living in the UK and across the world to see what is happening to our homeland, and the sight of people uniting in the streets in our name gives us hope and strengthens our resolve to fight for Ukraine’s freedom.”

After Chris Kamara’s diagnosis - what is Apraxia of Speech?