The authorities deemed umbrellas to be weapons and banned them which were being used to protect from tear gas, police batons, and surveillance cameras 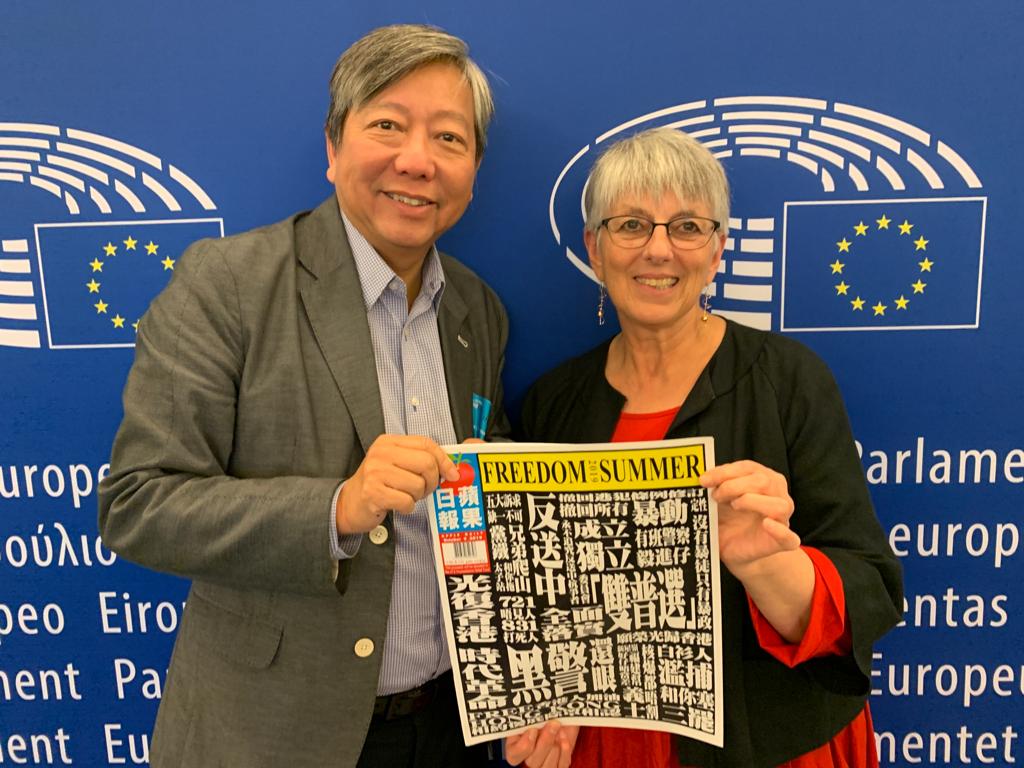 There is a new hashtag circulating on social media #FreeHK53 initiated by the Labour Movement Solidarity With Hong Kong, a collective of activists, trade unionists, academics and human rights defenders who have been working closely with grassroots pro-democracy activists in Hong Kong for 18 months and are now campaigning to raise awareness of the most recent mass arrests.

The campaign uses the symbol of an umbrella as this has a powerful and symbolic potency in Hong Kong. Umbrellas have been used historically at protest marches in Hong Kong since 2014 when the pro-democracy movement began to mobilise street campaigns in the city following Beijing’s insistence on approving candidates for election to the legislature, making a mockery of the democratic process they agreed to uphold via the Basic Law which came into force on July 1st 1997.

In 2019, following renewed protests in the wake of a proposed controversial extradition bill which would have seen Hong Kong citizens who fell foul of the law subject to judicial process in mainland China, the authorities deemed umbrellas to be weapons and banned them. The umbrellas were in fact being used to protect the carriers – from tear gas, police batons, and from the prying eyes of surveillance cameras. However, many more things in addition to umbrellas have been banned in Hong Kong in the past 18 months as the puppet government, led by Beijing’s official mouthpiece Carrie Lam, ramp up their crackdown on pro-democracy opposition voices.

The government ban extends to school students who have been ordered not to sing, chant slogans or form human chains, amongst a raft of so-called subversive activities laid out by the Education Minister in response to extensive youthful protest. Pro-democracy books have also been removed from libraries in an act that is more akin to the dystopian world conjured up by American author Ray Bradbury in “Fahrenheit 45” than something we expect in our 21st century connected world. Meanwhile the so-called Great Firewall of China was employed to control internet use, causing tech firms to exit the Hong Kong market and users to erase their digital footprints.

Although the 2019 extradition bill was eventually dropped it was too little too late. Lam only reluctantly backed down after a sustained and vibrant street movement had alerted many citizens to the ambitions of the Chinese Communist Party which seeks to limit the democratic liberties that had been allowed to grow in the final years of British colonial rule before ‘handover’ to China and since 1997.

I am not praising British imperialism here as our entanglement in far flung corners of the world is a continuing stain on our country, but Hong Kong youth in particular want to enjoy the freedoms that many young people have in our globalised connected 21st century world. In fact, the university and college campuses have seen some of the most striking campaigns over the past few years, with the siege of the Polytechnic University raising issues of serious human rights abuses such as forced disappearances.

As peaceful students were locked inside the building and worried parents came to search for their offspring in the vicinity, messages began circulating on social media. I was shocked to receive a desperate plea via a WhatsApp message from a young woman inside the polytechnic who talked of her fears about being ‘disappeared’.

Even though Hong Kong is supposed to enjoy the special status of ‘one country – two systems’ under an agreement signed with the British government when the territory was given back to China, the civil liberties and freedoms that Hong Kong citizens prize so dearly are being increasingly threatened by an overbearing one-party state, largely hostile to multi-party democracy.

Prominent pro-democracy campaigners have attracted international attention. In the European Parliament during my time as a MEP we had several emergency debates and resolutions in response to the unrest and the violent crackdown on protesters. I spoke in the chamber on September 16th in 2019 and, through my connections with the nascent Labour Solidarity with Hong Kong campaign, I was able to give a timely update on the situation appertaining to the Cathay Pacific cabin crew whose jobs were under threat due to their trade union activity.

The head of the Hong Kong Confederation of Trade Unions, Lee Cheuk Yan, later came to Brussels at the invitation of the European Trade Union Congress, and had meetings with several progressive MEPs. He outlined the serious situation facing democracy activists and human rights defenders in an increasingly hostile environment where civil society space was being severely limited. Lee has subsequently been criticised, harassed, detained and arrested several times. In a recent exclusive interview for Byline Times he talked about his dreams for a more democratic Hong Kong and his fears that worse is yet to come.

One of the most articulate and high-profile pro-democracy campaigners, Joshua Wong, gave evidence of his experiences at the hands of the Hong Kong authorities to the European Parliament’s Human Rights Sub-Committee via skype in December 2019. He had been due to attend in person but was prevented from travelling by a state order. Wong has been arrested multiple times by the Hong Kong authorities, most recently on January 7th, although he was already in prison serving a 13.5 month sentence for his part in the 2019 protests which he did not deny but defended as a human right.

Regardless of Brexit the EU’s strong pivot to human rights continues to provide an international platform for condemnation of state-sanctioned violence and limits to civil liberties, even though some might say that Hong Kong is a bi-lateral issue between China and the UK. It clearly is not as human rights is a universal issue that should concern us all. Notwithstanding the less than perfect human rights clauses in the recently signed EU-China trade deal, the EU High Representative has nevertheless responded promptly to the long litany of abuses of power in Hong Kong over the past few years with a consistent message, most recently releasing a statement on January 7th condemning the mass arrests.

Whilst the UK is largely sympathetic to Hong Kong’s democracy protesters there are complexities and nuances across the political spectrum which create difficulties for a more joined-up approach. The Conservative-led Hong Kong Watch is sadly timid in its approach with scant support for trade unionists and grass-roots activists.

Some on the radical Left meanwhile have retained an unfortunate soft spot for the Chinese regime, failing to recognise that the People’s Republic of China is a grossly capitalist one-party state that encourages exploitation of workers by global corporations and promotes genocidal policies towards minorities such as the Uiyghurs. That same section of the far left trumpet slogans about peace, justice and human rights but remain silent when it comes to China and Russia, or worse still deny the very evidence emanating from the victims of repression themselves.

The anti-China rhetoric of Donald Trump might have seemed appealing to some Hong Kong protesters and supporters but in its wake has come a wave of Sinophobia with the disgraced President’s frequent labelling of the coronavirus pandemic as ‘the China flu’ seen as a licence for xenophobes, racists and far right groups to commit acts of violence against all those perceived to be Chinese. The new administration in the White House will hopefully pursue a more measured approach focusing on human rights, social justice and democracy rather than taking racist pot-shots.

The most recent development however, requires urgent attention from all of us who truly care about the parlous state of democracy in the world. Last year a new National Security Law came into force, imposed by Beijing. The law provides sweeping powers which threaten the very basis of Hong Kong as an autonomous region. Under the law’s 66 articles offenders can receive life sentences to be served in a Chinese jail for acts of subversion, perceived terrorism, collusion with foreign actors and anything which threatens secession from mainland China.

During the first week of January more than 53 Hong Kongers were arrested on suspicion of breaking this law, mostly as a result of their political actions in 2019 when they organised and stood in primaries ahead of a planned election in order to go to the polls with a slate of pro-democracy candidates. Amongst those detained were journalists and trade unionists.

The election was cancelled, as has been the case with many other elections around the world during the pandemic, but with Covid-19 infection and death rates in Hong Kong being one of the lowest in the world, this has all the hallmarks of a purge targeted at a putative opposition that would very likely have presented a serious challenge to Beijing.

The trial is set to begin in February and, in an extraordinary development, it has been announced that the high profile British lawyer and QC David Perry will act for the prosecution, presumably for a princely sum paid for by the communist People’s Republic of China. You couldn’t make it up and even some in the Conservative establishment have criticised Perry.

The Hong Kong pro-democracy movement needs all our support right now. It comprises people just like you and me – workers, trade unionists, entrepreneurs, journalists, teachers, students, parents – who simply want to participate fully in democratic life.

To find out more sign up for email updates here, attend an online rally on January 30th where you can hear from speakers such as former Shadow Chancellor John McDonnell and Lee Cheuk-Yan himself. Meanwhile please flood social media with the hashtag #FreeHK53

The glass ceiling hasn’t been smashed but it is fracturing